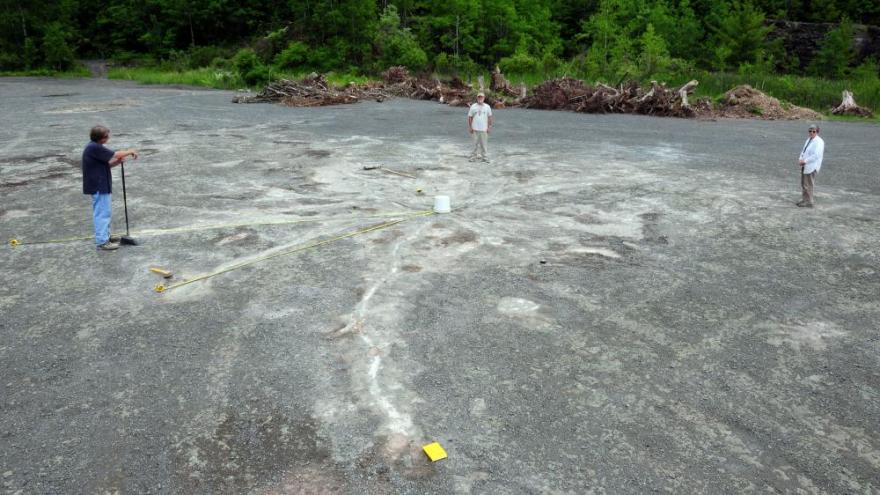 Scientists stand on the edge of an Archaeopteris tree root system. They put the bucket where they think the tree's trunk was located.

(CNN) -- Evidence of the world's oldest forest, dating back some 385 million years, has been discovered in an abandoned quarry in upstate New York, according to a new study published in Current Biology.

The fossilized roots-- footprints of an ancient landscape-- belonged to trees with wood and leaves, similar to what we see today, the study says.

This find was made in Cairo, about 40 miles south of Albany. Previously, scientists thought a fossilized forest in Gilboa, New York, was the earliest, but the one in Cairo is two or three million years older and dramatically different.

A person from the New York State Museum was the first to spot the large, root-like structures in the bottom of the quarry.

Christopher Berry, study co-author and a paleobotanist at Cardiff University in the United Kingdom, told CNN he was a bit skeptical the first time he visited the site. He thought a modern tree might have grown into the rock and been removed.

Upon closer inspection of the soil profile, researchers quickly confirmed they were looking at the footprint of something much, much older.

"The scale of the root systems were really striking," said William Stein, lead author and emeritus professor of biological sciences at Binghamton University, located about two hours west of Cairo.

The team carefully swept away layer upon layer of dirt, meticulously mapping the extraordinary find.

The team hypothesizes a catastrophic flood killed most of the trees in the forest and preserved the root system as fossils. They even found fish fossils near the largest trees.

What an ancient forest teaches us

The discovery provides a snapshot of one of the planet's great transitional periods, between an earth with no forests and an earth that's covered in forests, Berry said.

During the middle of the Devonian period (about 419 to 359 million years ago), Berry told CNN, the Cairo forest was actually located about 30 degrees south of the equator, in between a temperate and arid climate.

Ultimately, they identified three types of trees, two of which were unique to the site, pointing to an ecology distinct from the nearby Gilboa site.

"With the advent of forests, we see a major shift in the kind of ecology that the earth has... both in the terrestrial and the marine realm," Stein told CNN.

During the Devonian, scientists say a drastic drop in CO2 levels led to a cooling of the earth, which may have caused an extinction at the end of the period.

"That's sort of the opposite of what we're experiencing today, with the possibility of an extinction as well," Stein said. So in that sense, history matters. If we look at the origin of these forests and their effects, and particularly the plants themselves and what they're doing, we may have an insight into processes that are going on today."