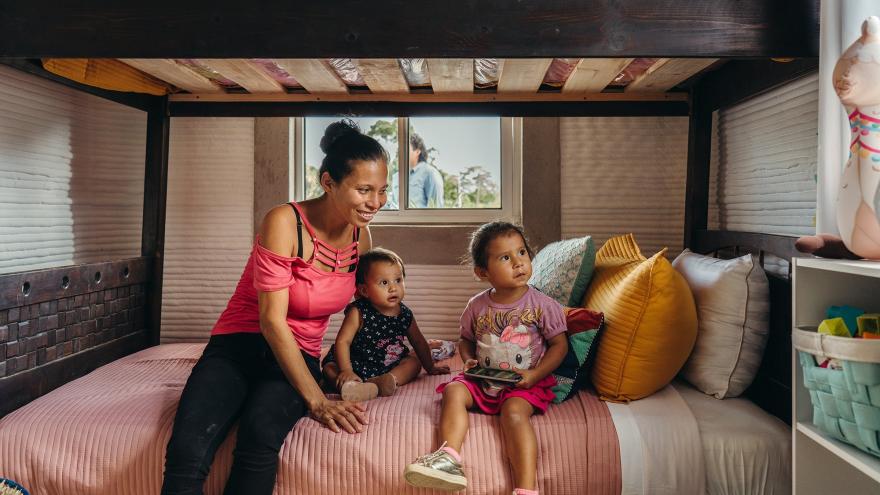 (CNN) -- A giant 3D printer built two houses in an impoverished, rural part of Mexico last week, breaking ground on what will be the first 3D-printed neighborhood in the world.

The houses aren't just a prototype. Developers hope to build 50 new houses by the end of 2020, replacing the structures that residents built themselves out of wood, metal and whatever materials they could afford.

The families live in a seismic zone that's prone to flooding in the state of Tabasco, Mexico. Building something that will withstand an earthquake and keep them dry during heavy rains was a key consideration when it came to the design.

"These families are the most vulnerable, and in the lowest income ... and they're living on about an average of $3 a day," said Brett Hagler, CEO and co-founder of New Story, the nonprofit building the community.

"They're living in literally a pieced-together shack that during the rainy season, it will rain and it will flood their shack. Some of the women even said that the water will go up to their knees when it rains, sometimes for months," Hagler told CNN on Wednesday.

New Story is a nonprofit that helps families in need of shelter. It has built more than 2,700 homes in South America and Mexico since it was founded in 2014. This is the first home building project it's done with 3D printing.

The nonprofit paired up with ICON, a construction technology company that developed the 3D-printing robotics being used on the project. ÉCHALE, a nonprofit in Mexico, is helping find local families to live in the homes.

The homes were co-designed with input from the families that will live in them.

The 33-foot printer pipes out a concrete mix that hardens when it dries, building the walls one layer at a time. It takes 24 hours over several days to build two houses at the same time -- that's about two times faster than it takes New Story to build a home with regular construction.

The concrete mix is sturdier than traditional concrete, New Story says. The foundation is reinforced to withstand seismic activity.

The flat-roofed homes are reminiscent of a southwestern design, but with curved walls. The 500-square-foot homes have two bedrooms, one bathroom, a living room and a kitchen. People haven't moved into the new houses yet, New Story says, because it would be dangerous for them to live in a construction zone.

There's no price tag on the homes yet, but New Story says it's working with families to have them pay 20-to-30% of their income. They want people to have a sense of ownership in the community.

The printer is named Vulcan II and it was made by ICON, an Austin-based construction technology company. It took three years of prototyping to get a printer capable of this project, the company said.

The speed of home building with the printer has gotten quicker. In March 2018, New Story and ICON revealed a three-bedroom home, which took 48 hours to build.

"It's 10 times better than we were a year ago. I am so proud," ICON CEO and co-founder Jason Ballard told CNN on Wednesday. "It is so rare that the-most-in-need of our sisters and brothers globally get first access to advanced technologies and breakthroughs in materials science."

Because 3D printing is cheaper and faster than traditional construction, there's great potential for how it will change the world, he said.

"We think part of what 3D printing allows us to do is to deliver a much higher-quality product to the housing market at a speed and price that's typically not available for people in" low-income housing, Ballard said. "It is a house that anyone would be proud to live in."

Taking a printer out of the lab and putting it in the real world was an experiment in itself. Getting Vulcan II to the construction site and dealing with harsh weather conditions has been the biggest challenge so far, he said.

The massive printer was transported in a standard shipping container. Border authorities had a lot of questions when they saw it, New Story said.

It arrived at the peak of summer, right as the rainy season was beginning, Ballard said. The machinery and the staff faced floods, muddy roads and high humidity as they settled in. The logistical challenges made him realize how much we take for granted in America.

"When you're doing anything for the first time ever ... and we're doing a challenging place, there's no blueprint or road map or set of instructions, so you're creating all of that as we go," Alexandria Lafci, New Story COO and co-founder, told CNN.

The nonprofit staff believes in the promise of what the technology could mean for people who don't have safe shelter. Hagler said safe shelter is "one of the largest crises affecting humanity today."

About 1.6 billion people in the world don't have adequate housing, according to a 2015 Habitat for Humanity study.

"We have some of the brightest minds and we have the most promising technology in Silicon Valley working on elite problems. How can we rethink and reshape existing and budding technology toward these more pressing issues?" she said.

The technology is there and the application to building homes for those in need brings a lot of hope for the future.

"3D printing is not science fiction. We have crossed that threshold from science fiction into reality," Ballard said. "In the future, our bet is that this will be humanity's best hope for a housing solution that that matches our highest values and ideals."