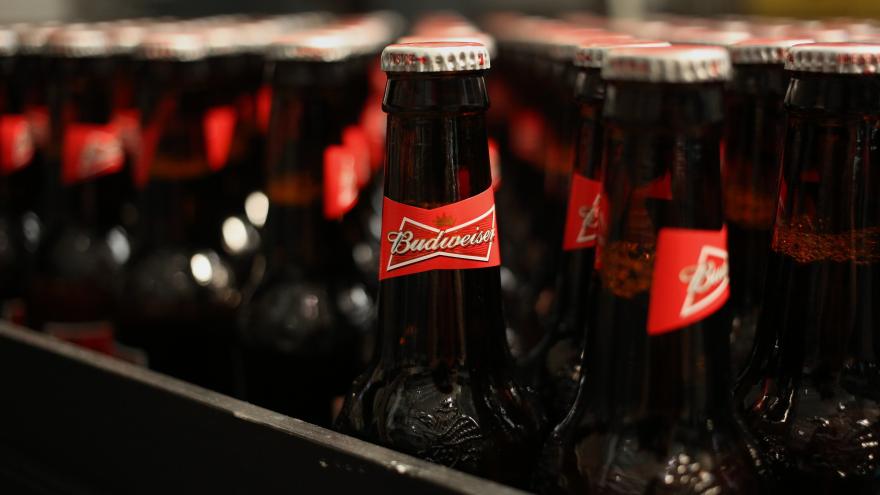 (CNN) -- Could Budweiser drinkers soon be swapping beer for pot?

It's the latest major company to start exploring the pot market following decisions to legalize recreational marijuana in Canada and a number of American states. AB InBev and Tilray will invest a combined $100 million into researching non-alcoholic drinks containing cannabis elements.

"We intend to develop a deeper understanding ... that will guide future decisions about potential commercial opportunities," Kyle Norrington, president of AB InBev's Canadian subsidiary Labatt Breweries, said in a statement.

For now, AB InBev is only looking at using cannabis ingredients in Canada. The company, whose top brands include Bud Light and Stella Artois, will make a decision on whether the pot products are commercially viable at a later date.

Tilray's Nasdaq-listed stock surged following the announcement of the tie-up, gaining about 13% premarket on Thursday. The company, which is based in British Columbia, specializes in medicinal cannabis products.

Its stock has more than quadrupled since it went public on the Nasdaq in July. The company's backers include billionaire investor Peter Thiel's venture capital firm Privateer Holdings.

Other big consumer brands are looking into how they can capitalize on loosening restrictions on cannabis products.

With Democrats winning control of the US House of Representatives, Congress may finally pass the Farm Bill, which would make it legal to produce hemp and potentially open the door for more products containing cannabidiol (CBD), a element found in cannabis.

One top consumer brand resisting the pot rush for now is Coca-Cola (KO). CEO James Quincey said in October that it "doesn't have any plans at this stage" to enter the cannabis market.

Belgium-based AB InBev has been looking for ways to juice up its sales as consumers increasingly turn to craft beers and microbrews. That's hurt sales for mass-produced beers like Budweiser and Bud Light.