'The World Without Us': The abandoned sites overrun by nature 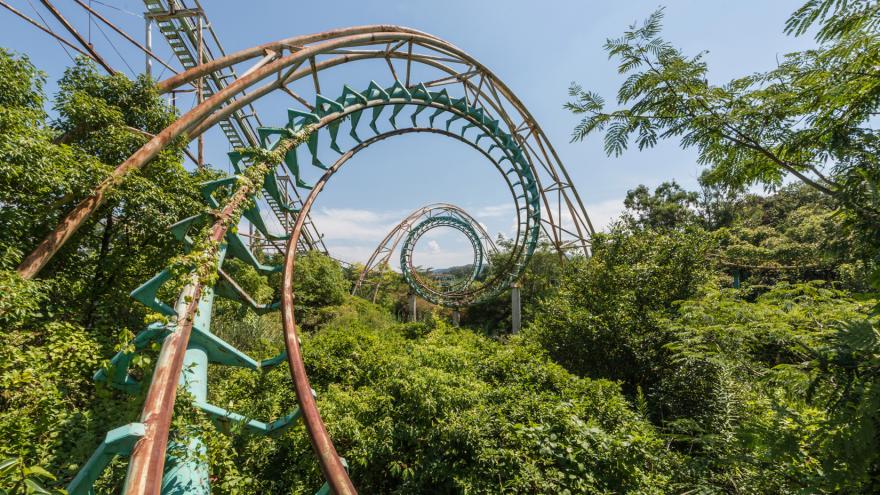 Editor's note: Sign up for Unlocking the World, CNN Travel's weekly newsletter. Get news about destinations opening and closing, inspiration for future adventures, plus the latest in aviation, food and drink, where to stay, and other travel developments.

(CNN) -- The notion of what the world would look like if humans were to vanish has been explored extensively by scientists, as well as many post-apocalyptic movies.

However, French photographer Romain Veillon is making it his mission to capture in pictures the potential result of a planet without people.

The 38-year-old has spent years photographing abandoned places around the world that have been overtaken by nature, with eerily beautiful results.

For his latest book, "Green Urbex: The World Without Us," Veillon shot a series of deserted and/or forgotten spots, including a ghost town in Namibia, an abandoned cinema in Brussels, a dilapidated Tuscan villa and a disused railway track in Ukraine.

He hopes the haunting images will serve as a reminder of the "necessity to live in harmony with our habitat," as well as highlight the importance of working with rather than against nature.

"We are all fascinated by this post-apocalyptic vision," he says. "Maybe we need to be the witness of that to enjoy what we have and the time in front of us."

The book, which is only available in French at present, is divided into three different sections. The first showcases deserted places that remain relatively well preserved and the second focuses on dilapidated sites in a far worse state.

Finally, the third section is made of images of long-forgotten places that have been completely overrun by vegetation.

"The photographs were all shot during the last 10 years," Veillon tells CNN via email. "It's really a mix of all the places I have been documenting since I started."

His fascination with abandoned places began at an early age, when he discovered a deserted truck factory near Paris.

Although the book, which contains over 200 images, provides some historical background to a number of the sites, the photographer says he tries to offer as little detail as possible so that people can "make up their own answers" to any questions they may have.

"Each story will be different from the other, and that's what I love," he adds.

However, capturing deserted spots in so many different, and often remote, corners of the world is far more complicated than just picking up a camera and hitting the road.

Veillon sometimes spends months researching lesser known sites and pinpointing their exact location, not to mention applying for authorization to photograph some of them.

"I spend hours searching for historical clues that can help me locate the location I want to photograph," he explains.

"There's a huge amount of time [spent] on Google Maps trying to see if some buildings might be buried under vegetation. And just driving around when you're in a new area can also bring some nice surprises."

Having friends all over the world has also proved useful to the photographer, who often receives tips from other travelers, and sometimes his social media followers, on potential sites to include in his work.

One of the highlights from the book is an image of Buzludzha, an abandoned Soviet monument in Bulgaria, which Veillon says was one of his favorite places to photograph.

"Buzludzha is for sure the most extraordinary and unique place I have ever been to," he says of the former Bulgarian Communist Party headquarters built atop a mountain.

"From the outside, it looks like a UFO, and inside, you find the most beautiful mosaics."

Romania's defunct Constanța Casino, which has been designated as a historic monument by the Romanian Ministry of Culture and National Patrimony, also left a lasting impression.

"I was so surprised to see the remains of the old casino stage, the wonderful chandeliers or the ornaments of the grand staircase," he admits.

Veillon's haunting images of Japan's Nara Dreamland, taken around a decade after the theme park closed in 2006, have garnered the most attention.

"This is a perfect example of what I want to show when we say 'nature is taking over," he says. "You can see ivy slowly covering the roller coaster like it is getting eaten by it. The park was destroyed [between 2016 and 2017] not long after my visit, so it makes the photograph even more iconic I think."

While the travel restrictions brought about by the pandemic have meant that Veillon's travels have been few and far between of late, he hopes to visit ghost town Akarmara, a former coal mining village in Abkhazia, Georgia that's been overtaken by trees, in the near future.

"It [Akarmara] is the one journey I should have done a long time ago," he says.