The whitewashing of Arab Americans impacted by Covid-19 is a catastrophic public health issue, experts say 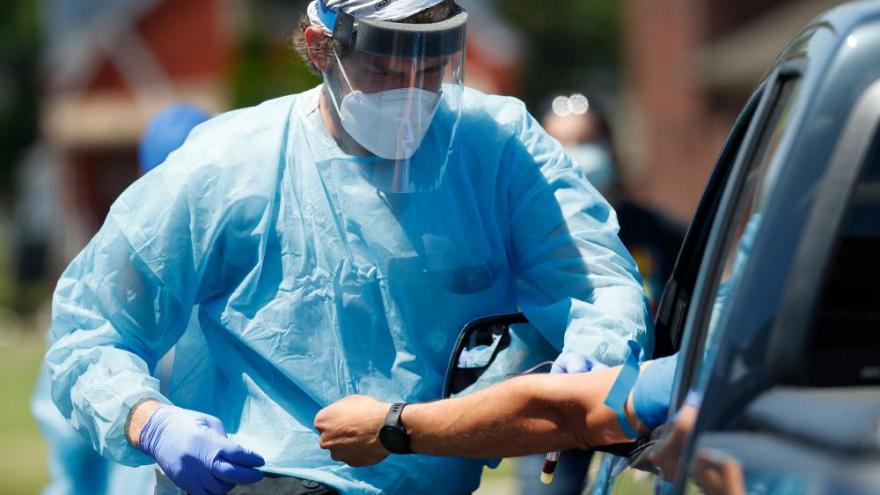 The whitewashing of Arab Americans impacted by Covid-19 is a catastrophic public health issue, experts say. A volunteer, in this image, draws blood for antibody testing for Covid-19 in Dearborn, Michigan, last year.

(CNN) -- Dr. Raed Al-Naser was on the front lines at Sharp Grossmont Hospital in San Diego when patients first started coming in with symptoms of Covid-19.

"The hospital was packed and the ICU was at full capacity," the ICU pulmonologist told CNN. "And I saw a disproportionate number of Arab Americans in the ICU."

This realization, and a lack of public health data on the Arab American community, motivated Al-Naser to conduct his own research based on the patients he was seeing at Grossmont Hospital and his own private practice.

"There is a large Arab American community nearby in East San Diego, specifically in El Cajon county," Al-Naser said. "And because there is no identifier for the group, they're all being counted as White Covid-19 patients and no one was noticing how the virus was specifically affecting this population."

Based on the standards set by the Office of Management and Budget (OMB), there are seven categories for data on race and ethnicity: American Indian or Alaska Native, Asian, Black or African American, Native Hawaiian or Other Pacific Islander, White, Hispanic or Latino, and non-Hispanic or Latino, according to the 2020 Census program memorandum. As a result, Arab Americans are forced to tick "White" or "other" on the Census and medical paperwork, which means that public health data collected on the community is largely anecdotal, according to experts like Al-Naser.

Arab Americans trace their origins to the Middle East and North Africa, which is traditionally comprised of 22 Arabic-speaking countries. They are not a monolith and can be White, Black and brown. Los Angeles and New York City have the largest populations of Arab American residents in the country based on data from the 2015-2019 ACS Ancestry survey. Both areas have been hit hard by the Covid-19 pandemic, which has disproportionately affected minority and immigrant populations.

"The Arab American community is a historically understudied group because it has no identifiers, so Covid-19 exposed the invisibility of the group rather than created it," he said. "It's key to identify people at risk or else they'll go unnoticed and the disparity will deepen."

Dr. Nadia Abuelezam, epidemiologist and assistant professor at Boston College's Connell School of Nursing, has studied health disparities among the Arab American community throughout her career.

"There are a lot of disparities in the community and they're not well known because of the whitewashing that's happening," Abuelezam said. "The lack of identifiers limit our ability to use national data sets and receive funding to understand Arab and Middle Eastern American health results."

According to a study Abuelezam published in 2020, "there are a number of reasons why Arab Americans may be at increased risk of COVID-19 infection, complications, and death, including exposure to xenophobia and stigma, pre-existing conditions," like diabetes and hypertension, "multigenerational homes," lack of social support for new immigrants, and poor adoption of prevention behavior," which includes vaccine hesitancy.

New York resident Mohamed Madboly, 26, is all too familiar with this as a first-generation Arab American.

Last year, Madboly, his diabetic father and his mother, who has hypertension, all became infected with Covid-19.

"I feel like America is intentionally neglecting Arab identities," said Madboly about the lack of data on the community. "We're blinded from our own statistics. This makes it very difficult for experts to draw accurate conclusions to help our community not only improve but get better. Especially in a time like now, where we need it more than ever."

Although public health data on the community is limited, prior samplings and independent studies show that Arab Americans' health outcomes and needs are distinctly different from the outcomes of White non-Hispanics, according to Abuelezam's study.

A hospital-based study in Michigan found that Arab Americans have a higher prevalence of preexisting conditions like diabetes and hypertension than in White communities. Researchers also found in a study on Arab Americans in California that 55.2% of the respondents were overweight or obese, another condition that can mean increased risk and severity of Covid-19 and death.

Also, Arab American homes are more likely to be multigenerational than non-Arab homes, which can "lead to greater transmission risk within households to older individuals, increasing vulnerability to infection," according to Abuelezam's study.

There is also a lot of vaccine hesitancy within the community, which is corroborated by national data for flu and pneumonia vaccines, according to a study from the National Library of Medicine published in 2014.

Research done by Al-Naser in East San Diego also found that most of his Arab American patients were socioeconomically underprivileged and had less access to insurance than his Black and Hispanic patients.

So, not only is asking Arab Americans, like Madboly and his parents, to identify as White inaccurate, but it can also skew Covid-19 data, according to Abuelezam and Al-Naser.

Arab Americans and the Census

Advocacy groups, such as the Arab American Institute (AAI) and the American-Arab Anti-Discrimination Committee (ADC), have been pushing for a Middle East and North Africa (MENA) categorization, which is a geographic designation that includes ethnic and racial options, to be adopted by the OMB for decades.

Although the Census Bureau does not include identifiers for the community, it estimated MENA Americans at 3.1 million in the 2015 census.

"It's definitely an undercount," Maya Berry, executive director of the AAI, told CNN. "The Census is about providing an accurate count of the community, so that its members can participate fully in our democracy. The limited publicly available data has always been used against the community."

Samer Khalaf, president of the ADC, which estimates Arab Americans at the 4.5 million range, agrees.

"It's an underserved community when it comes to social programs and mental health programs, because we can't get the proper finances and resources to help the community," Khalaf said. "And it's not different with Covid. How can we tell how hard-hit the community is? How do we advocate for a proper allocation of resources, like the vaccine, in these communities if we can't show what our concentrations are?"

Advocacy groups expected the adoption of a MENA category in 2015 and 2017, according to Khalaf, but the OMB abandoned the motion upon the emergence of the Trump administration.

CNN has reached out to the OMB for comment.

The Biden-Harris administration drafted a "plan for partnership" with the Arab American community prior to its election pledging to "support the creation of a new Middle East North Africa (MENA) category, which was recommended by the U.S. Census Bureau in 2017, so that Arab Americans can be more fairly counted and their needs studied and considered alongside other minorities."

"The Trump Administration politicized the 2020 Census, putting marginalized communities at risk of a drastic undercount, and abandoned the addition of a MENA category on the Census," reads the Biden-Harris partnership plan.

Khalaf is cautiously optimistic that the Biden-Harris administration could be open to adopting a correct categorization for the community. But he emphasized that this should have never been a partisan issue.

"With the Biden administration, at least now we have a cabinet that will listen, said Khalaf. "Whether or not they act upon it is a different story."