The week in good news: A record-breaking baby, a giant sloth and new Dr. Seuss 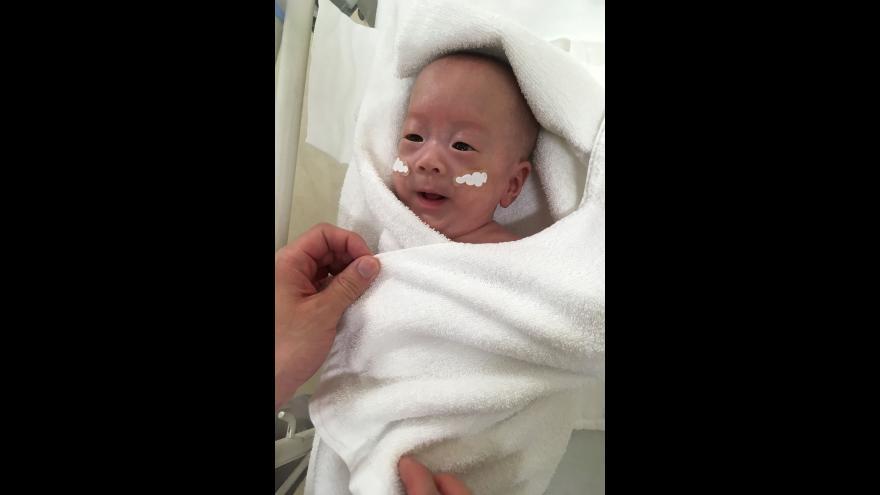 After staying in the neonatal ICU for five months, the baby's weight increased to 7.1 pounds. He is now healthy and was discharged.

(CNN) -- Few things are more comforting than a steaming, perfectly brewed cup of tea (or coffee or cocoa, for those of you that think tea tastes like hot moldy leaf water). Did you know that green tea and black tea are made from the same plant, the Camellia sinensis? Pour yourself a little of whatever beverage you prefer, and let this week's crop of good news soothe your soul.

Our favorites this week

The author responsible for making your childhood wonderfully weird is giving us a gift from beyond the grave. Yes, a new Dr. Seuss book is being released, and it's called "Dr. Seuss's Horse Museum." Because of course it is! We expect nothing less from the guy who convinced us green eggs and ham was a real thing. The manuscript for "Horse Museum" was found a few years ago in the late writer's house, and the book will hit shelves for the first time this September. Even better, the new book will feature cameos of some old favorites, like the Cat in the Hat, the Grinch and Horton the Elephant. So it will be like "Avengers: Infinity War," only for children. And hopefully with a much happier ending.

The tiniest baby boy in the world is finally going home! The little fighter weighed only 9.45 ounces when he was born last August in Tokyo. That's only slightly heavier than a grapefruit. He was so itty-bitty he could fit in the cupped palms of an adult's hand. Sadly, babies born that small and that premature face very long odds. Since 1936, only 23 babies worldwide have survived preterm birth after weighing less than 10.58 ounces. With some luck and the help of a dedicated medical team, this little one continued to grow and thrive and has now been discharged from the hospital weighing a happy, healthy 7.1 pounds.

Here's a good question for your next trivia night: What is the most visited national park in the United States? It's the Great Smoky Mountains National Park in North Carolina and Tennesssee, and it's about to get its first female chief ranger. Lisa Hendy is scheduled to start her tenure in April, and is currently the chief ranger at Big Bend National Park in Texas. Oh, you're not envious yet? She's also worked at Yellowstone, the Grand Canyon and several other scenic American gems. Add "chief ranger" to your list of dream jobs. (Oh, and also, March is Women's History Month. What better way to celebrate than to be like Hendy and make a little history yourself?)

You gotta see this

Go ahead, guess what this is. Art? One of those frilly fancy lattes people like to take pictures of but never drink? An unnecessarily extreme closeup of a bowling ball? Nope, it's a new photograph of Jupiter's Great Red Spot. Granted, it's a very high-def, lovingly colored depiction of Great Red, but it perfectly captures the gas giant's dramatic, swirly beauty.

A random fender bender in South Lake Tahoe turned out to be a literal lifesaver for a 48-year-old woman trapped in her car. An unidentified snowplow driver was clearing roads when he struck a parked car that was almost completely encased in snow. As he and some police officers began digging the car out, a woman stuck her hand out from the car window waving for help. It took a few hours, but the driver and the officers were able to free her from the snow-covered car. Now she's safe, and the anonymous heroes can stay warm knowing they helped save a life.

Honestly, I gasped out loud when I saw this photo. The glowing ice curtains in the Mimishui Scenic Area in Pingshan County, China, are the perfect backing to the frame of pink buds and the whole thing just looks like a fairytale. A bonus for budding botanists: The area also plays host to more than 500 different kinds of plants.

It confirmed my belief that we might fly in private planes or drive fancy cars, but at the end of the day it's the simple things that give happiness in life.

- Italian football legend Gianluigi Buffon, talking about one of his favorite paintings, Chagall's "The Promenade." Oh, you didn't think you were going to spend part of today reading about a famous football player waxing poetic about artistic masterpieces and their depiction of life's true joys? Too late! This entire profile of him is filled with wholesome art thoughts, and you will not regret reading every word of it.

Thousands of years ago, giant sloths roamed the earth -- seriously. The giant ground sloth could be more than 13 feet tall and made its home in Central America. The tooth of one of these beasts was recently uncovered, and it was nearly four inches long!

Tell us something good

Need another reason to support your local businesses? They support each other! Seth Marko and his wife, Jennifer Powell, own The Book Catapult, a bookstore in San Diego. When Powell had to have emergency heart surgery and their only employee fell ill, they were fresh out of hands to run the store. A fellow bookseller friend got wind of their situation and rallied employees and owners from several other bookstores to make sure Powell's shop stayed open while he recovered.

Kids fighting cancer deserve all of the love and support in the world, and sometimes that love and support comes in the form of cute dog photos. Seven-year-old Emma Mertens has DIPG, or Diffuse Intrinsic Pontine Glioma, a rare form of brain cancer. To cheer her up, her family and friends asked people to send them universal "feel better" fodder: Photos of their cute dogs. Now Emma's parents say they get letters from around the world, not to mention donations and the occasional pic of a cute horse or pig. It's a huge pick-me-up for Emma, but her parents say they also appreciate the awareness it has raised for her disease.

What happens when you bring a potato to life, give it some fur and teach it to love? A wombat. That's what happens.