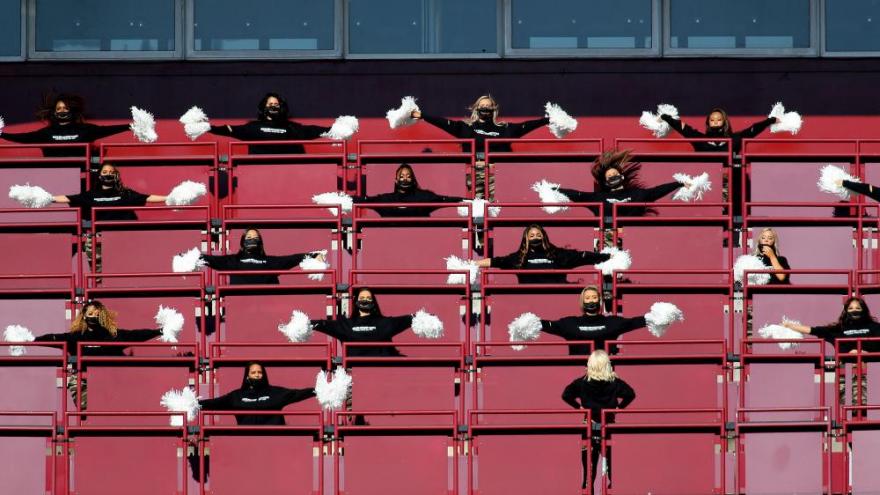 Starting next season, Washington Football Team fans will no longer see a traditional NFL cheerleading squad on the field, instead, they will be entertained by a coed dance group.

(CNN) -- Starting next season, Washington Football Team (WFT) fans will no longer see a traditional NFL cheerleading squad on the field, instead, they will be entertained by a coed dance group.

The franchise is removing its cheerleaders from the field after 50 years as part of its rebranding effort, which include dropping Redskins, and a re-imagined approach to fan engagement and game day experience, according to a news release.

The team has hired, Petra Pope, who has a background in NBA entertainment, to be the new senior adviser for the team's game day experience. Pope told ESPN that the WFT wants to create a "more modern franchise" focused on diversity and inclusion.

"The NBA has long embraced innovative dance and halftime shows, but most NFL teams have remained more oriented towards traditional cheerleading programs," Pope said in a statement.

"Fans can expect an experience like none other -- a gender-neutral and diverse squad of athletes and dancers whose choreography, costumes, props, tricks and stunts will rival the best entertainment across genres and really inspire and 'wow' our fans."

The team's president, Jason Wright, who was named the first Black president in the NFL last year, said in a statement that the team's aim is to create entertainment similar to what fans find at an NBA game.

"As we set out to modernize the Washington Football gameday, it's important that we develop a top-notch entertainment program that keeps our fanbase excited and connected to the game and the team," Wright said.

"We believe Petra is the ideal person to lead this charge and bring her extraordinary background to the gridiron."

The new coed team will have 36 or more members and former cheerleaders are welcome to tryout, according to Pope.

"Change can be extremely difficult," Pope said. "I appreciate the passion that the ladies have and can relate to that passion because I've been a mentor for thousands of dancers over my career. As we progress to a reimagined era, the choreography will be much more athletic."