The vote to oust Liz Cheney took only 16 minutes. Here's what happened. 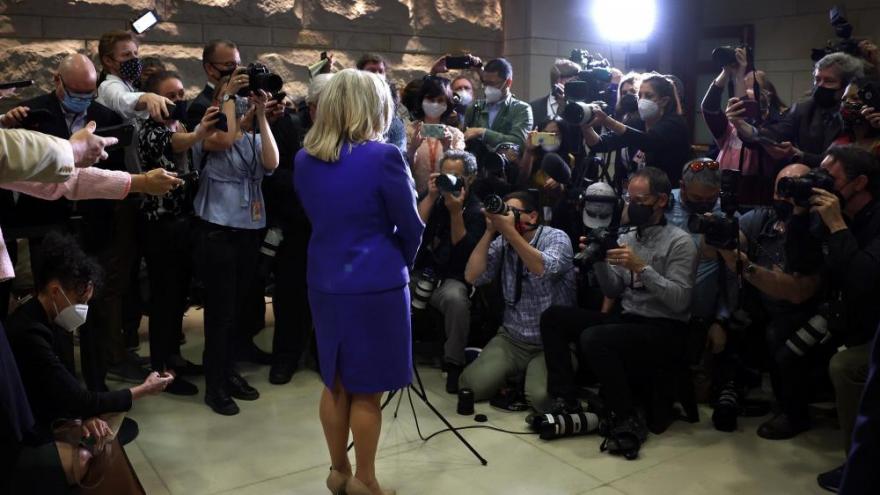 The vote to oust Rep. Liz Cheney from her leadership position took only 16 minutes.

(CNN) -- The vote to oust Rep. Liz Cheney from her leadership position took only 16 minutes.

Before the House Republican Conference met Wednesday morning to oust the Wyoming congresswoman from her position as the third-ranking Republican member in Congress, sources told CNN they expected it to be quick.

But it happened so quickly that some members arrived just in time for the vote. It stood in contrast to the more than four-hour meeting and vote that took place on February 4 that kept Cheney in leadership at the time, following her vote to impeach former President Donald Trump for his role in inciting the January 6 insurrection at the Capitol.

The meeting began with Cheney giving remarks to her colleagues, where she once again called out Trump for his "Big Lie" that the 2020 election was stolen and other Republicans who aided his efforts to overturn his loss, charging that she would lead "the fight to restore our party and our nation to conservative principles."

"We cannot let the former President drag us backward and make us complicit in his efforts to unravel our democracy," Cheney said in her remarks before being ousted. "Down that path lies our destruction, and potentially the destruction of our country."

Sources told CNN that when she criticized Trump, she was booed by some of her colleagues.

She concluded her remarks with a prayer, which earned her a standing ovation, according to Rep. Ken Buck, a conservative Colorado Republican.

Then, Rep. Virginia Foxx of North Carolina made the motion to recall Cheney, thus formally beginning the process of removing her as conference chair.

House Minority Leader Kevin McCarthy spoke briefly and a voice vote was called. Because it was a voice vote, there is no tally of those who supported or opposed Cheney.

A source in the room told CNN that McCarthy made the same points he wrote in his letter released on Monday before the vote.

Another source told CNN that five lawmakers stood to request a recorded vote to remove Cheney from the leadership -- but that did not happen and the gavel came down.

Cheney told colleagues it was up to McCarthy, a California Republican, whether he wanted a voice vote or not "and Kevin asked for voice," the source said.

After her ouster, Cheney walked out of the meeting and addressed reporters, saying she plans to lead the fight to move the Republican Party closer to the fundamental principles of conservatism.