The US races to supply more at-home rapid Covid tests 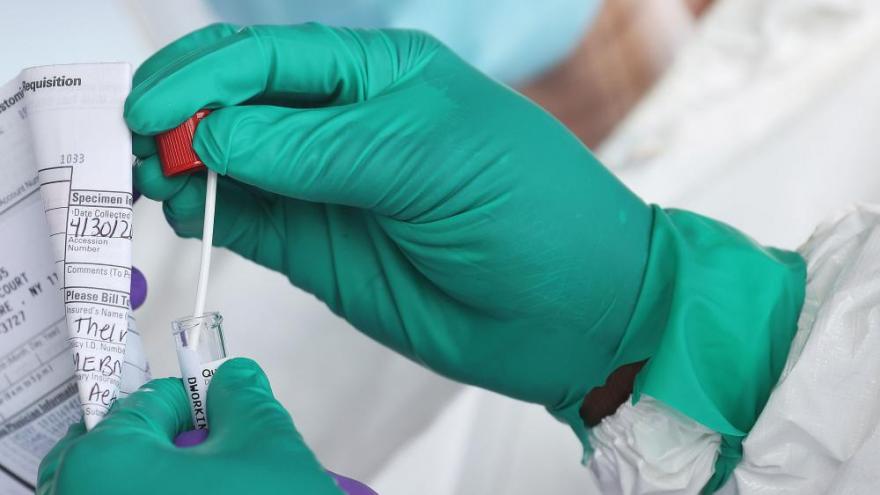 (CNN) -- The United States is pushing to end a scarcity of rapid, at-home Covid-19 tests, with new investments from the Biden administration intended to bring more of the devices into American households.

The National Institutes of Health's $70 million pledge, announced last week, promises to get more tests onto the market by identifying and encouraging new manufacturers and easing the obstacles in getting the tests approved. It follows a $1 billion push unveiled by the White House last month, and Biden has committed to procuring an extra 180 million rapid testing devices over the next year.

The Food and Drug Administration (FDA) last month approved tests by US company Flowflex, saying the decision "should significantly increase the availability" of instant tests.

But the moves mark something of an 11th hour scramble for instant, or antigen, tests -- and the US is lagging dramatically behind many countries, where rapid coronavirus tests have been cheap and plentiful for months.

In the UK, for instance, at-home testing has become part of a weekly routine for millions; a pack of several tests can be ordered for free online once a day, offering results in as little as 15 minutes and allowing Brits to check their Covid-19 status before heading to work, school, social events or large gatherings.

Other countries have embraced the technology too. Since March, every German citizen has been entitled to one free antigen test a week. Cheap rapid tests are offered to anyone in Italian pharmacies. In France, they cost only around 6 euros ($7) and are readily available to buy. And in Spain, the tests have been available for purchase since July at around the same price. Even despite those affordable rates, Madrid pharmacies say supply is outpacing demand, likely due in part to the country's high vaccination rates.

Yet more nations are just now starting to roll out the option; on Monday, rapid at-home tests finally hit the shelves of Australia's pharmacies and supermarkets, after being approved for use in the country.

It's been a different story in the United States though, where those wanting the peace of mind offered by a home test kit are usually met with empty pharmacy shelves or high prices.

The shortfall traces back in part to the early months of the pandemic, when the US was slow to prioritize testing for Covid-19. Last month, former US Centers for Disease Control and Prevention Director Dr. Robert Redfield, who led the agency under former President Donald Trump, admitted the US "was always behind" on testing through much of 2020.

The government could have done more during that period to stimulate the private sector in developing testing, and he was "disappointed" it did not do so, Redfield told SiriusXM's Doctor Radio.

But there has also been hesitancy over just how effective rapid tests are.

A vast, international review of studies published in March found that few antigen tests met the World Health Organization's minimum acceptable performance standards. And in October, Covid-19 home test-maker Ellume announced a voluntary recall of some of its rapid antigen tests in the US, due to an increased chance of false positives.

A study in March by University College London found accuracy rates of around 80% in antigen tests used in the UK -- higher than the international review, but below the levels provided by a PCR test.

Nonetheless, the US is hoping to join the band of nations where at-home testing is routine. If availability is ramped up, Americans could soon have another tool at their disposal when it comes to Covid-19.

YOU ASKED, WE ANSWERED

Q: What happens if I test positive while on vacation?

A: The holiday season is quickly approaching, and relaxed rules on domestic and international travel mean that many people will be planning trips in the coming weeks.

But the threat of Covid-19 has not gone away. Taking a test is still a good idea if you're spending time with vulnerable relatives, and if you're flying internationally, it's possible that you'll need to test negative to enter or leave your destination.

That can lead to a headache when holidaymakers get a positive result while on vacation -- a predicament many have already found themselves in.

You'll likely have to arrange plans to isolate, but rules vary from country to country so it's important to check before you travel. For instance, visitors to Italy are required to pay their own quarantine fees up-front if they test positive after they arrive.

"Travel insurance with Covid-19 quarantine coverage is designed to help cover the lodging and accommodation expenses you might incur should you test positive for Covid on vacation," Narendra Khatri, president and CEO of Insubuy, which provides international travel medical insurance from various US-based companies, told CNN.

"The benefit amount depends entirely on the policy you choose. Most plans provide a minimum of $2,000 in quarantine, lodging, and accommodation expenses, and trip interruption up to 100% of the trip's cost."

Send your questions here. Are you a health care worker fighting Covid-19? Message us on WhatsApp about the challenges you're facing: +1 347-322-0415.

READS OF THE WEEK

Why are we still arguing about face masks?

At the start of the pandemic, much of the Western world followed a similar playbook for tackling Covid-19. But those days are behind us. Pandemic management now differs widely from country to country, with the face mask being one example of the world's increasingly fractured approach to Covid-19, Rob Picheta writes.

Debates still rage in multiple countries over their use, and some regions have recently removed mandates that people wear them in crowded spaces. "Masks remain a symbol of a divided society -- between those who feel we have restricted too much and those who feel we have not intervened enough during the pandemic," Simon Williams, a senior lecturer on Covid-19 behaviors at Swansea University in Wales, told CNN.

With the prospect of another winter surge brewing, some countries are grappling with calls to return to mask use. But they face resistance from people fatigued by endless mixed messaging -- and many experts fear that in countries where rules have been relaxed, reimposing mandates could be complicated.

As Covid-19 wreaked havoc around the world last year, the 39-year-old son of an Indian billionaire was laying the groundwork for a plan he hoped would eventually end the pandemic.

Adar Poonawalla -- the CEO of Serum Institute of India (SII), the world's largest vaccine maker -- pumped hundreds of millions of dollars into his Indian manufacturing facility and committed to making millions of doses of a then-unproven coronavirus vaccine.

That vaccine, created by Oxford University and AstraZeneca, was still in clinical trials at the time. Nobody was sure how long a vaccine would take to develop, let alone whether it would even work. "It was a calculated risk," Poonawalla told CNN Business. The AstraZeneca vaccine received approval from UK regulators in December 2020, and Poonawalla became a household name in India.

But soon it became evident how badly Poonawalla had miscalculated the challenges that come with distributing millions of vaccines in the middle of a once-in-a-century pandemic.

His company's ability to inoculate even his own countrymen was thrown into doubt earlier this year as a devastating wave of coronavirus hit India. He's also failed to keep up with his commitment to deliver shots to other nations -- the consequences of which have dented his reputation and shed light on the perils of such heavy reliance on one manufacturer.

From Australia to South Korea and across Asia Pacific, the final bastions of "zero-Covid" are easing restrictions and opening borders as the region prepares to live with the virus -- except for one major holdout.

China, the country where Covid-19 was first detected nearly two years ago, remains determined to eliminate the virus inside its borders, with officials there showing no signs of backing down, Ben Westcott writes.

Despite fully vaccinating more than 75% of its population, China is sticking to its stringent zero-Covid strategy, including closed borders, lengthy quarantine measures for all international arrivals and local lockdowns when an outbreak occurs. On Tuesday, the northwestern city of Lanzhou, with a population of more than 4 million people, went into lockdown after just six new daily Covid-19 cases were reported there. To date, Lanzhou has recorded 68 cases linked to the newest outbreak.

In China's Asia Pacific neighbors, however, things couldn't be more different: curfews are being lifted in South Korea and Japan, Thailand has started welcoming more international travellers, and Australia is re-opening its borders to fully vaccinated citizens who have been unable to return home for nearly two years.

The case for booster shots just got stronger

A new study from Israel has strengthened the case for Covid-19 booster jabs, which are currently being rolled out for older and at-risk groups in the US and several other countries.

Researchers looked at data for more than 1.4 million people in Israel, splitting them into two camps -- those who had received a third dose of a Covid-19 vaccine, and those who hadn't.

The results were clear: Compared to those who did not receive a third shot, the booster decreased the rate of hospitalization, severe disease and death from Covid-19 by about 80% to over 90%, no matter the person's gender, number of other underlying medical conditions, or age if over 40 years.