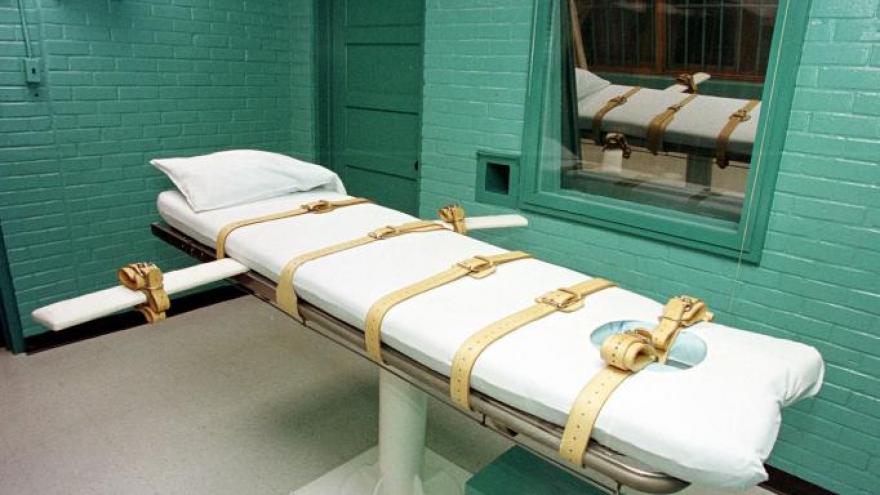 The United States plans to execute the only Native American on federal death, ignoring the Navajo Nation's longstanding opposition to capital punishment and undermining the federal government's commitment to recognizing the sovereignty of Native tribes.

(CNN) -- The United States plans to execute the only Native American on federal death row next week, ignoring the Navajo Nation's longstanding opposition to capital punishment and undermining the federal government's commitment to recognizing the sovereignty of Native tribes.

Lezmond Mitchell, 38, was convicted more than 17 years ago for the 2001 murders of a Navajo woman and her 9-year-old granddaughter on the Navajo reservation in the northeast corner of Arizona.

Despite the crimes, the Navajo Nation and members of the victims' family have repeatedly said they are opposed to the death penalty in Mitchell's case, because it would violate their cultural and religious beliefs.

"The Navajo Nation and the family of the victims have not changed their position," Navajo Nation President Jonathan Nez and Vice President Myron Lizer wrote in a letter to President Donald Trump late last month. "And we strongly hold to our cultural, traditional, and religious beliefs that life is sacred."

Mitchell's case is further complicated by federal law, which gives Native American tribes the authority to opt into the federal death penalty. The Navajo Nation, like many tribes, has not. But in pursuing the death penalty for Mitchell, the US Department of Justice relied on a legal technicality that a federal judge once called a "loophole" to circumvent the tribe's authority.

The Justice Department declined to comment for this story.

Mitchell was one of five inmates first scheduled to be executed last year when the DOJ reinstated capital punishment after a 16-year hiatus. After a series of legal challenges, three people have been executed so far.

Mitchell was granted a stay of execution last October so the Ninth Circuit Court of Appeals could hear his latest appeal, which challenged a lower court's decision to deny him the chance to interview jurors in his case to investigate whether racial bias might have played a role in their decision. The court rejected the appeal in April.

Mitchell's attorneys appealed to the Supreme Court, requesting a stay of execution in the meantime. Additionally, his attorneys, with the help of the Navajo Nation, filed a petition for clemency late last month asking President Trump to commute Mitchell's sentence to life in prison.

If their efforts fail, Mitchell's attorneys say he would be the first Native American in modern history to be executed by the US government for a crime committed against another Native American on tribal land, despite the tribe's objections.

"The federal government's announcement that it now plans to execute Lezmond Mitchell demonstrates the ultimate disrespect for the Navajo Nation's values and sovereignty," Mitchell's attorneys said in a statement.

Mitchell was convicted in 2003 of the murders of 63-year-old Alyce Slim and her granddaughter, Tiffany Lee.

Prosecutors accused Mitchell, then 20, and a 16-year-old co-defendant of murdering Slim and Lee in October 2001 so that they could steal Slim's pickup truck to use it in an armed robbery. Mitchell was found guilty on multiple charges, including first-degree murder, felony murder and carjacking resulting in a death.

At the time of the trial, the victims' daughter and mother, Marlene Slim, said she opposed the death penalty, and she asked prosecutors to pursue a sentence of life without parole, according to court documents.

Similarly, then-Attorney General of the Navajo Nation Levon B. Henry wrote a letter to the prosecuting US Attorney's Office of Arizona. He explained that the tribe was opposed to the death penalty because their "culture and religion teaches us to value life and instruct against the taking of human life for vengeance."

Under the Major Crimes Act, the US government can prosecute certain crimes, including murder, committed by Native Americans in so-called Indian country.

However, a provision in the Federal Death Penalty Act gives tribes the ability to opt into the federal death penalty -- an authority often called the "tribal option." Like many other Native American tribes, the Navajo Nation has not opted into the death penalty.

The tribal option stopped federal prosecutors from pursuing the death penalty against Mitchell. But they built a capital punishment case on the charge of carjacking resulting in a death, court documents show -- a charge not covered under the Major Crimes Act and not bound by the tribal option.

Several judges who have reviewed Mitchell's case have raised questions about the DOJ's insistence of having the Navajo man sentenced to death.

In a partial dissent to the Ninth Circuit's 2015 decision to affirm Mitchell's conviction, the late Judge Stephen Reinhardt called the government's decision to pursue the death penalty on the basis of carjacking a "loophole to circumvent" the tribe's authority.

Executing Mitchell "over the express objections of the Navajo Nation and the victims' family reflects a lack of sensitivity to the tribe's values and autonomy and demonstrates a lack of respect for its status as a sovereign entity," he wrote.

Reinhardt's view was reiterated in April, when the Ninth Circuit Court rejected Mitchell's latest appeal, which challenged a district court's previous decision to deny him the chance to interview his jurors to investigate whether racial bias played a role in their decision.

"The imposition of the death penalty in this case is a betrayal of a promise made to the Navajo Nation, and it demonstrates a deep disrespect for tribal sovereignty," Judge Morgan Christen wrote in her concurring opinion.

In a second concurring opinion, Circuit Judge Andrew Hurwitz urged the Trump administration to "take a fresh look at the wisdom of imposing the death penalty," saying that "a proper respect for tribal sovereignty requires that the federal government not only pause before seeking that sanction, but pause again before imposing it."

Mitchell's clemency petition lists a number of other grievances with the way his case was handled from the beginning.

His attorneys say federal investigators kept the 20-year-old in a Navajo jail for 25 days without access to an attorney, during which time he was interrogated by the FBI. They also find issue with the fact that Mitchell's trial was held in Phoenix, more than 200 miles from the Navajo reservation, potentially excluding Mitchell's fellow tribe members from his jury.

"As a result, Lezmond was convicted by a jury of 11 white persons and only one Navajo," the petition says.

The petition describes Mitchell's "traumatic and abusive upbringing," which resulted in PTSD, and his abuse of drugs and alcohol beginning in his early adolescence.

The petition also asks President Trump to consider the fact that Mitchell's then-16-year-old co-defendant received a life sentence because he was a juvenile at the time, even though, the petition says, he was the "primary aggressor" in the Slim murders and had recently committed another double homicide months prior.

But Mitchell's advocates have largely pointed to the threat his execution poses to tribal sovereignty, not just for the Navajo Nation but for all Native American tribes.

"If this execution goes forward, the precedent will be set that, no matter the sovereign position of any Indian tribe, the federal government can kill American Indians," Navajo Council Delegate Carl Roessel Slater said in a statement. "While this is a justice issue, this precedent will only add another chink in the nation's sovereign armor."

A broad coalition of Native tribes joined the Navajo Nation this week to ask President Trump to grant Mitchell clemency. They include the leaders of thirteen tribes and the National Congress of American Indians, which also cited the "dangerous precedent" that Mitchell's execution could set for tribal sovereignty.

"Consistent with the position of the Navajo Nation, and with your Administration's stated position of respect for tribal self-determination, we urge you to commute Mr. Mitchell's death sentence," they said in a letter to President Trump.