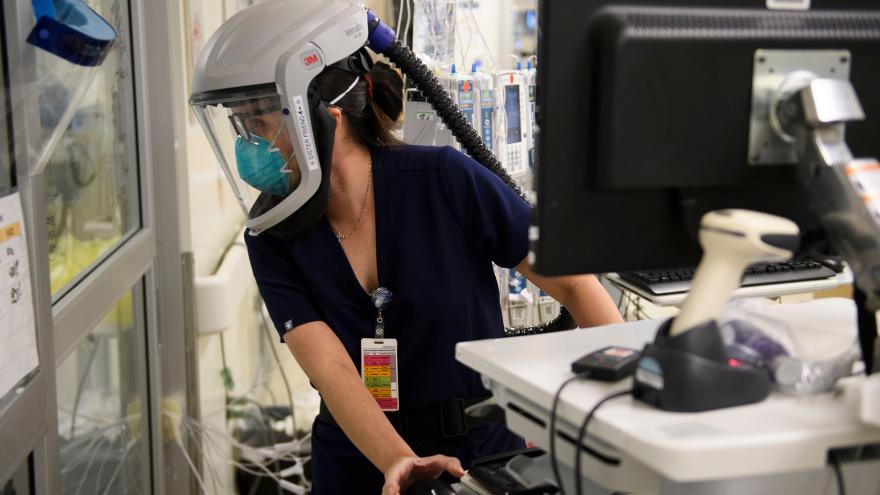 The US reported its highest number of Covid-19 deaths in one day Tuesday: 4,327, according to Johns Hopkins University.

In fact, the five highest daily tallies for new infections and new deaths have all occurred in 2021.

Over the past week, the US has averaged more than 3,300 deaths every day, a jump of more than 217% from mid-November.

More than 131,300 people are now hospitalized with Covid-19, according to the COVID Tracking Project.

In some parts of the country, hospitals have reached their breaking point.

Louisiana Gov. John Bel Edwards extended an order that keeps mitigation measures in place for nearly another month, saying the state was seeing a "huge spike" in cases and hospitalizations.

As students return for the first semester of 2021, many college towns are seeing a new onslaught of Covid-19.

More than a quarter of the population in 30 US counties comes from full-time enrollment at higher education institutes, according to the National Center for Education Statistics.

And in 26 of the counties, Covid-19 cases increased by an average of 50% over the past week.

Why June could be 'dramatically better'

While vaccinations continue to lag behind predictions, health experts are begging Americans to hunker down in their bubbles for these next few months as soaring hospitalizations lead to record daily deaths.

While those "awful" numbers will likely continue this winter, better months are coming, said Dr. Paul Offit, a member of the US Food and Drug Administration's Vaccines and Related Biological Products Advisory Committee.

Mass vaccinations, warmer weather, a new presidential administration and a population building immunity could lead to a "dramatically better" summer, he said.

Two "remarkably effective" vaccines are already being administered, and two more vaccines -- from Johnson & Johnson and AstraZeneca -- "are right around the corner," Offit said.

The incoming Biden administration "isn't into this cult of denialism" that has surrounded the Trump administration's coronavirus response, and it would "take this problem head on," Offit said.

If another 55% to 60% of the population can be vaccinated -- something Offit said can be done if the US gives 1 million to 1.5 million doses a day -- "then I really do think that by June, we can stop the spread of this virus."

On Tuesday, Health and Human Services Secretary Alex Azar said the federal government will no longer hold back second doses of Covid-19 vaccines that it kept in reserve.

"We are telling states they should open vaccinations to all people ... 65 and over and all people under age 65 with a comorbidity with some form of medical documentation," Azar said.

Second doses will still be available to those who need them, he said, noting that "based on the science and evidence we have, it is imperative that people receive their second doses on time."

More than 27.6 million vaccine doses have so far been distributed, according to CDC data, and more than 9.3 million people have received their first dose -- a far cry from where some experts hoped the country would be by now.

In many cases, it's been the rigid following of guidance on who should get the vaccines first that has slowed the vaccine rollout, Dr. Anthony Fauci said Tuesday.

While priorities recommended by the CDC shouldn't be abandoned, Fauci said, "When people are ready to get vaccinated, we're going to move right on to the next level, so that there are not vaccine doses that are sitting in a freezer or refrigerator where they could be getting into people's arm."

And starting in two weeks, vaccines will be distributed to states based on which jurisdictions are getting the most doses into arms and where the most older adults reside.

"We will be allocating them based on the pace of administration as reported by states and by the size of the 65 and over population in each state," Azar said.

"We're giving states two weeks' notice of this shift to give them the time necessary to plan and to improve their reporting if they think their data is faulty."

Only six states have administered more than 50% of the doses distributed to them, according to data from the Centers for Disease Control and Prevention: Connecticut, Montana, North Dakota, South Dakota, Tennessee and West Virginia.

On the opposite end, seven states have administered less than 25% of the doses they were given: Alabama, Arkansas, California, Georgia, Hawaii, Idaho and Virginia.

Nearly 2.3 million children tested positive for Covid-19 from the pandemic's start through January 7, a new report from the American Academy of Pediatrics and the Children's Hospital Association shows.

More than 171,000 of those cases were reported between December 31 and January 7, while over two weeks -- between December 24 through January 7 -- there was a 15% increase in child Covid-19 cases, the report said.

The findings mean children now represent 12.5% of all infections in the US.

"At this time, it appears that severe illness due to Covid-19 is rare among children," the report said.

"However, there is an urgent need to collect more data on longer-term impacts of the pandemic on children, including ways the virus may harm the long-term physical health of infected children, as well as its emotional and mental health effects."

Correction: A previous version of this story misspelled the last name of a member of the US Food and Drug Administration's Vaccines and Related Biological Products Advisory Committee. His name is Dr. Paul Offit.