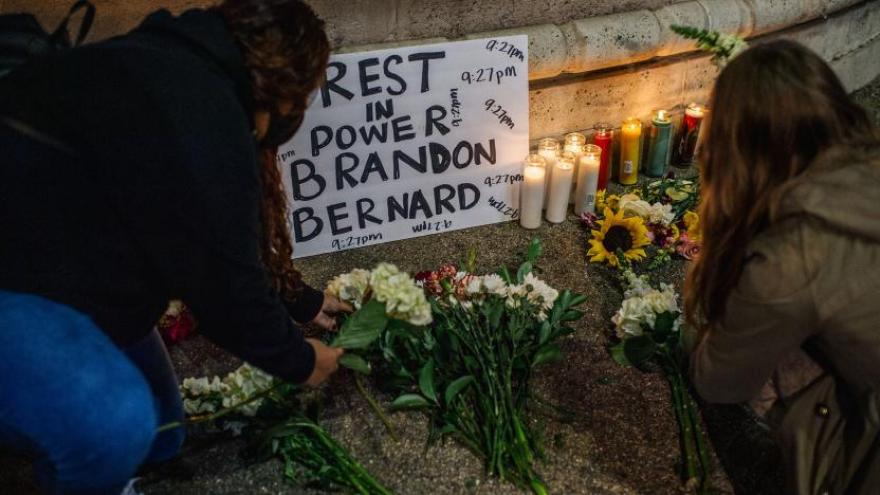 Women lay flowers at a candlelight vigil for Brandon Bernard on December 13 in Los Angeles. Bernard, 40, was the youngest person to be executed in the US in nearly 70 years, and was put to death for a crime committed when he was a teenager.

(CNN) -- For the first time in US history, the government has executed more people than all of the 50 states, and the number of federal prisoners put to death this year -- 10 -- is the highest since President Grover Cleveland's second term in office, according to the Death Penalty Information Center.

The group's report, published Wednesday, said seven state-level executions have been carried out in 2020, a 37-year low.

There were also fewer new death sentences imposed this year -- 18 -- than in any other year "since the Supreme Court struck down all existing capital punishments statutes in the U.S. in 1972," the report said.

Before this year, according to the group's database, there had been no federal executions in the United States since 2003, and only three federal inmates had been executed since the federal death penalty was reinstated in 1988.

"No president in the 20th or 21st century before this year presided over double-digit executions in any calendar year. The Trump administration has carried out ten in the space of five months," Robert Dunham, executive director of the Death Penalty Information Center and the report's lead author, told CNN.

"You'd have to go back to 1896 and President Grover Cleveland's second presidency to find this many federal civilian executions in a single year," Dunham added.

In addition, no administration since Cleveland's first presidency has carried out multiple executions during a transition. At the time, the transition period lasted from November to March, compared to two and a half months now, Dunham explained.

"Traditionally, out of respect for the incoming administration, and because executions are a matter of life and death, executions weren't carried out during a transition period," Dunham said.

The report noted there were several anomalies with the US government's actions this year.

"By the end of 2020, the federal government had conducted more civilian executions in five months than any other presidency in the 20th or 21st centuries, performed the first executions by a lame-duck president in more than a century, and scheduled more executions than had ever occurred in a presidential transition period in the history of the United States," the report said.

Three more federal executions are scheduled to be carried out before President-Elect Joe Biden's inauguration on January 20.

Racial disparities in this year's executions were similar to previous trends, the report said, "with almost half of the defendants executed being people of color and 76% of the executions for the deaths of white victims."

"Racism has always infected the use of the death penalty and this year is no exception. The death penalty -- as the most severe punishment -- must be part of the efforts to address racism in the criminal legal system as a whole," said Ngozi Ndulue, DPIC's Senior Director of Research and Special Projects and the lead author of "Enduring Injustice: the Persistence of Racial Discrimination in the U.S. Death Penalty," which DPIC released in September.

The return to federal executions

The Trump administration's decision to resume federal executions after a 16-year hiatus was announced in July 2019 by now outgoing Attorney General William Barr.

Barr at the time said the government was moving to seek justice against the "worst criminals" and bring relief to victims and family members.

According to the Justice Department's statement, Barr directed the Federal Bureau of Prisons to adopt an execution protocol using a single-drug injection of pentobarbital, replacing a three-drug procedure observed in the past.

According to Dunham, the administration's rushed approach to resuming federal executions, particularly with respect to the execution protocol, was to the detriment of public and judicial oversight.

"Everybody else knew that it was more important to protect the public health than it was to kill prisoners now, who could be executed when it was safe to do so later. Only the federal government moved forward with those executions."

And in doing so, the report said, the government's actions "contributed to an outbreak (of coronavirus) in the Federal Correctional Complex in Terre Haute, infected at least nine members of federal execution teams, and to several lawyers and at least one religious advisor contracting COVID-19."

The Death Penalty Information Center, Dunham explained, doesn't have a stance on whether the death penalty should or shouldn't exist.

The first federal execution of 2020 was that of Daniel Lewis Lee, a White man convicted of murdering a family of three, including an 8-year-old girl. The execution took place on July 14 in Indiana after the Supreme Court overrode a lower court order temporarily blocking it.

Most recently, two Black men, Brandon Bernard and Alfred Bourgeois, were executed on December 10 and 11, respectively.

Bernard, 40, was the youngest person to be executed in the United States in nearly 70 years, according to ?DPIC, and was put to death for a crime committed when he was 18. His case drew the attention of celebrities and politicians, including Kim Kardashian West who called on President Donald Trump to commute his sentence, and the Rev. Jesse Jackson.

Federal executions, though they may get more attention ?this year, are a fraction of the larger picture, according to Dunham.

"In the United States, there are only 52 people currently on federal death row. There are more than 2,500 people on (state) death row nationwide."

Alabama, Georgia, Missouri and Tennessee each carried out one execution in 2020, while Texas executed three prisoners.

The number of state-level executions in 2020 appears to have been influenced by the closing of courts due to the coronavirus pandemic, but it's in line with long-term trends showing a nationwide move away from the death penalty, Dunham said.

A 2020 Gallup poll cited in the report shows the highest level of opposition to the death penalty among Americans since 1966, with 43% against it and 55% in favor of it.

The data shows a changing view compared with the 1990s, when support for the death penalty was as high as 80%, and executions reached an all-time high in 1999 with 98 inmates put to death.

In March, Colorado became the latest state to abolish the death penalty, bringing the number of states that have done so to 22. Washington, DC has also abolished the death penalty. There are 12 states where there have been no executions in the past 10 years -- including Louisiana and Utah, which reached that milestone this year, the report said.

2020 was also the year of a national reckoning with racial injustice across the board and within the criminal justice system.

According to the report, candidates pledging systemic reforms have won prosecutor races in counties across the country that produced a historically disproportionate number of death sentences or executions, such as Los Angeles County in California and Travis County in Texas, among others.

"Nearly 25% of the population of death row is now in counties where prosecutors say they won't use the death penalty or are going to significantly restrict its use. All of that suggests the numbers will stay low in most of the country going forward," Dunham told CNN.

The incoming Biden-Harris administration campaigned on a criminal justice plan that would seek to eliminate the death penalty at the federal level and offer incentives to states to do the same.

On Tuesday, more than 40 members of Congress and representatives-elect called on Biden to abolish the federal death penalty on his first day in office.

"With a stroke of your pen, you can stop all federal executions, prohibit United States Attorneys from seeking the death penalty, dismantle death row at FCC Terre Haute, and call for the resentencing of people who are currently sentenced to death," reads the letter, written by Democratic Rep. Ayanna Pressley of Massachusetts.