The US economy created 4.8 million jobs in June 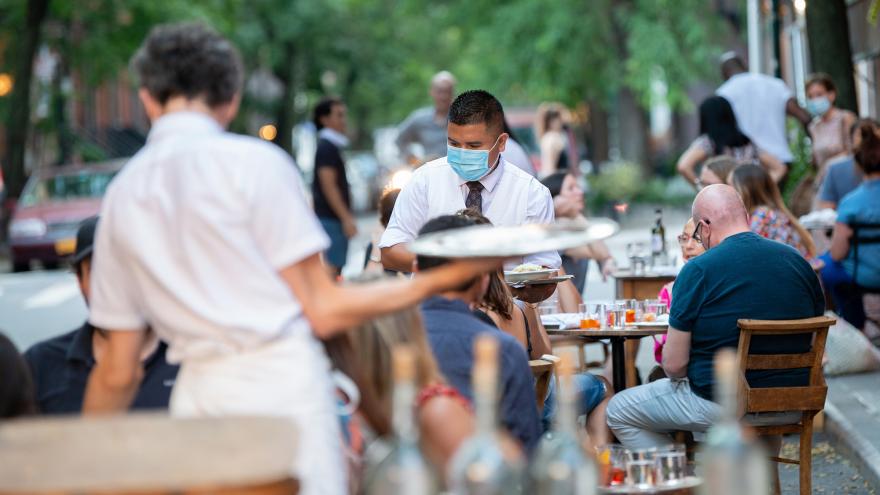 (CNN) -- The US unemployment rate fell to 11.1% as the economy added a record 4.8 million jobs in June, the Bureau of Labor Statistics reported on Thursday.

The data was far better than economists predicted, and the unemployment rate also fell more than expected. It was the second-consecutive month of growth after more than 20 million jobs were wiped out in April during the coronavirus lockdown. The reopening of the economy is easing the burden on America's stressed labor market.

But after two months of rampant growth, the American economy is still down nearly 14.7 million jobs since February. Although the unemployment rate has come down from 14.7% in April, it remains higher than at any point during the Great Recession.

A full job market recovery is far from certain as long as the US economy remains in its current, deep recession. America is dealing with a severe joblessness crisis and millions of people are relying on government aid to make ends meet.

The Department of Labor also reported Thursday that 1.4 million workers -- more than expected -- filed for first-time unemployment benefits last week. The number of Americans filing for unemployment at least two weeks in a row rose slightly to 19.3 million.

For the fourth month in a row, the Labor Department noted that its data collectors misclassified some workers as "employed not at work," when they should have been classified as "unemployed on temporary layoff." If it weren't for that issue, the unemployment rate would have been as high as 12.3% in June.

The pandemic recession arrived abruptly, but the recovery won't be as fast.

America's hospitality and leisure industries were hit the worst by the pandemic lockdown. As the economy reopens, the restaurants and bars are coming back: they added 1.5 million jobs in June, accounting for 30% of all US job gains last month. After two months of job gains, however, that sector is still down 3.1 million jobs since February, BLS Commissioner William Beach noted in a statement.

Americans are facing more uncertainty over the months to come even as the economy is reopening. At the top of the list of worries is a resurgence of Covid-19 infections. Parts of the country are already dealing with that, and some states have delayed or paused their reopening plans accordingly. That means it could take even longer for jobs to resurface after the lockdown.

Expanded unemployment benefits have helped people to make ends meet. The US CARES act bolstered benefits by $600 per week and allowed workers who usually aren't eligible to claim aid, such as the self-employed, to make claims.

But the $600 extra per week expires at the end of July unless Congress acts to prolong it. For many laid off workers, this will make things harder.

Darcianne Erasmus, who was permanently laid off from her job in the leisure industry in Reno, Nevada, at the end of May, will have her unemployment benefits reduced to just $363 a week after the CARES Act expansion runs out. And new local jobs are hard to come by.

"We have a huge rent crisis in Reno and for me $1,085 a month for a studio was a huge problem even before the pandemic hit," she told CNN Business.

Rent forgiveness and mortgage forbearance programs protected people from being evicted from their homes during the peak of the crisis. But these initiatives are due to expire at some point as well, potentially creating more hardship for families already struggling.

The Trump administration has also said a second round of stimulus checks is possible. The first round paid as much as $1,200 for individuals and $2,400 for families to eligible people. A second stimulus check could be more restrictive.

This recession has created unimaginable hardship across the country. Nearly 9 million adults have less food available since the start of the pandemic and some 3.9 million children are living in food shortages, according to the Census Bureau's Household Pulse Survey.

Federal Reserve Chairman Jerome Powell has repeatedly said the joblessness crisis hurt the most vulnerable workers the most, pointing at low-wage employees, as well as women, Black and Hispanic workers.

President Trump and his team of economic advisors noted that 404,000 Black workers gained employment in June, their second highest gain on record. That's true, but like the other jobs data, the gains follow a deep decline. Black workers are still down 2.8 million jobs since February.

Meanwhile, the unemployment rate for young people, aged 16 to 25, was a staggering 20.7%. Summer months are key for young workers, and jobs early in life set the stage for future earnings and career growth. At the same time last year, it was 8.7%.

For workers who are able to go back to their jobs already, the biggest worry is safety.

In Nevada, where hospitality and tourism are massive drivers of employment and economic activity, workers are scared that they're putting themselves and their families at risk.

"We are very concerned about the reopening. It's leaving the workers very vulnerable," Geoconda Argüello-Kline, secretary-treasurer for the Culinary Workers Union, Local 226, told CNN Business.

On Monday, the union filed a lawsuit against three casino companies in Las Vegas over hazardous working conditions. It demands mandatory face masks, as well as regular Covid-19 testing for employees, among other things.

Sure, people are worrying about being unemployed, Argüello-Kline said, but workers with at-risk family members can't just return to unsafe jobs.

Meanwhile, Nevada had the highest unemployment rate in the United States at more than 25% last month. The state-by-state breakdown of the labor market is published two weeks after the main report.