The US and Iran are on heightened alert after a weekend of military action and fiery rhetoric. Here's how it unfolded 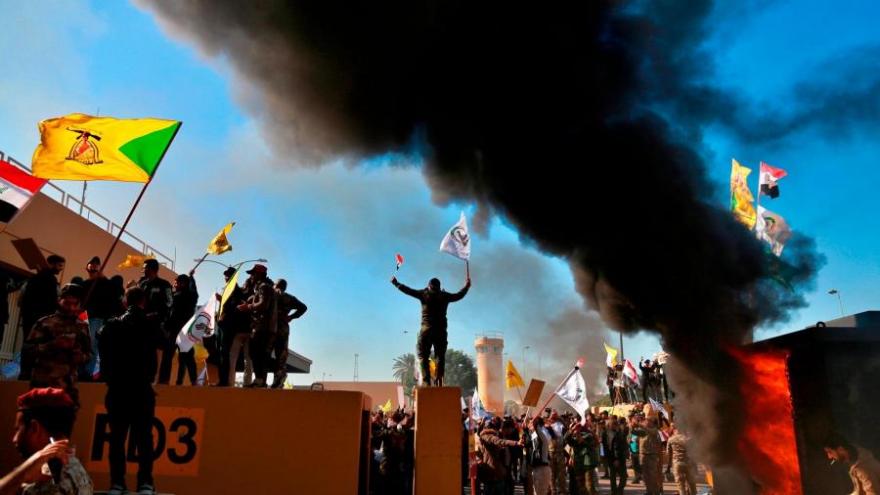 Days after President Donald Trump ordered a drone strike that killed Qasem Soleimani, the military adviser to Iran's Supreme Leader told CNN that Tehran will certainly strike back against US "military sites."

(CNN) -- Days after President Donald Trump ordered a drone strike that killed Qasem Soleimani, the powerful commander of Iran's elite Quds Force, the United States is bracing for possible retaliatory actions by Iran. The military adviser to Iran's Supreme Leader told CNN on Sunday that Tehran will certainly strike back against US "military sites."

Here's how tensions between the two nations have escalated in recent weeks:

A rocket attack on a base near Kirkuk, Iraq, killed a US civilian contractor and wounded several US and Iraq military personnel. A US official told CNN the United States saw similarities between the rocket attack and past attacks that have been linked to a Shiite militia in Iraq believed to be backed by Iran's Islamic Revolutionary Guard Corps.

According to the Pentagon, US forces conducted airstrikes at five facilities in Iraq and Syria controlled by a Shiite military group known as Kataib Hezbollah. American officials have blamed the group for attacks on US-Iraq military facilities, including the one that killed the US civilian contractor two days earlier near Kirkuk.

At least 25 people were killed in the US airstrikes, the Popular Mobilization Units, a Tehran-backed Shiite militia also known as Hashd al-Shaabi, said in a statement.

Before the airstrikes, the United States had been pushed to the brink of retaliation against Iran or its proxies, specifically after attacks last summer on oil tankers in the Persian Gulf and oil facilities in Saudi Arabia and Iran's downing of a US drone in June.

Pro-Iranian protesters attacked the US Embassy in Baghdad, scaling walls and forcing the gates open. The protesters were demonstrating against the American airstrikes on the Iran-backed militia group in Iraq. Trump threatened Iran, warning the country's leaders would be held responsible for any death or destruction after the attack.

The United States deployed 750 troops from a unit in Fort Bragg, North Carolina, to protect the embassy.

Trump said he ordered a precision drone strike at the Baghdad airport to "terminate" Soleimani, a top Iranian commander who was plotting "imminent and sinister attacks on Americans diplomats and military personnel." Others were killed in the attack.

"We took action last night to stop a war. We did not take action to start a war," Trump said in a statement from his Mar-a-Lago resort in Florida.

The Pentagon has blamed Soleimani and his Quds Force for attacks on coalition bases in recent months, including the December 27 strike and the attack on the US Embassy in Baghdad. The United States began deploying thousands of additional troops to the Middle East -- on top on the 750 -- from the same unit in Fort Bragg as tensions mounted.

The deployment surprised some military families.

The Trump administration formally notified Congress about the US drone strike, as required by law. But the administration has yet to publicly explain the legal justification for killing Soleimani, leading Democratic lawmakers to question whether the President had the authority to order the strike without congressional approval.

The lack of evidence provided to lawmakers and the public has fueled skepticism about whether the strike was justified.

The President "has been reluctant to take military action," but the killing of the US contractor late last month, the wounding of others and the protests at the US Embassy in Baghdad "crossed his line," a Republican congressional source familiar with the administration's decision to kill Soleimani told CNN.

Trump vowed specific military action against Iran if it "strikes any Americans, or American assets."

"We have ... targeted 52 Iranian sites (representing the 52 American hostages taken by Iran many years ago), some at a very high level & important to Iran & the Iranian culture" and "if Iran strikes any Americans, or American assets... Iran itself, WILL BE HIT VERY FAST AND VERY HARD," Trump wrote in a series of tweets.

Within the Trump administration, there is widespread opposition to targeting cultural sites in Iran should the US launch retaliatory strikes against Tehran, two senior US officials said.

Soleimani's body arrived in his home country, where thousands mourned him.

Meanwhile, Maj. Gen. Hossein Dehghan, the military adviser to Iran's Supreme Leader, told CNN in an exclusive interview that Tehran's response will "for sure be military." Iran would retaliate directly against US "military sites," Dehghan said in the most specific and direct threat yet by a senior Iranian official following the killing.

In the United States, Secretary of State Mike Pompeo backed Trump's strong threat to Iran. "The American people should know that we will not waver," he said.

The fallout continued in Iraq and Iran.

In Baghdad, parliament voted for the government to work on a plan to end the presence of US troops in Iraq. Trump on Sunday threatened sanctions on Iraq if US troops are expelled.

In Tehran, the government announced that it will no longer limit itself to the restrictions on uranium enrichment and research associated with nuclear operations set forth in 2015 by the Joint Comprehensive Plan of Action, according to a statement on state-run news agency IRNA.