The US and Europe have finally reconnected, but they're moving in different directions on Covid-19 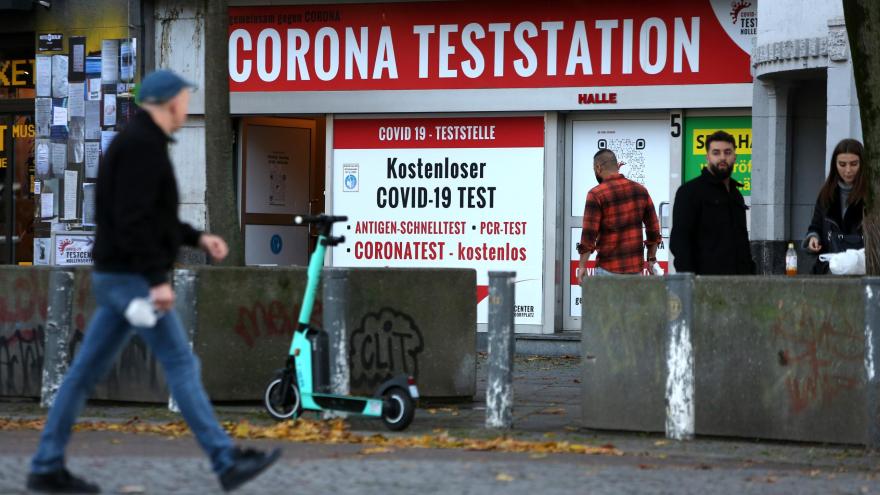 (CNN) -- In September, when the White House announced its long-awaited plan to welcome vaccinated European travelers, the United States was consumed by a Covid-19 surge that far outpaced Europe's.

At that point the US rate of new cases per capita dwarfed Europe's by nearly three to one. While European governments were plotting their roadmaps towards normality, America was battling a rise in infections and warning of pressure on hospitals.

But by Monday, when the new rules came into effect and thousands of tourists jetted across the Atlantic to American cities, the two regions had experienced a dramatic reversal in fortunes.

Europe is now the epicenter of the Covid-19 pandemic once again; it overtook the US case count at the end of October and is now careering towards a difficult winter.

Infections are rising in most of the countries that make up the Schengen area, the 26-country bloc where entry rules to the US have been relaxed. Travelers from the United Kingdom and Ireland were also included in the American policy shift.

"We are at another critical point of pandemic resurgence," WHO regional director Hans Kluge said last week, warning that the pace of transmission across the region was of "grave concern."

"According to one reliable projection, if we stay on this trajectory, we could see another half a million COVID-19 deaths in Europe and Central Asia by the first of February next year," Kluge warned, adding that 43 of the 53 countries on his patch could also see high or extreme stress on hospital beds.

Europe's current wave has not resulted in as high a death rate as the US' summer spike. But it serves as a reminder of the cyclical nature of the pandemic, experts said.

"The situation across Europe was to be expected in some respects. We did anticipate there would be a surge in cases around this time of year," said Paul Wilmes, a professor at the Luxembourg Centre for Systems Biomedicine.

And others note that the relative success of some highly vaccinated nations such as Spain and Portugal -- where cases have remained at manageable levels despite the general upward trends across the continent -- can serve as an example to governments in Europe and elsewhere.

"It's happening in many countries, but it's not inevitable," said Martin McKee, professor of European public health at the London School of Hygiene and Tropical Medicine. "We need to look at what is happening and which policies are giving rise to it ... there are things that can be done."

The US' vaccine rollout outpaced Europe's in its early months, but the two regions crossed paths in the summer when the EU's rate of new shots delivered overtook that of the US.

Now attention is turning to unvaccinated pockets of both regions, as leaders struggle to kickstart their plateaued vaccine drives.

US President Joe Biden has amplified his rhetoric towards unvaccinated people in recent weeks, telling reporters in the White House they "can cause a lot of damage, and they are."

"The unvaccinated overcrowd our hospitals, are overrunning the emergency rooms and intensive care units, leaving no room for someone with a heart attack, or pancreatitis, or cancer," the President said in September.

A handful of European governments are starting to mimic his bullish stance, as they grow frustrated with stalling rollouts and adopt a more direct approach towards those who are hesitant to get a shot.

Germany's Health Minister Jens Spahn said this month the country is experiencing a "massive" pandemic of the unvaccinated. "The truth is that there would be far fewer Covid-19 patients in [intensive care] if everyone who could do it got a vaccination," he said.

"There is more and more recognition that those people who are unwilling to contribute to solving the challenges of the pandemic are placing other people at risk," McKee said. "They are undermining the recovery for other people, and there is an increasing impatience" towards them from politicians and the public, he added.

The vaccination rollout has slowed to a crawl in parts of the South and the Midwestern American states, with a strong correlation linking low vaccine levels to more heavily Republican and less college-educated states. Of the 15 US states with the lowest vaccination rates, all but one voted for Donald Trump in the 2020 election.

In Europe, a different divide in vaccine uptake has become equally clear; countries in the west and north of the continent have posted high figures, led by Portugal and Spain on Europe's Iberian peninsula where the share of the population that is fully vaccinated is 87% and 80% respectively. But towards the east, that trend moves sharply downwards.

Romania and Bulgaria, which are not included in the Schengen travel area and therefore not included in the US' relaxed entry rules, have particularly struggled with administering doses. Slovakia, Poland, Slovenia and the Czech Republic have also failed to keep pace with their neighbors to the west, with all four countries vaccinating less than 60% of their population so far.

"This is not new -- we have seen this for other vaccines," said Wilmes. "In some countries you see inherent levels of conformity to go along with vaccination campaigns, compared to others."

"We know that vaccination has an impact on transmission -- the more people vaccinated within a population, the more you can limit transmission," he added. But he noted that waning immunity has become a "clear reality" and has posed an additional challenge to governments.

The other major plank of the American approach has been on face masks; Biden made face coverings mandatory on federal property during his first day in office, and has since urged states to ensure their use in schools, offices and elsewhere.

But the mask has become a symbol of a divided society in the US, and partisan leanings factor strongly into how frequently they are used.

Europe has avoided that divide, experts say. "People do not perceive mask wearing as an infringement on personal liberties the way that some parts of the US do. There's definitely a cultural difference," said Wilmes.

Some highly vaccinated countries, such as Portugal and Spain, have been cautious in easing rules on mask wearing and still require them in certain settings. But nations like the UK and Denmark have revoked rules altogether, leaving the decision up to citizens -- in the UK, the use of masks has noticeably dropped off since.

Rules on travel in Europe have eased in recent months, and many countries have dialed back restrictions on gatherings -- leading to concerns on the continent that the new surge in cases may be accompanied by a return of measures.

"The countries that have relaxed measures did so at times when the case numbers were low, and against the backdrop of many people being vaccinated," Wilmes said. "We don't have crystal balls -- it's a hard judgment call that governments have to make."

Many European countries, such as France, Italy and Germany, have meanwhile embraced vaccine passports, with the EU's digital certificate system, and some national equivalents, used to approve entry to bars, clubs and restaurants.

The safeguards have presented "an important measure in trying to limit transmission," Wilmes said.

"Vaccine passports have been helpful both in limiting unvaccinated people from mixing together, but also encouraging people to get vaccinated," added McKee.

The US has not followed suit on the EU's system, but Biden has pushed ahead with plans to implement a vaccine requirement for certain companies and fields. His administration announced last week that its vaccine rules, which apply to private businesses with 100 or more employees, certain health care workers and federal contractors, will take effect January 4.