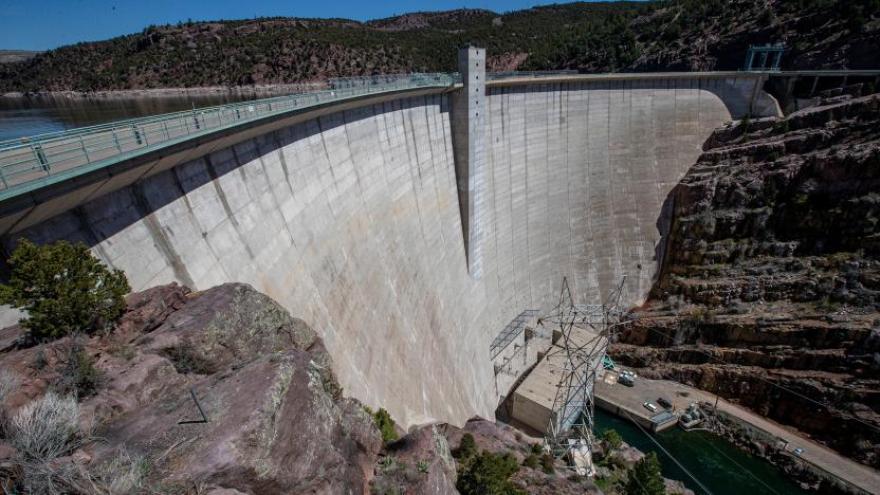 The Flaming Gorge Dam on the Colorado River.

(CNN) -- Upstream reservoirs in the Colorado River Basin might not have enough water to keep Lake Powell above a critical threshold indefinitely, federal officials have warned in recent weeks, as the West's ongoing megadrought saps water from across the West.

The Flaming Gorge reservoir on the Green River, which this year is releasing a huge amount of water downstream to help Lake Powell, may only have enough water left for two more similar emergency releases, US Bureau of Reclamation officials told CNN, though they have yet to fully model the situation.

Federal officials took emergency steps in May to use water from upstream reservoirs to boost Lake Powell's level and buy the surrounding communities more time to plan for the likelihood the reservoir will soon fall too low for the Glen Canyon Dam to generate hydropower.

The dam is a key source of energy in the region, generating power for as many as 5.8 million homes and businesses in seven states, and is at high risk of being forced offline should the lake's level drop below 3,490 feet above sea level.

Water managers have worked hard to prevent Powell from falling below its critical threshold. Their first step was to release more water from upstream reservoirs in the Colorado River Basin, like Flaming Gorge. The second was to hold back water in Lake Powell itself instead of sending it downstream to Lake Mead, which is the largest reservoir in the country.

But using water from Flaming Gorge to keep Lake Powell afloat was just "a buffer," according to Jim Prairie, the agency's Upper Colorado Basin research and modeling group chief, and couldn't be a long-term solution. Prairie noted in August, based on its water level at the time, Flaming Gorge would only be able to handle two more similar emergency releases.

"What this [process] is doing is just buffering us for a year, and we probably have an opportunity to do that maybe two more times, and then there will be no more capacity," Prairie said. "So something else will have to fill that 500,000 acre-feet, some other mechanism."

Water deliveries from Flaming Gorge to Lake Powell are being made in varying amounts each month to fulfill a 500,000 acre-feet total by the end of April 2023, according to the bureau. Because of the release, the level in Flaming Gorge is expected to drop by roughly 9 feet, though it will help increase Lake Powell's elevation by around 16 feet.

Prairie said the bigger challenge is to find long-term solutions to the basin's crisis.

"And that's really the challenge that's being put forward to all the [Colorado River] Basin states," he added. "How can we collaborate and work together to find these ways to be able to provide that additional needs at these reservoirs if we want to maintain them?"

Eric Kuhn, a retired former manager of the Colorado River Water Conservation District, told CNN that this is not a surprise at all.

"There's really only one upstream reservoir — Flaming Gorge — that has any significant capacity," Kuhn said. "And they've used it two years in a row to the tune of about 700,000 acre feet."

Notably, Prairie's outlook for Flaming Gorge does not take into account future weather in the West. For instance, a wetter-than-average winter this year, which would supplement all the reservoirs in the Colorado River Basin, could negate the need for emergency releases.

But Kuhn said that wouldn't be all good news for Lake Powell.

"Refilling these reservoirs that have been drained comes first, that's where the water goes first," Kuhn said. "If you rob Peter to pay Paul, the next time we have a decent runoff, a lot of water is gonna go to recovery storage in these upstream reservoirs which will reduce the inflow to Powell, so it reduces the rate of recovery of Powell in a slightly above average, wetter year."

Justin Mankin, co-lead of the National Oceanic and Atmospheric Administration's Drought Task Force, previously told CNN managing water in the Colorado River Basin through all of its reservoirs is "kind of like the central bank of an economy, drawing money from local banks to kind of keep the economy afloat."

"Lake Powell is the central bank of the Colorado River Basin," Mankin said. "Maybe that's workable for a little while, but just like a household, the longer it's in debt, the harder it gets. And it's really the same thing with these reservoirs."

Without the emergency steps it took this year, including the Flaming Gorge releases, the bureau estimated there was about a 25% chance the Glen Canyon Dam could have stopped producing hydropower by January.

"Everyone relies on the collective storage of the watershed," Jack Schmidt, director of the Center for Colorado River Studies at Utah State University, told CNN. "The primary issue is the total storage in the entire system in relation."

For the rest of the year, the water releases from Flaming Gorge and Blue Mesa reservoirs are set to continue until October; meanwhile, Navajo Lake on the Colorado-New Mexico border will ramp up its releases in November and December. As a result of these emergency releases, each reservoir will see a major plunge: four feet at Flaming Gorge; eight feet at Blue Mesa; and two feet in Navajo Lake.

Schmidt said it is important to remember all the reservoirs are connected. The total capacity of all federal reservoirs in the Colorado River Basin is about 58 million acre feet, 50 million of which is Lake Powell and Lake Mead combined.

"If one adds all of the water in all of the reservoirs, then the system is now at 34% of capacity," Schmidt said.

The decisions made for Lake Powell will always affect its downstream neighbor, Lake Mead. Because of Lake Mead's low level, the federal government in August announced additional water cuts for the Southwest, which will start in January 2023.

CORRECTION: An earlier version of this story contained a photo caption that listed an incorrect location for the Flaming Gorge Dam. It is on the Green River.