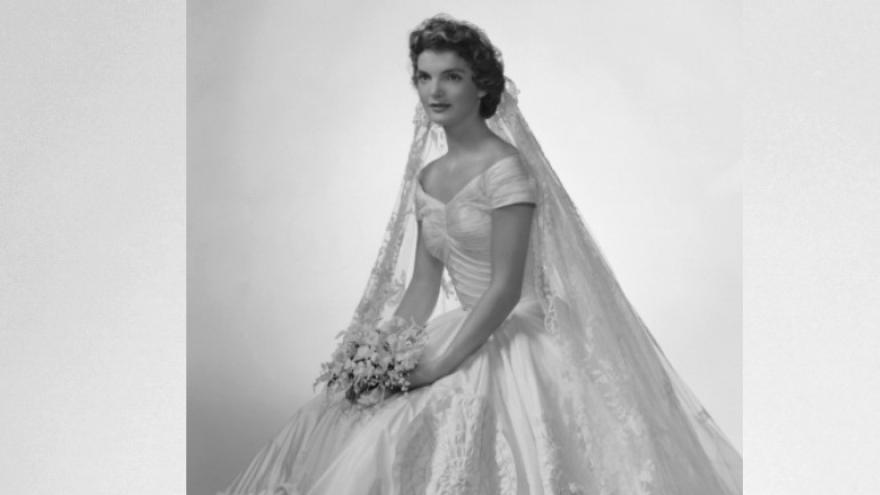 (CNN) -- Some 800 guests saw the dress at the ceremony at St. Mary's Roman Catholic Church in Newport, Rhode Island, and 400 more watched it glide through the reception that evening. And then there were the 3,000 well-wishers who broke through police barricades to witness Jacqueline Lee Bouvier's arrival at her wedding to then Sen. John Fitzgerald Kennedy.

A photo of the newlyweds ran on the front page of The New York Times on September 13, 1953. But the grainy black-and-white shot, the bride half obscured by her husband, couldn't do justice to the bouffant skirtand the layers of silk taffeta, the intricate scallop pintucks and tiny flowers of wax -- a fitting choice for the woman who would go on to become American royalty.

The gown, like those worn by Kennedy's bridesmaids, was the work of African American designer Ann Lowe, who died in February 1981.

"That dress she made for Jackie Kennedy was widely photographed. A lot of people saw it and it no doubt influenced average American wedding dresses and ball gowns," said Elizabeth Way, an assistant curator at The Museum at FIT. "The fact that (the dress) came from the creativity of a Black woman really speaks to how instrumental Black people have been in shaping American culture." 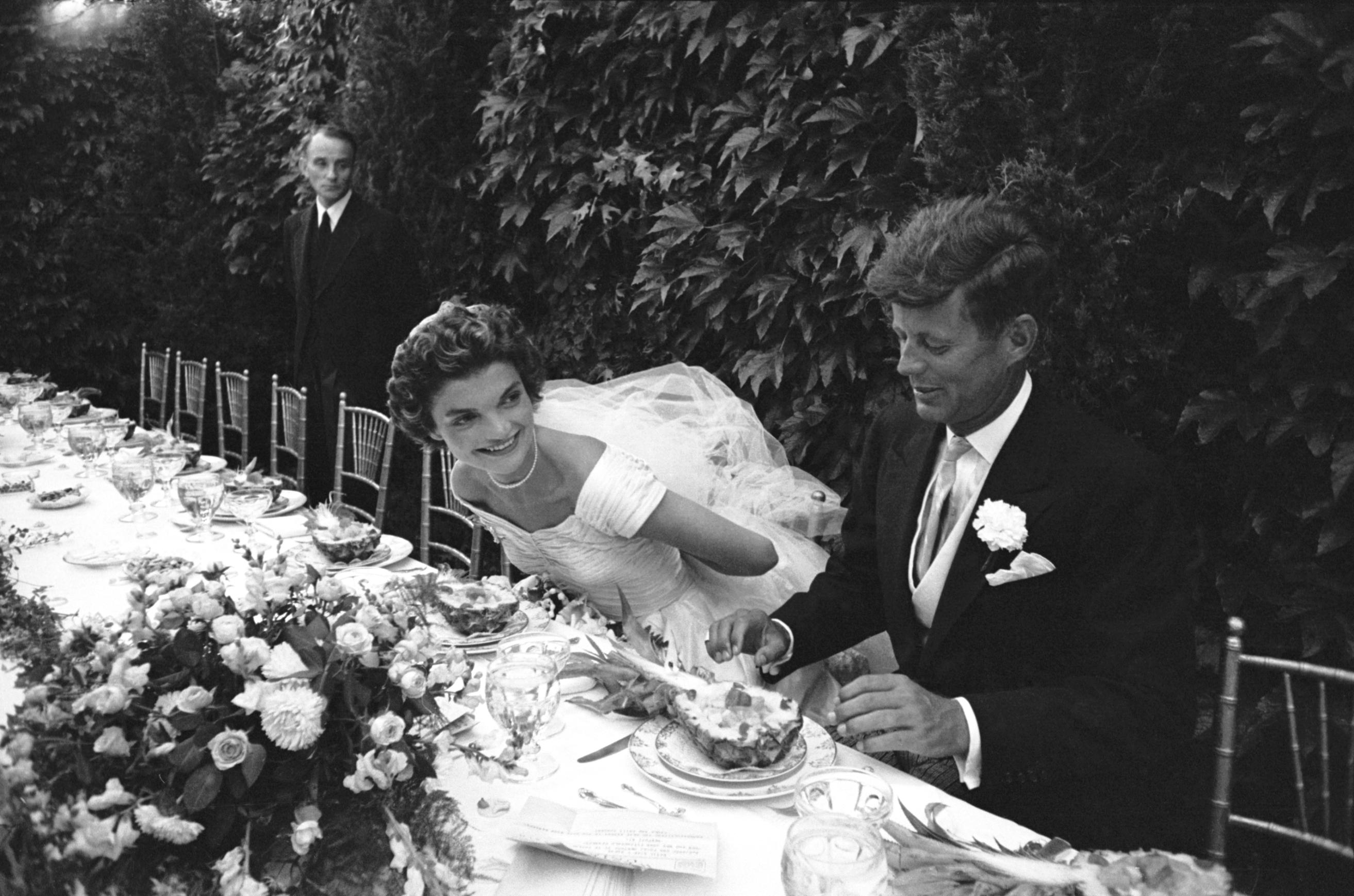 And while the dress delighted the American public, the same cannot be said for the bride's own reaction. According to fashion historian Kimberly Chrisman-Campbell, who is the author of the recently released book "The Way We Wed: A Global History of Wedding Fashion," Kennedy was no fan of the dress she wore to walk down the aisle.

"Even though it's a beautiful dress, it was not what she wanted, and she actually compared it to a lampshade," Chrisman-Campbell explained. "It was chosen by her father-in-law-to-be, who wanted to create an American royalty moment and really set up his son as the heir to the family dynasty."

At that point, Lowe was an established arbiter of American high-society style, delighting wealthy clients across the country (including Jaqueline's mother, Janet Lee Auchincloss, who commissioned Lowe to create her daughter's debutante and wedding dresses) with made-to-order princess silhouettes and couture-level embellishments. Years later, The Saturday Evening Post described her as "society's best kept secret" and "unfamiliar except to the very rich."

An unrepentant snob, Lowe was selective about her clients. Only the most elite were deserving of her efforts -- the Rockefellers and the du Ponts of the world, as well as stars like Olivia de Havilland, who wore one of Lowe's hand-painted floral designs the night she won best actress at the 1947 Academy Awards.

"I love my clothes and I'm particular about who wears them," Lowe said in an interview with Ebony magazine. "I'm not interested in sewing for cafe society or social climbers. I do not cater to Mary and Sue. I sew for the families of the Social Register."

To cater to her clientele, there was seemingly nothing she wouldn't do. After a flood in her Manhattan studio destroyed the Kennedy dresses just 10 days before the ceremony, she and her team worked day and night to ensure a new set was completed on time. She never mentioned a word of it to the family, and absorbed the additional costs herself. 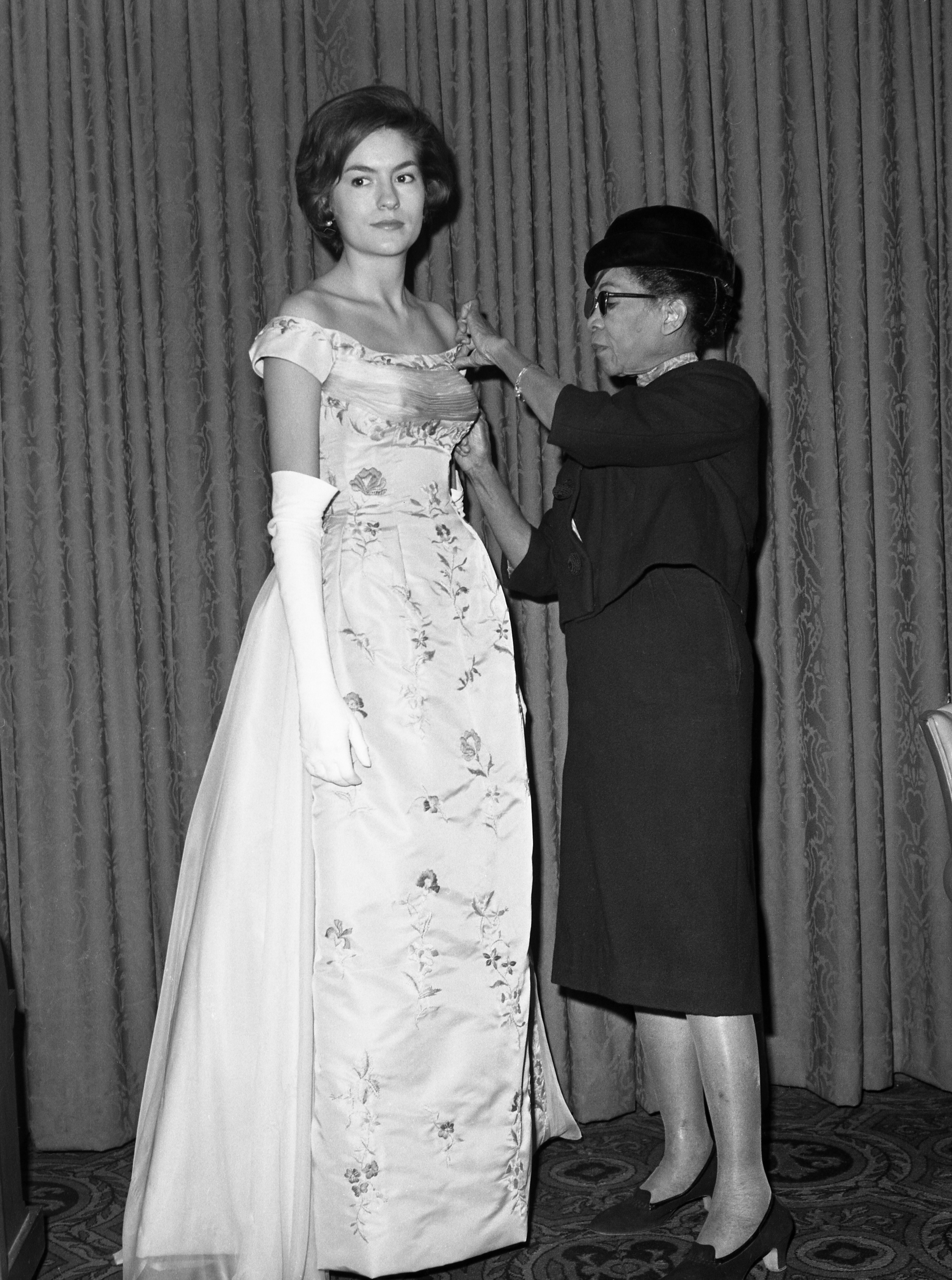 Ann Lowe was born in Clayton, Alabama, in 1898. Her grandmother, who had been born into slavery, and her mother ran an exclusive dressmaking business for wealthy patrons, and Lowe learned their craft from a young age.

"She had been working in dressmaking since she was a little girl, so she really had decades of experience by the time we get to the making of these ballgowns, these wedding gowns, these debutante gowns in the 1950s," Way said.

At 16, Lowe took over the family business after the death of her mother. She later studied design in New York, segregated from her White peers (she graduated after only six months because of her exceptional abilities) before setting up shop in Florida, where she built her reputation for extravagance and exclusivity. After a decade, she returned to Manhattan to do the same on the East Coast.

But the extreme wealth of the clients she so cherished wasn't enough to buoy her business. They would routinely talk her into lowering her prices, and she would often end up losing money from commissions. In 1963, she declared bankruptcy. (A longstanding rumor suggests Kennedy might have anonymously paid off her debts to the IRS.) By the time she retired in 1972, she was penniless.

"She does the same amazing kind of job that Mainbocher does," fashion columnist Eugenia Sheppard once remarked, referring to Main Rousseau Bocher, Lowe's contemporary and the first American couturier. "The difference is that Mainbocher is a businessman as well as a designer, and he charges what he has to, to stay in business."

Since her death, the name Ann Lowe has meant little outside of fashion history circles. But in recent years, there has been a sharp increase in interest around the designer. Both an Ann Lowe biography and an Ann Lowe children's book have been published, and a historical fiction novel, by Piper Huguley, is in the works. Her designs have been exhibited at the National Museum of African American History and Culture, and as part of FIT's 2017 exhibition "Black Fashion Designers."

Lowe's skill and success in a field where Black women are still routinely erased and excluded disrupts prevailing narratives about not just fashion industry, but American history.

"With all the political movements happening right now, that have been building over the last century, people are interested in the history of Black artists and Black creatives in so many industries, and it's great to know that (Black people's participation in fashion) didn't start in the beginning of the 2000s," Way said. "Black designers have always been working in the industry. There is a legacy there."