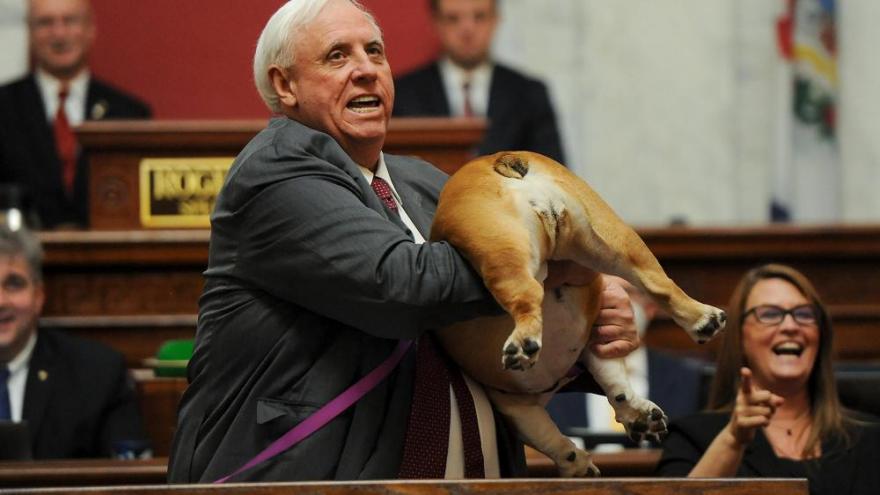 West Virginia Gov. Jim Justice holds up his dog Babydog's rear end as a message to people who've doubted the state as he comes to the end of his State of the State speech in the House chambers, Thursday, January 27, 2022, in Charleston, West Virginia.

(CNN) -- West Virginia Gov. Jim Justice had some back talk for his state's critics when he hoisted the posterior of his bulldog, Babydog, during his State of the State address and told them to "kiss her hiney."

"Absolutely people doubted us. They never believed in West Virginia," Justice, a Republican, said Thursday, ending his annual speech before a joint session of the West Virginia legislature. "They told every bad joke in the world about us."

That's when Justice lifted up his family's bulldog and showed off her behind. "And so, from that standpoint, Babydog tells Bette Midler and all of those out there, kiss her hiney."

The pooch's performance drew laughter and smiles from lawmakers.

"This has been the year of Babydog, hasn't it?" Justice said of his family's dog, who had become the mascot for his state's coronavirus vaccination sweepstakes.

The governor has been known for his love of props to illustrate a point, including one time in which he brought real cow dung to the statehouse to veto a budget bill that he called a "bunch of political bull you-know-what."

Justice had to reschedule this year's in-person delivery of his State of the State address because he had tested positive for Covid-19.