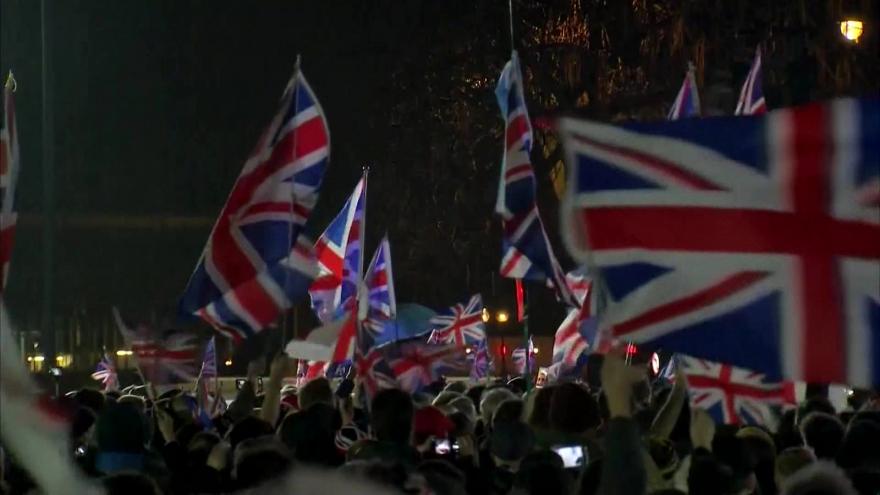 (CNN) -- Brexit has happened. After 1,316 days of political turmoil, the UK now stands alone as the first nation to have ever left the European Union.

It has ended the careers of two Prime Ministers and left the very future of the United Kingdom in question. Scotland's case for independence is becoming harder to ignore while Britain's perceived selling out of Northern Ireland has played into the hands of those wishing to see Irish unification.

That's just the politics: Britain's economic future and place in the world have not been this uncertain since the end of the World War II.

Speaking to the nation an hour before Brexit finally happened, Prime Minister Boris Johnson acknowledged that the country was divided: "For many people this is an astonishing moment of hope, a moment they thought would never come. And there are many of course who feel a sense of anxiety and loss ... I understand all those feelings, and our job as the government -- my job -- is to bring this country together now and take us forward."

Johnson has political capital to spend. His election landslide last year means he has the power to start rebuilding the UK in his own image. It also means he can remold the country's position on the international stage. And in a world of shifting geopolitics, whatever path Johnson decides to walk will have implications beyond Britain's borders.

The key question that needs answering in the next 11 months: Will the UK stick with its European neighbors and their multilateral view of the world? Or will it drift across the Atlantic and team up with an increasingly confrontational American foreign policy?

Why 11 months? Because, according to the deal Britain signed with the EU, this Brexit transition period ends on December 31, and whatever deal the two parties have reached on their future relationship -- if any -- kicks in.

Mark Leonard, director of the European Council on Foreign Relations think tank, says that Johnson faces a huge strategic choice: "For decades, the foundation of British foreign policy has rested on two pillars: the UK has been an influential member of the EU; it is also part of the transatlantic alliance, with NATO and the US at its core."

In an ideal world, post-Brexit Britain would now be free to forge new economic relations with both the EU and the US, while maintaining a diplomatic equilibrium that allows it to be a power broker between the two.

But as Trump's America drifts further from the European agenda on so many big issues -- from climate change to Iran engagement with China -- any decision Johnson makes favoring one party risks straining relations with the other.

Johnson is already attempting to navigate the China minefield that stretches across Europe.

The EU's China problem is acute. On one hand, stagnating European economies benefit from Chinese investment. On the other, that investment comes with the potential security risk of allowing state-owned Chinese companies to operate in Europe. And that has implications for Europe's intelligence-sharing allies, such as the US.

Earlier this week, Johnson's government decided that it would allow the Chinese telecoms firm Huawei to build part of the UK's 5G network, despite serious security concerns. The government said Huawei's role in the project would be restricted to areas that meant it wasn't a risk to the UK.

One person unlikely to be happy about this is US President Donald Trump. In his economic war with China, Trump is looking for friends. And as the UK leaves the EU, desperate to sign trade deals -- especially with the US -- he sees an opportunity to pull the UK into his orbit.

Trump seemed distracted as the news broke on Tuesday and it's possible that London's assurances were enough for the President. However Johnson chooses to handle the Huawei issue going forward, officials in both Brussels are DC will be paying very close attention. And whatever decisions he takes, it creates an immediate short-term problem for Europe's own power-balancing act between the US and China.

"The EU's top priority is balanced relations between the big two: China and America," says Steven Blockmans, head of foreign affairs at the European Center for Policy Studies. "If the UK has a closer relationship with either, it could create problems for Europe."

Europe also has a complicated relationship with Russia. Many EU nations rely on Russian investment and natural resources. But Europe has led a sanctions charge on Russia for its illegal annexation of Crimea and alleged state-sanctioned attacks on Russian dissidents living in Europe. Arguably the most high-profile of these cases was the poisoning of Sergei Skripal in England. Russia has repeatedly denied any involvement.

Johnson was British foreign secretary at the time and was quick to blame Moscow, driving a push for the international expulsion of Russian diplomats.

That was then. During last year's election, Johnson made big spending promises to the public he now leads. Russian investment could help make ends meet, given that the City of London is a favored destination for wealthy Russians.

"A clampdown on assets that are held or transferred through the city is crucial to maintaining a common European stance," says Blockmans. Johnson's advisers assume he will stick to his hard line on Russia, but there are long-term concerns in eastern Europe. If he budges even slightly, it causes problems for Ukraine, whose independence from Russia is an EU priority.

Sarah Lain, an associate fellow at the Royal United Services Institute, says that Brexit "creates uncertainty over what resources the UK will have to maintain its position on eastern Europe."

While the UK remains committed to supporting Ukraine, Kiev's concern is that, "given the possible economic impact from Brexit and the perceived blow to the UK's reputation as a strong foreign policy actor," Britain might be unable to support Ukraine in the same way, says Lain.

Johnson's policy shifts could be subtle. But they will color a complicated picture in the international community. A big economy with serious diplomatic power nudging in one direction shifts the weight in a delicate balancing act.

The most complicating factor in all of this, of course, is the unreliable figure currently occupying the White House -- who happens to be up for reelection in November.

"We are in a period of negotiating a new world order, and Britain needs to navigate a path that maintains strong relations with as many of our allies as possible," says Sophia Gaston, managing director of the British Foreign Policy group.

That new world order will largely be determined by how successful Trump is in his attempts to reshape the world to America's advantage, and of course, if he's still in the White House this time next year. "The UK is leaving the EU at a time when Trump is trying to renegotiate the transatlantic relationship as he pivots his attention from Europe and the Middle East to competition with China and Asia," says Leonard.

It's no secret that Trump's priority with Brexit is a trade deal that could buck global norms on food standards and the regulation of medicines. Doing so would present the US with the opportunity to set precedents in trade that were previously unthinkable -- and could even see a hike in global drug prices.

For Johnson, a trade deal with Washington would be a political prize, proving that Brexit had been worth it all along. However, a wide-ranging deal with America could damage the UK's relationship with the EU. Leonard says that Trump, unlike presidents before him, is "much more transactional" in his dealings with other nations. The price of cozying up to him could cost Johnson big with European allies.

So, what will he do? Gaston believes that Britain will ultimately "operate as a mid-tier military power with top-tier assets in soft power, diplomacy and development."

The big question: what global status does Johnson want the UK to have five years from now, when Brexit is done and dusted? "There's a danger that as Britain leaves the EU, it puts getting trade deals above all else and will not be a big strategic player as it becomes obsessed with bilateral relationships," says Leonard.

As foreign secretary, Johnson didn't say much about how he saw the new world order. As the UK moves into its brave new future, the world is still in the dark as to exactly who will benefit from its considerable heft.

And while some claim that this won't matter, it's not a view shared by those at the helm of many world powers. If Johnson does decide to move further from Europe, there's "a danger from a European perspective that Britain could become a disrupter, a bit like Turkey or Russia, that tries to divide and rule different European countries, is not reliable and is unpredictable," says Leonard.

And if it does drift across the Atlantic towards America, Brussels could soon miss having one of the world's loudest diplomatic voices, with nuclear weapons, a big economy, a world-class intelligence network and a permanent seat on the UN security council, firmly in its ranks.