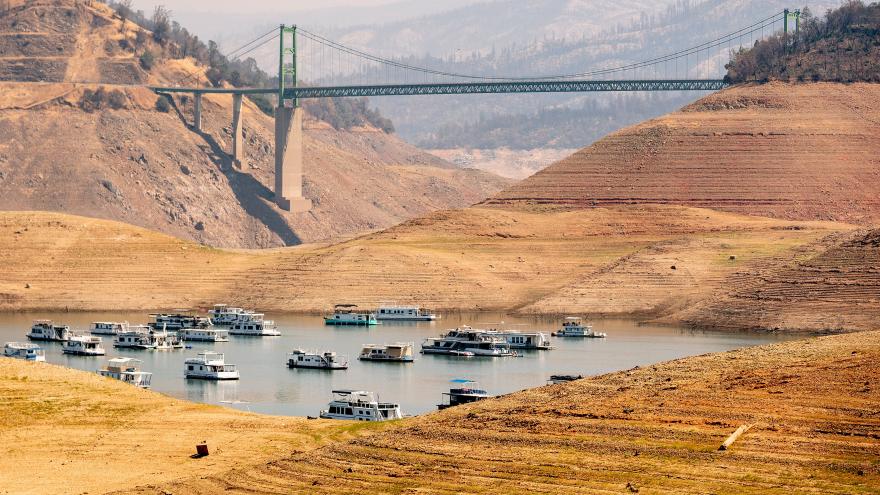 (CNN) -- Against the backdrop of the water crisis in the Colorado River Basin, where the country's largest reservoirs are plunging at an alarming rate, California's two largest reservoirs — Shasta Lake and Lake Oroville — are facing a similar struggle.

Years of low rainfall and snowpack and more intense heat waves have fed directly to the state's multiyear, unrelenting drought conditions, rapidly draining statewide reservoirs. And according to this week's report from the US Drought Monitor, the two major reservoirs are at "critically low levels" at the point of the year when they should be the highest.

This week, Shasta Lake is only at 40% of its total capacity, the lowest it has ever been at the start of May since record-keeping began in 1977. Meanwhile, further south, Lake Oroville is at 55% of its capacity, which is 70% of where it should be around this time on average.

Shasta Lake is the largest reservoir in the state and the cornerstone of California's Central Valley Project, a complex water system made of 19 dams and reservoirs as well as more than 500 miles of canals, stretching from Redding to the north, all the way south to the drought-stricken landscapes of Bakersfield.

Shasta Lake's water levels are now less than half of historical average. According to the US Bureau of Reclamation, only agriculture customers who are senior water right holders and some irrigation districts in the Eastern San Joaquin Valley will receive the Central Valley Project water deliveries this year.

"We anticipate that in the Sacramento Valley alone, over 350,000 acres of farmland will be fallowed," Mary Lee Knecht, public affairs officer for the Bureau's California-Great Basin Region, told CNN. For perspective, it's an area larger than Los Angeles. "Cities and towns that receive [Central Valley Project] water supply, including Silicon Valley communities, have been reduced to health and safety needs only."

A lot is at stake with the plummeting supply, said Jessica Gable with Food & Water Watch, a nonprofit advocacy group focused on food and water security as well as climate change. The impending summer heat and the water shortages, she said, will hit California's most vulnerable populations, particularly those in farming communities, the hardest.

Lake Oroville is the largest reservoir in California's State Water Project system, which is separate from the Central Valley Project, operated by the California Department of Water Resources (DWR). It provides water to 27 million Californians and 750,000 acres of farmland.

Last year, Oroville took a major hit after water levels plunged to just 24% of total capacity, forcing a crucial California hydroelectric power plant to shut down for the first time since it opened in 1967. The lake's water level sat well below boat ramps, and exposed intake pipes which usually sent water to power the dam.

Although heavy storms toward the end of 2021 alleviated the lake's record-low levels, resuming the power plant's operations, state water officials are wary of another dire situation as the drought worsens this summer.

"The fact that this facility shut down last August; that never happened before, and the prospects that it will happen again are very real," California Gov. Gavin Newsom said at a news conference in April while touring the Oroville Dam, noting the climate crisis is changing the way water is being delivered across the region.

According to the DWR, Oroville's low reservoir levels are pushing water agencies relying on the state project to "only receive 5% of their requested supplies in 2022," Ryan Endean, spokesperson for the DWR, told CNN. "Those water agencies are being urged to enact mandatory water use restrictions in order to stretch their available supplies through the summer and fall."

The Bureau of Reclamation and the DWR, in concert with federal and state agencies, are also taking unprecedented measures to protect endangered winter-run Chinook salmon for the third drought year in a row. Reclamation officials are in the process of securing temporary chilling units to cool water down at one of their fish hatcheries.

Both reservoirs are a vital part of the state's larger water system, interconnected by canals and rivers. So even if the smaller reservoirs have been replenished by winter precipitation, the plunging water levels in Shasta and Oroville could still affect and drain the rest of the water system.

The water level on Folsom Lake, for instance, reached nearly 450 feet above sea level this week, which is 108% of its historical average around this time of year. But with Shasta and Oroville's low water levels, annual water releases from Folsom Lake this summer may need to be bigger than normal to make up for the other reservoirs' significant shortages.

California depends on storms and wintertime precipitation to build up snowpack in the Sierra Nevada, which then gradually melts during the spring and replenishes reservoirs.

Facing back-to-back dry years and record-breaking heat waves pushing the drought into historic territory, California got a taste of the rain it was looking for in October, when the first big storm of the season pushed onshore. Then in late December, more than 17 feet of snow fell in the Sierra Nevada, which researchers said was enough to break decades-old records.

But precipitation flatlined in January, and water content in the state's snowpack this year was just 4% of normal by the end of winter.

Gable said as California enters a future much hotter and drier than anyone has experienced before, officials and residents need to rethink the way water is managed across the board, otherwise the state will continue to be unprepared.

"Water is supposed to be a human right," Gable said. "But we are not thinking that, and I think until that changes, then unfortunately, water scarcity is going to continue to be a symptom of the worsening climate crisis."