The Trump Plaza Hotel and Casino just got demolished 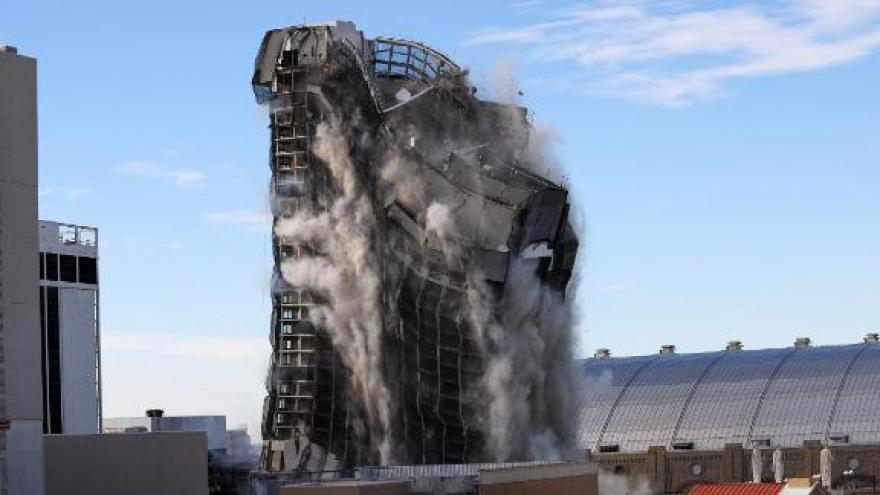 (CNN) -- The Trump Plaza Hotel and Casino in Atlantic City has been demolished, ending a nearly 40-year run at the New Jersey shore.

Trump Plaza opened in 1984 and was once a key aspect of former President Donald Trump's sprawling real estate portfolio. The casino was shuttered in 2014, and the building has since fallen into disrepair and had to be demolished, city officials recently said.

Billionaire investor Carl Icahn currently owns the site and has not announced future plans for it, according to CNN affiliate WPVI. Onlookers flocked to the area to watch the implosion and nearby hotels offered special packages for prime views.

About 3,000 pieces of dynamite were used to implode the 34-story building, the New York Times reported. The destruction took only a few seconds.

Trump's decades-long relationship with Atlantic City has been marked by both grandiose ambition and rocky finances. His most noted property, the Trump Taj Mahal hotel and casino, which he once dubbed "the eighth wonder of the world," officially closed in 2016 with little fanfare. It has since reopened under the Hard Rock brand.

In 2014, Trump sued Trump Entertainment Resorts to take his name off both casinos. He said in the lawsuit that Trump Resorts had allowed the Taj and its sister casino, Trump Plaza, "to fall into an utter state of disrepair," which tainted the "superior reputation" of his brand.

By the time of its closure, Trump owned only the name attached to the Taj, with Icahn controlling the rest. At its peak, the Plaza hosted world-famous boxing matches, high-profile concerts and celebrity ebents.

Both casino's failures shadow broader struggles for Atlantic City, with vacationers going to other gambling locales such as Las Vegas or nearby casinos.