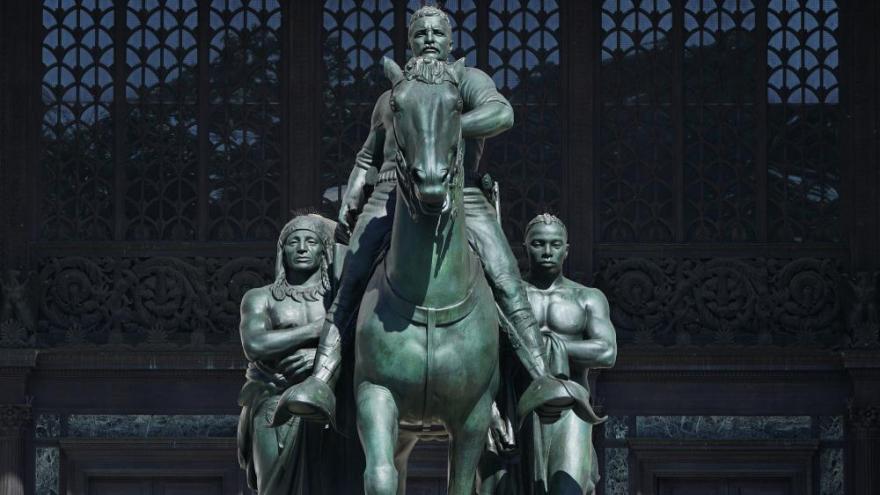 The Theodore Roosevelt Equestrian Statue features Roosevelt on horseback towering over a Native American man and an African man.

(CNN) -- A controversial statue of Theodore Roosevelt will finally be moved from its current location after years of debate -- and one year after a formal request for its removal.

The statue debuted in 1940 and stands in front of the American Museum of Natural History in New York. It features the 26th president on horseback flanked by a Native American man on one side and an African man on the other -- conveying a "racial hierarchy that the museum and members of the public have long found disturbing," wrote the museum in its initial removal request last June.

On Monday, the New York City Public Design Commission voted unanimously to remove the statue, marking the final step after a year of discussion.

Sam Biederman, chief of staff and assistant commissioner at NYC Parks, called the move to remove the statue "incredibly rare," but "the right course of action."

"Though historical circumstances demonstrate that this sculpture was not erected with malice of intent, the compositional hierarchy ... visually supports the thematic framework of colonization and racism," he said during Monday's meeting.

Mayor Bill de Blasio supported the removal effort last year, calling it "the right decision and the right time" in a statement to CNN.

"The American Museum of Natural History has asked to remove the Theodore Roosevelt statue because it explicitly depicts Black and Indigenous people as subjugated and racially inferior," his office said at the time.

Though the statue's new home has not yet been determined, the city and museum will coordinate a long-term loan of the statue to publicly accessible grounds or a cultural institution dedicated to Roosevelt, officials with NYC's Public Design Commission said.

The move by the city and the museum comes as statues, commonly odes to the Confederacy, are being taken down across the US. Earlier this year, statues of two Confederate generals were removed in Georgia. In December, Virginia removed a statue of Gen. Robert E. Lee from the US Capitol, with plans to replace it with a statue of Barbara Rose Johns, a Black woman who played a key role in the Civil Rights Movement.