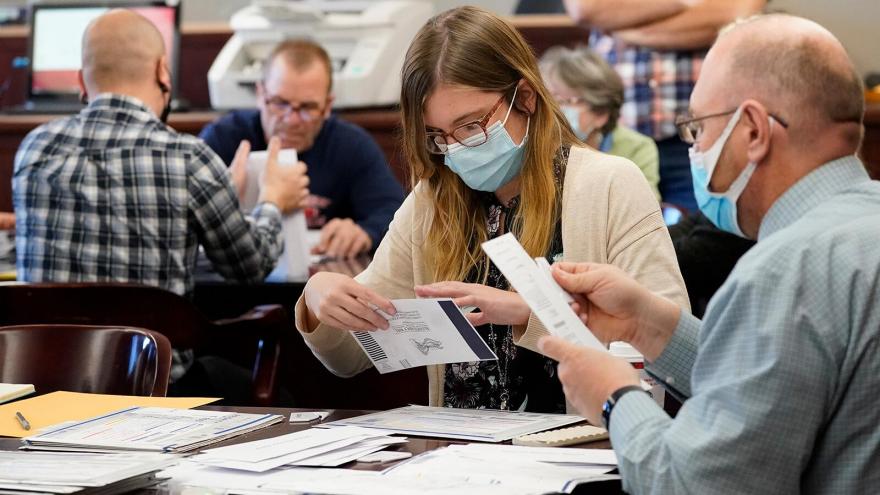 Luzerne County workers canvas ballots that arrived after closing of voting until Friday at 5 p.m. and postmarked by Nov. 3 as vote counting in the general election continues, Friday, Nov. 6, in Wilkes-Barre, PA.

(CNN) -- It's four days after the election and the race for the White House is still too close to call.

Ballots are still being counted in several key states that will determined the outcome of the presidential race -- Arizona, Georgia, Nevada and Pennsylvania

As the count continues to narrow election officials are starting to throw around technical terms most voters don't usually hear.

A quick glossary to help you navigate the day

Absentee ballots: Traditionally, voters who could not get to a polling place for Election Day have been allowed to request early ballots, which were usually returned by mail. Today, the term can effectively be used interchangeably with mail-in ballots. Read CNN's fact check here.

Adjudication: Some ballots receive extra scrutiny in a process known as ballot adjudication. Though the intricacies of the process vary state by state, it typically involves a small panel of people reviewing a ballot to determine either the voter's intent or whether the ballot can be counted at all based on whether the voter was eligible to cast it. Read more here.

Curing: When a signature is missing or doesn't match the one on file, or there is another issue with how the voter completed the ballot, some states require officials to contact the voter so they can correct the mistake, a process known as "curing." Read more here.

Late-arriving ballots: Some states accept mail-in ballots that are delivered back to officials within a set window after Election Day, as long as they were postmarked by the election. Those ballots are legal to count as long as they arrive by each state's deadline. See which states count postmarked ballots here.

Mail-in ballots: This is a blanket term for any ballot mailed to voters, though the completed forms can be returned by mail, to a dropbox or in person to officials or polling places. In three critical states -- Pennsylvania, Michigan and Wisconsin -- officials weren't able to start processing any of these ballots until Election Day, which led to huge backlogs and slowed down the count. See when states started counting here.

Military ballots: In every election, a lot of votes come in late -- legally -- from Americans who are overseas or located outside their states of residence, including significant numbers of military service members and their families. Read more here.