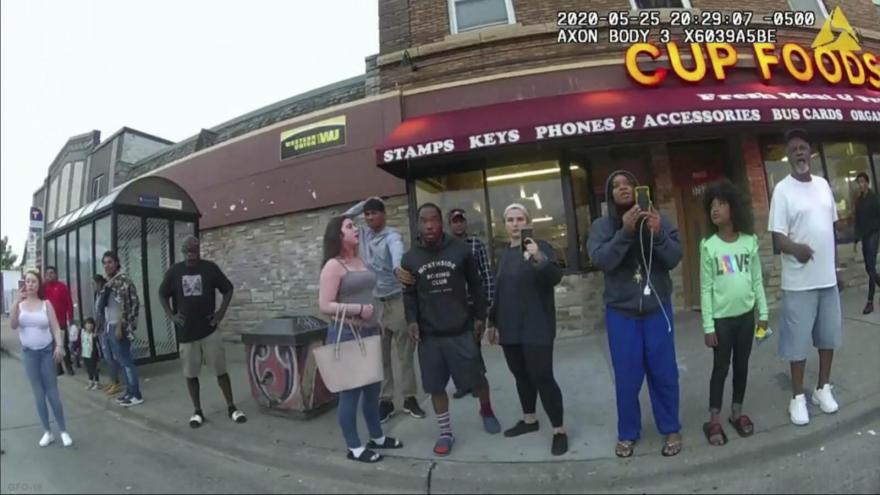 Darnella Frazier, third from right, recorded Chauvin's murder of Floyd next to her 9-year-old cousin.

(CNN) -- If not for Darnella Frazier's quick thinking, Derek Chauvin might still be a Minneapolis police officer.

Instead, Chauvin is behind bars, convicted of two counts of murder and one count of manslaughter after kneeling on George Floyd's neck for more than 9 minutes.

Now the teen who stood firm, capturing the longest and clearest bystander video of George Floyd's final moments, is overcome with emotion and praise after Chauvin's convictions Tuesday.

"I just cried so hard," Frazier posted on Facebook.

Frazier kept filming despite the agony of watching Floyd's life slip away.

"I heard George Floyd saying, 'I can't breathe, please, get off of me' ... and crying for his mom," Frazier testified in court. "He was in pain. It seemed like he knew it was over for him."

Floyd's aunt Angela Harrellson praised Frazier, who was a 17-year-old high school student when she captured the footage that proved to be damning in Chauvin's trial.

"The sad thing is if it hadn't been for that 17-year-old girl Darnella, it would have been another black man that was killed by the police ... and they would have said, 'Oh, it was drugs, oh it was this,'" Harrellson said.

"And we would never have had the story we would have. And wouldn't be here today talking."

"Taking that video, I think many folks know, is maybe the only reason that Derek Chauvin will go to prison," Walz said.

The impact of Frazier's video extended far beyond Chauvin's case. It led to the firing of three other officers at the scene, a ban on police chokeholds and a federal investigation. It also sparked a global racial justice movement.

"With nothing more than a cell phone and sheer guts, Darnella changed the course of history in this country, sparking a bold movement demanding an end to systemic anti-Black racism and violence at the hands of police," wrote Suzanne Nossel, CEO of PEN America, a nonprofit that works to defend and advance freedom of expression.

"Without Darnella's presence of mind and readiness to risk her own safety and wellbeing, we may never have known the truth about George Floyd's murder."

The video shot by a high school student "will go down in history," wrote the NAACP in North Carolina, the state where Floyd was born.

"Like the Abraham Zapruder film of the Assassination of President John Kennedy, the traditional police coverup was impossible," the North Carolina NAACP said in a statement. "No one, not even many of Chauvin's police colleagues, could argue against Ms. Frazier's film."

Oprah Winfrey joined the countless Americans who thanked Frazier and the jury.

"I cried tears of joy when the verdict was read," Winfrey tweeted.

"I'm grateful to the witnesses and their testimonies. Grateful to Darnella Frazier. Grateful to every Juror for seeing and acknowledging what the world saw on that tape. Thank you God for real!"

Frazier, who is now 18, replied to the thousands of people who thanked her on Facebook.

"I can't reply to all of your beautiful comments as I wish to, but THANK YOU all of you," she wrote. "The support I had since day one carried me a long way so thank you again."