The Taliban now control half of Afghanistan's provincial capitals 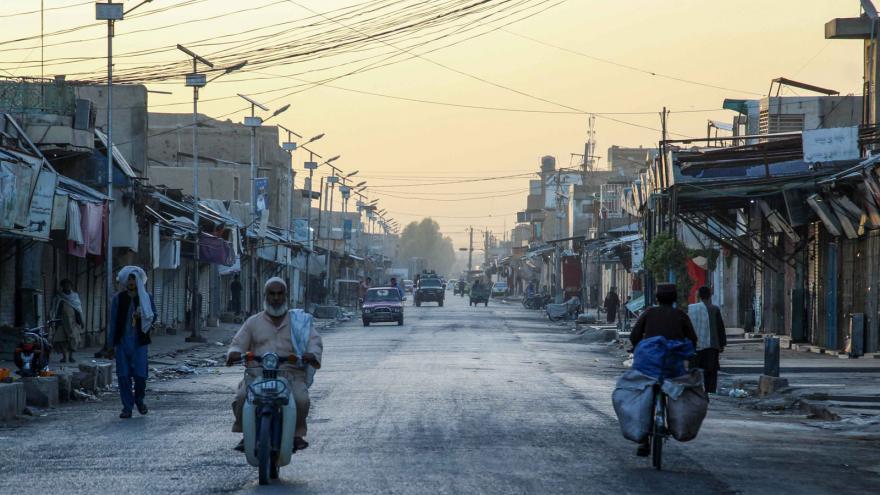 (CNN) -- The Taliban have seized Kandahar, Afghanistan's second-largest city, and a number of other provincial capitals, as the insurgent group accelerates its rapid advance towards the capital Kabul.

Afghan Member of Parliament Gul Ahmad Kamin told CNN on Friday that Kandahar had been taken. The city, which lies in the south of the country, has been besieged by the Taliban for weeks, and many observers consider its fall as the beginning of the end for the country's US-backed government.

Later on Friday the militants took charge of a handful of other cities. According to CNN analysis they now control 17 of Afghanistan's 34 provincial capitals, all of which have been captured in the last week.

The group has made territorial gains in the north of the country, which has traditionally been an anti-Taliban stronghold. And it now controls towns and territories within 100 kilometers (62 miles) of Kabul, including the capital of Logar province, which also fell on Friday.

In a statement Friday, the Taliban said they had taken control of the governor's office, police headquarters, as well as other key operational centers throughout the city of Kandahar. "Hundreds of weapons, vehicles and ammunition were seized," the Taliban statement said.

Kamin said he and many others had made their way to a military base close to the city's international airport and were awaiting a flight out. "Many (government) soldiers surrendered and the rest fled," Kamin said.

Kamin had earlier told CNN that Taliban fighters had been able to break through the city's frontline and were engaging in sporadic confrontation with government forces.

Kandahar, which lies on the junction of three major highways, is of particular strategic importance and was formerly a major hub for US military operations. Its seizure marks the most significant gain yet for the Taliban.

Elsewhere on Friday, the government lost control of the nearby capital of Urozgan province, Tarin Kot.

A local journalist told CNN that the governor's office, police headquarters and the central jail were now in the Taliban's hands. The journalist said the city had fallen to the Taliban without any fighting as tribal elders had decided not to resist their advance.

Afghan news network TOLO quoted the governor of Uruzgan, Mohammad Omar Shizad, as saying that after days of fighting around the city, the elders had urged him to cease fire because of the likely damage of further combat.

The Taliban has not formally claimed to have captured Tarin Kot, and government officials have not confirmed the city has been lost, but videos circulating Friday showed Taliban fighters in the city.

The vast majority of the Taliban's territorial gains have come since the withdrawal of American forces, which began in May and is scheduled to be completed by late August.

A senior administration official familiar with the most recent US intelligence assessment on Afghanistan told CNN Wednesday that Kabul could fall into the hands of the Taliban within 30 to 90 days.

The city of Herat, Afghanistan's third-largest city and a major urban center in western Afghanistan, fell to the Taliban on Thursday evening local time, with the group taking control of the governor's office and Herat police headquarters, according to Afghan officials.

The head of the Herat Provincial Council, Kamran Alizai, said Friday the whole city, except the army corps base, had been seized. Another provincial council member from Herat who did not want to be named said that the Taliban broke into the Herat prison, freeing a large number of inmates.

The city of Ghazni, a key provincial capital on the road to Kabul, also fell to the militant group earlier on Thursday, after "long and intense fighting," according to Nasir Ahmad Faqiri, head of Ghazni provincial council.

Ghazni lies around 93 miles (150 kilometers) south of Kabul, on a major highway connecting the capital with Kandahar.

With the capture of Ghazni, the Taliban is now in control of key locations both to the north and south of Kabul. Their earlier capture of areas of the Baghlan province, which lies to the north of Kabul, raised alarms among US officials because the location is considered essential for the defense of the capital.

A senior official in the Biden administration familiar with one US intelligence assessment said Kabul could be isolated by the Taliban in the next 30 to 60 days, increasing the potential the Afghan capital could soon fall under the control of the militant group.

In response to the Taliban's sweeping advance, the US announced it would deploy 3,000 US troops to Kabul to assist with a "reduction of civilian personnel at the embassy in Kabul" and to "facilitate the processing of" Special Immigrant Visas for Afghan nationals who assisted Americans during their time inside Afghanistan, Pentagon spokesperson John Kirby said.

Two of the infantry battalions headed to Hamid Karzai International Airport in Kabul are US Marines and one is US Army, Kirby said. The Defense Department will also bring in an additional 1,000 personnel from both US Army and US Air Force to help with the visa applicants, Kirby said.

Meanwhile, international concern continues to mount about the civilian toll of the conflict.

On Friday, the United Nations Secretary-General António Guterres called on the Taliban to halt their offensive and to "negotiate in good faith in the interest of Afghanistan and its people."

He added that he hopes that ongoing discussions in Qatar between Afghan representatives and the Taliban "will restore the pathway to a negotiated settlement to the conflict."

Earlier, UN spokesman Stephane Dujarric said that civilians are bearing the brunt of the violence, stressing that "one thing is clear from the country's recent history: durable peace and development will not be achieved militarily."

Dujarric said that from July 1 to August 12, 10,350 internally displaced people have arrived in Kabul.

The UN Refugee Agency said that it is particularly worried about the impact of the conflict on women and girls.

Women and children make up the vast majority (some 80%) of the near 250,000 Afghans who have been forced to flee since the end of May, Dujarric said.

'No time for bureaucracy'

US President Joe Biden is having no second thoughts about his decision to withdraw from Afghanistan -- even as the Taliban have taken ground more rapidly than the US expected.

A White House official told CNN on Friday that while the Biden administration was caught off guard by the speed of the Taliban advance, the presence of sufficient US troops at nearby bases to deploy to Afghanistan this week shows that the administration had planned for all contingencies.

The official stood by the Biden administration's rapid drawdown of forces, noting that "military planners told us that speed equals safety."

"... If we had combat forces in Afghanistan after May 1 without a plan to leave then we would be back in a shooting war with the Taliban," the official said.

The US Embassy in Kabul is instructing personnel to destroy sensitive materials as well as items "which could be misused in propaganda efforts," according to a management notice sent Friday and seen by CNN and described by another source familiar with the matter.

The notice comes as the embassy prepares to withdraw a significant number of diplomats, with one diplomatic source telling CNN that one intelligence assessment indicates that Kabul could be isolated by the Taliban within the week, possibly within the next 72 hours.

On Thursday, the US embassy in Kabul urged US citizens again to depart Afghanistan immediately.

And the gains made by militants overnight added to alarm across the international community. The UK's defence secretary Ben Wallace on Friday said he is "absolutely worried" that al Qaeda "will probably come back" to Afghanistan after the drawdown of US and British troops is complete.

Challenging the US decision to pull out troops, Wallace said: "I've been pretty blunt about it publicly and that's quite a rare thing when it comes to a United States decisions, but strategically it causes a lot of problems."

UK Prime Minister Boris Johnson said on Friday that the UK should not be pursuing a military solution to Afghanistan right now.

The UK should instead "work with all our partners in the region and around the world who share an interest with us in preventing Afghanistan from once again becoming a breeding ground for terror," Johnson said.

The UK has sent 600 troops to the country to help evacuate embassy staff, while German Interior Minister Horst Seehofer also encouraged support staff to leave the "increasingly threatening" situation in the country quickly.

"There is no time for bureaucracy, we must act," Seehofer said in a statement Friday.

Switzerland will also withdraw its three remaining staff in Kabul "as soon as possible" due to the worsening security situation, a spokesperson for the Swiss Federal Department of Foreign Affairs (FDFA) told CNN on Friday.

The United Nations Refugee Agency has meanwhile urged neighboring countries to keep their borders open to people fleeing the Taliban. In Pakistan, into which many Afghans have fled, leaders are calling for an organized international approach to tackle a growing refugee crisis.

Speaking at a press briefing on Friday, Moeed Yusuf, the national security adviser to the prime minister of Pakistan, rejected criticisms that his country is not taking in enough refugees and asked: "Who's going to put money behind it ... where are the people going to be displaced and who is going to be taking the lead?"