The Taliban has been in charge of Kabul for 48 hours; women have already disappeared from the streets 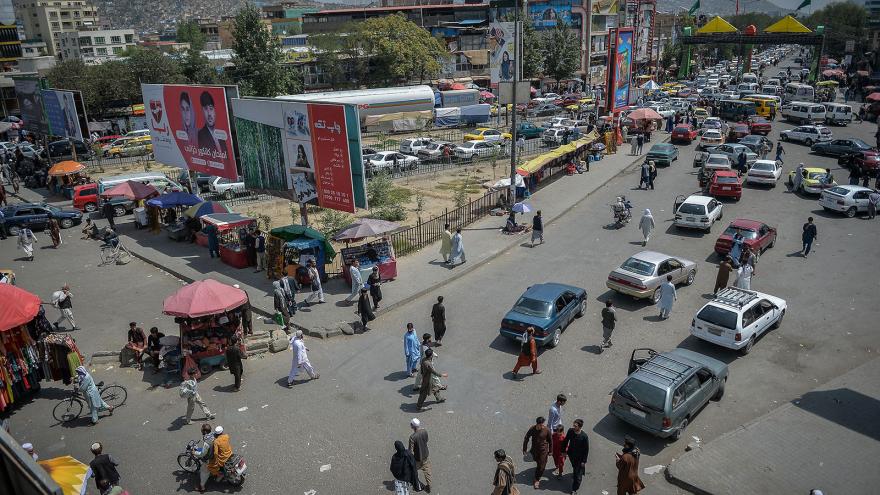 (CNN) -- The busy Kabul street looks almost as if nothing has changed. People rush by, as shopkeepers arrange their colorful merchandise, and police direct traffic.

There's one big change, though: There are almost no women here. Since the Taliban took over the Afghan capital on Sunday, women have largely stayed indoors.

The Taliban has repeatedly said that women's rights will be protected under their rule, but it is clear that many Afghan women are terrified by the prospect of life under the Taliban.

Far fewer women are venturing out into the streets now, compared to just a few days ago. Those who do brave the outside world tend to be dressed more conservatively than before, their faces often covered with niqabs, or veils.

Many of the educated, fearless women who spent the last decade building their careers are desperately looking for a way out, worried they may be targeted by the Taliban.

"I'm thinking about my future, my daughters, what will happened to them if they kill me -- two daughters without a mother," one woman told CNN.

The woman, who CNN is not naming for security reasons, has worked for a number of international NGOs. She said she has spent days desperately pleading with them for help, but none has responded.

"It is not easy ... having more than 10 years experience of working with international [organizations] and not one of them helped me," she said.

The fear is all encompassing

For one clothing store in central Kabul, the Taliban takeover has meant a boost for business; Its owner told CNN he has sold many burqas in recent days.

The garment covers the body from head to toe, with a mesh panel over the eyes. It was mandatory attire for women when the Taliban last ruled in Afghanistan in the 1990s.

Burqas became a far less common sight in Kabul over the past two decades, but the news that the Taliban is once again in charge has sparked an increase in sales.

The shopkeeper said his customers -- largely men -- are frightened and are buying them for their wives, daughters and other women in their lives because they feel that from now on, wearing a burqa may be the only way for them to stay safe on the streets.

This is the tense reality of life in Kabul now.

For now, the Taliban is insisting that life should go on as normal, telling government workers to come back to work.

The group's leaders insist that there is no danger to the "property, honor and life" of Afghan citizens, and they have told their fighters not to enter people's homes or confiscate their cars.

Promises alone are not enough to assuage people's concerns, however.

The heavily-armed Taliban fighters patrolling Kabul city center may not be imposing harsh rules on people's lives yet, but the fear that this could change at any minute is all encompassing.