The suspect in the Philadelphia standoff has a lengthy criminal history, district attorney says 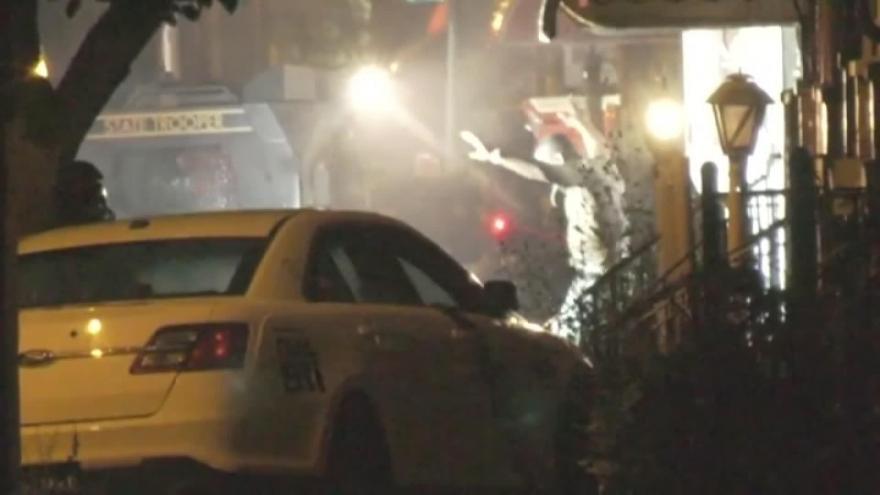 A man who police say shot at officers during a standoff that lasted nearly eight hours in Philadelphia has been identified as Maurice Hill, Philadelphia Police Commissioner Richard Ross told CNN.

(CNN) -- The suspect in a standoff that left six Philadelphia police officers wounded has been identified as Maurice Hill, a 36-year-old with a lengthy criminal history dating back to the early 2000s.

Hill has faced a wide variety of criminal charges over the years, including burglary, aggravated assault, reckless endangerment of another person and gun charges, according to public court records. Many did not result in a conviction.

Authorities say Hill shot at police officers trying to serve a narcotics warrant at a row house in the Nicetown-Tioga neighborhood on Wednesday afternoon.

As the officers moved toward the kitchen area inside the home, a man opened fire, forcing some officers to escape through the window, authorities said. Two officers and three others were trapped inside the house when the shooting began, but were evacuated by SWAT officers after nightfall.

Ultimately, six officers were wounded in the ordeal. The suspect was arrested shortly after midnight, nearly eight hours after he first opened fire.

Here's what we know about the suspect.

He has an extensive rap sheet

Hill "spent most of his adult life bouncing in and out of the criminal justice system," US Attorney for the Eastern District of Pennsylvania William M. McSwain said in a Thursday afternoon news conference.

Public court records show Hill had numerous brushes with the law dating back to at least 2001, when he turned 18.

"I think it's clear this man should not have been on the streets," District Attorney Larry Krasner said. The charges against Hill date from before Krasner took office in January 2018.

In 2008, Hill was indicted in federal court in Pennsylvania for the illegal possession of a Smith & Wesson .357 caliber revolver, seven live rounds of ammunition and a fully loaded Taurus PT .45 semi-automatic that he purchased in another state, records show.

He pleaded guilty and was sentenced to 55 months in prison, plus three years of supervised release for felony possession of a firearm by a convicted felon, records state.

On the state level, Hill has faced numerous charges that were either negotiated down in plea deals or dropped, including kidnapping and assault when he was 19.

A slew of charges Hill faced in a 2007 incident included attempted murder, aggravated assault and illegal firearms possession. But he ultimately pleaded guilty to one count of aggravated assault, according to court records.

On multiple occasions he was charged with intent to manufacture and distribute narcotics and narcotics possession. Hill pleaded guilty to a DUI in 2007.

He was slated to appear in court next week for a probation or parole hearing, according to Kasner.

He video chatted with his girlfriend, spoke to the DA and police commissioner

The suspect was in contact with his girlfriend via video chat at one point during the incident, Philadelphia Police Commissioner Richard Ross said in a Thursday morning news conference.

It's unclear how officers knew about the chat between Hill and his girlfriend. But negotiators then used information about the girlfriend and the suspect's newborn as leverage to "appeal to him and his sense of reasoning," Ross said.

But his girlfriend wasn't the only person the suspect spoke to. According to the district attorney, he, the police commissioner and Hill's former attorney spoke with the suspect to bring the standoff to a peaceful end.

Krasner said he received a phone call shortly after 9 p.m. from a local defense attorney named Shaka Johnson, who told CNN affiliate KYW he represented Hill in a prior case.

Johnson told the district attorney he was in touch with the suspect, who was "expressing concerns that he might be killed if he came out and he had concerns about what would happen to him when he came out, including the future in terms of any possible case," Krasner said.

This led to a four-way phone call between the district attorney, the police commissioner, the suspect and Johnson, Krasner said. Hill seemed to be "very animated, excited" and in a "dangerous state," Krasner said.

Later in the evening, Johnson told the district attorney that Hill wanted to "in some fashion" see Johnson and Krasner before leaving the house. Both went to the scene, but the police commissioner kept them off the block.

Police ultimately used tear gas to force the suspect out of the house.

Charges have not been formally filed against Hill, Krasner said, and the investigation is ongoing. But the district attorney offered a wide range of "obvious" potential charges the suspect could face.

Hill could also face drug charges, depending on how the investigation plays out, he said.

"But an awful lot of these details are not available to us now," Krasner said.

"I will say, there will be a lot of charges," he added. "These are more than enough charges so that Mr. Maurice Hill may never exit jail."