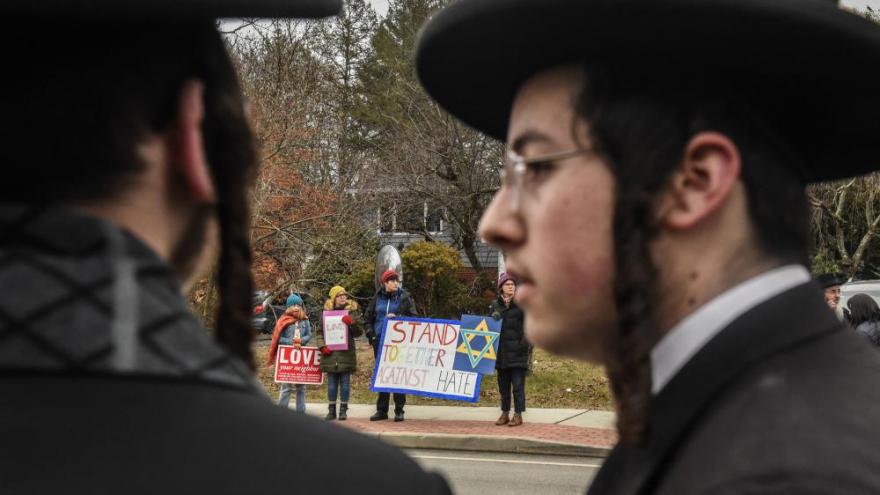 (CNN) -- The man accused of using a machete to wound five people at a Hanukkah celebration now faces hate crime charges after authorities discovered anti-Semitic journal entries in his home.

Grafton Thomas had already pleaded not guilty to five counts of attempted murder after the Saturday night attack in Monsey, New York.

But on Monday, federal authorities also charged Thomas with obstruction of free exercise of religious beliefs involving an attempt to kill. He appeared in federal court Monday afternoon and a judge ordered him to be detained.

One entry said "Hebrew Israelites" took from the "powerful ppl (ebinoid Israelites)" and questioned "why ppl mourned for anti-Semitism when there is Semitic genocide."

The criminal complaint said "ebinoid Israelites" appears to be a reference to the "Black Hebrew Israelite" movement.

The journal also referred to "Adolf Hitler" and "Nazi Culture" on the same page as drawings of a Star of David and a Swastika, according to the complaint.

The internet search history from a cell phone found in Thomas' car included searches such as "Why did Hitler hate the Jews" and "German Jewish Temples near me."

The searches also included the phrase "Prominent companies founded by Jews in America."

On Saturday -- the day of the attack -- the search history showed an article called "New York City Increases Police Presence in Jewish Neighborhoods After Possible Anti-Semitic Attacks. Here's What To Know."

Saturday's was the latest in a long series of attacks against Jewish New Yorkers. Recent violence has prompted new hate crime education in some schools and heightened security in Jewish neighborhoods in Brooklyn and across the state.

Suspect's family: He has no history of anti-Semitism

In a Monday court hearing in White Plains, New York, the federal public defender for Thomas told the judge that Thomas was taking medications and has "issues with bipolar and schizophrenia."

Thomas' relatives said he has a "long history of mental illness and hospitalizations," according to a statement released by Thomas' attorney Michael H. Sussman.

"He has no known history of anti-Semitism and was raised in a home which embraced and respected all religions and races," the statement said.

In a news conference Monday, Sussman said papers from his client show the "ramblings of a disturbed individual."

"There is no suggestion any of those ramblings and pages of writing of an anti-Semitic motive, of any anti-Semitism," the attorney said.

Sussman said his client has been treated in mental health facilities.

"I won't right now comment on the nature and quality of that treatment," he said.

"But it may be that he was noncompliant with medications ... prescribed to deal with his severe depression and other manifestations of psychosis."

One witness hit the attacker in the face with a table

Thomas entered the home and declared to the dozens of people there, "no one is leaving," before attacking the people with an 18-inch machete, federal prosecutors said in a news release.

Witnesses at the scene said the assailant wielded a huge knife -- one person said it was like "a broomstick" -- and stabbed people indiscriminately.

Josef Gluck initially ran away from the danger, then came back to help others. He said the rabbi's home was filled with dozens of people, ranging from 2 months old to 80 years old.

Realizing the attacker's rampage wasn't over, Gluck said he grabbed a coffee table, went after the assailant and "hit him in his face."

Eventually, the assailant decided to leave. Gluck noted the suspect's license plate number and reported it to authorities, who found Thomas about an hour later in Harlem.

Thomas pleaded not guilty to five counts of attempted murder and one count of first-degree burglary. His bail was set at $5 million.

If released on bond, Thomas must forfeit any firearms he owns and stay away from the victims and the rabbi's home, a judge ruled.

One of the victims was critically injured

One of them was the rabbi's son, who is recovering.

According to the criminal complaint, one victim was in critical condition with a skull fracture.

The condition of the fifth victim was not immediately clear.

Rockland County, where the attack took place, has the largest Jewish population per capita of any US county, according to New York. Almost one-third of its population is Jewish.

The armed security will include off-duty or retired law enforcement agents.

Brosnan Risk CEO Patrick Brosnan, who said he lives close to the area, said his company is "volunteering our services around the clock."

Day said he welcomed the public-private collaboration in trying to stop future attacks. "We are fighting back as a community," the county leader said.