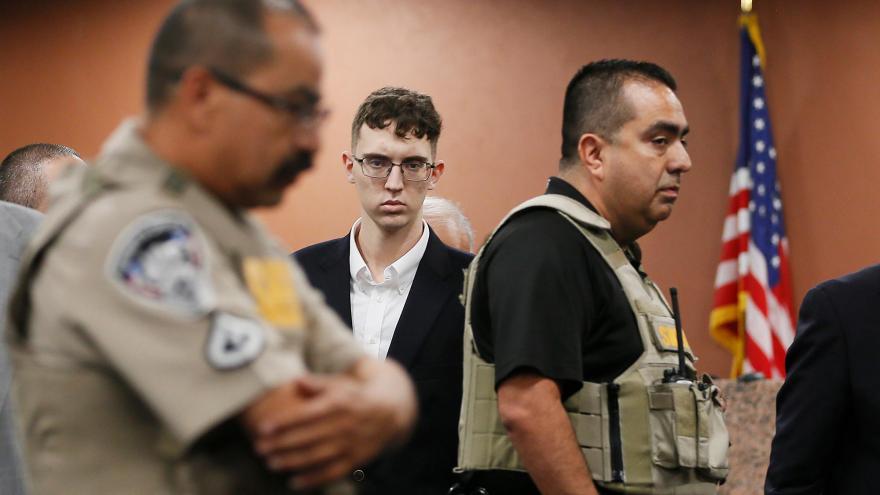 (CNN) -- The man accused of killing 22 people and injuring nearly two dozen more in a mass shooting at a Walmart store in El Paso, Texas, has been indicted on 90 federal charges, including hate crimes, court documents show.

The charges relate to the 22 people who were killed as well as 23 other victims who survived the August 3 massacre -- one of the nation's deadliest shootings and the deadliest attack on Latinos in modern US history.

CNN has reached out to Crusius' attorneys for comment.

Crusius is accused of killing and harming the victims "because of the actual and perceived national origin of any person," the indictment states.

US Attorney John F. Bash told reporters the indictment was a "significant step" toward seeking swift and certain justice for the victims and said it was "tremendously important" to citizens of the United States and Mexico.

The alleged shooter is expected to make his first appearance in federal court on February 12.

Federal prosecutors said he could face death penalty on each of the charges linked to the people who were killed and up to life in prison for the charges involving the surviving victims.

Shortly after the shooting, federal authorities said they were treating the case as domestic terrorism but have not filed any charges against the alleged shooter until now. Since a person can't be charged with domestic terrorism, law enforcement officials such as the FBI have to find related crimes such as murder, illegal weapons possession and hate crimes in order to arrest and charge suspects.

Eric Dreiband, assistant attorney general for the Civil Rights Division of the Department of Justice, said Thursday the alleged shooter tried to terrorize an entire community and the attack clearly met the federal definition of domestic terrorism.

"This hate crime may be considered an act of domestic terrorism, as have other hate crimes throughout our history, like the violence wrought by white supremacists and the Ku Klux Klan," Dreiband told reporters.

After announcing the charges, Bash noted the DOJ's first mission was to fight the Klan and now the agency is facing a "resurgent threat of violence motivated by race, national origin and other categories."

Suspect pleaded not guilty to capital murder in Texas

Crusius has already pleaded not guilty to a state capital murder charge in the August 3 massacre -- one of the nation's deadliest shootings and the deadliest attack on Latinos in modern US history.

He has been in custody at the El Paso County Detention Facility since his arrest in August and is awaiting trial on the state capital murder charge. Federal prosecutors said they will be trying their case in parallel to the state case.

El Paso County District Attorney Jaime Esparza has said he intends to seek the death penalty. Capital murder is the most serious charge in Texas and prosecutors can use it when a defendant is accused of killing multiple victims.

Authorities say the suspect drove 11 hours from his hometown of Allen, Texas, outside Dallas, to El Paso with the sole intent of killing immigrants and Mexicans in the West Texas border city.

About 20 minutes before the massacre, the suspected shooter is believed to have posted a 2,300-word manifesto, titled "The Inconvenient Truth," in which he employed white supremacist language, stated his opposition to "race mixing" and encouraged immigrants to return to their home countries.

"This attack is a response to the Hispanic invasion of Texas," Crusius wrote, according to the indictment. "They are the instigators, not me. I am simply defending my country from cultural and ethnic replacement brought on by the invasion."

The indictment states Crusius authored the document some time before the shooting, and purchased a GP WASR-10 semiautomatic rifle and 1,000 rounds of hollow-point ammunition online on June 19 of last year.

The announcement of the federal charges comes just a few days after the six-month anniversary of the mass shooting in El Paso. The Cielo Vista Walmart reopened in November after a massive renovation and a large memorial for the victims now stands in the south end of the store's parking lot.

Dozens of survivors continue recovering from severe physical injuries and many still see the bloodshed in the form of vivid nightmares. Numerous "El Paso Strong" banners are still in display through the city and a family put up 22 angels on their Christmas display to honor the victims.