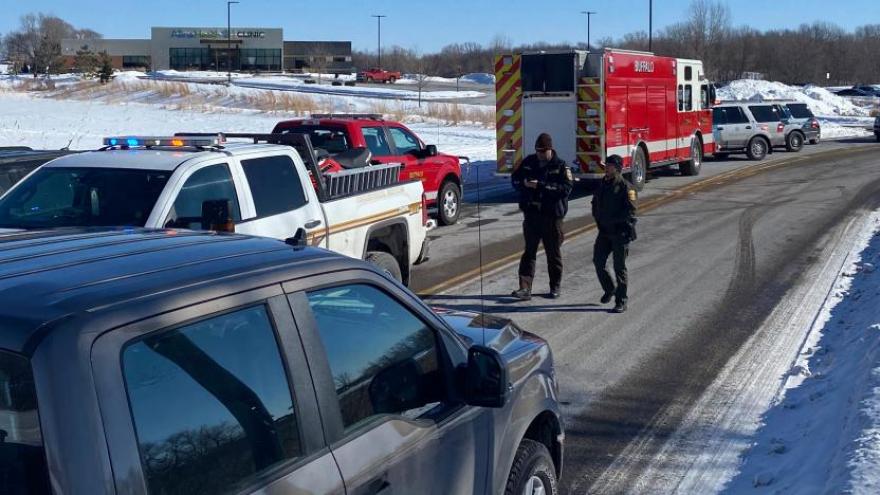 (CNN) -- When police responded to a shooting at a Buffalo, Minnesota, clinic on Tuesday, they found injured victims "screaming for help" and shattered glass from two improvised explosive devices, according to a criminal complaint obtained by CNN.

Court documents describe a chaotic scene as police arrived at the Allina Health Care Clinic where Gregory Ulrich allegedly opened fire and detonated the explosives, killing one person and wounding four others.

"Multiple areas of the clinic were damaged from apparent ammunition rounds and explosions," the complaint says, adding, "An odor of burned gunpowder was present in the clinic" as officers investigated.

Ulrich, 67, faces a charge of second-degree intentional murder, which carries a maximum penalty of 40 years in prison, according to the complaint. He also faces four counts of attempted first-degree premeditated murder, a count of possession of a firearm/pistol in a public place without a permit, and a count of acting with gross disregard for human life or property causing an explosive device or incendiary device to be discharged.

The complaint comes the same day Ulrich appeared virtually in court for the first time. Judge Michele Davis set bail at $10 million without conditions or $5 million with conditions, including that he remain law-abiding, make future court appearances and be GPS monitored, among others. He's being held in the Wright County Jail.

Wright County Attorney Brian Lutes argued in court that Ulrich went to the clinic with a loaded 9 mm semi-automatic handgun and the improvised explosives, "knowing that he was going to shoot that clinic up."

"He went to the clinic knowing that he was going to ignite those bombs," Lutes said. "And that's exactly what he did."

Ulrich was assigned a public defender. His next court appearance is set for the morning of March 22.

According to the complaint, witnesses said Ulrich "pulled out a handgun and began threatening clinic staff," when the staff asked if they could help him.

He soon opened fire in the reception area, the complaint says, striking one victim in the back with a round of 9 mm ammunition. A second victim was shot in the abdomen.

Following the attack, Ulrich called 911 to tell authorities he would surrender, according to prosecutors.

Ulrich had detonated two improvised explosive devices, the complaint alleges, while a third remained unexploded. He did not have a permit to carry the handgun in public, court documents state.

A search warrant at Ulrich's previous home revealed one pound of gunpowder that investigators say is consistent with what was used in the ​improvised explosive devices.

Ulrich told police he took public transportation from the Super 8 motel where he was staying to the clinic, the complaint says.

The criminal complaint against Ulrich alleges he had 49 rounds of ammunition and two marijuana cigarettes when he went on the shooting rampage at the Allina Health clinic.

Suspect had issues with the clinic

Those who knew Ulrich said the suspect was upset that doctors at the Allina Health Care Clinic wouldn't prescribe him pain medication.

There was a large sign on his shed saying "the doctor was a no-good piece of crap" for everyone driving by to see, according to Raymond Zandstra, 65, who said he rented a room from Ulrich.

And his brother told CNN that the suspect frequently referred to his medication.

"He just kept bringing up the pain medication he needed and how they wouldn't give it to him," Richard Ulrich said. "He just seemed obsessed with that. It did concern me, but you know, I didn't think he'd do something like this, especially after all this time."

Richard Ulrich lives in Florida and said he hadn't spoken to his brother in a few months.

The suspect's anger at the health care center was apparent in 2018 when he called to threaten "shooting, blowing things up, and practicing different scenarios of how to get revenge" because he was "angry with the medical community," said a doctor who reported the incident, according to a Buffalo police report obtained by CNN.

He said he "wanted it big and sensational so that it makes an impact," the police report says.

Ulrich has lived in the community "for quite a long time and has had contact with health care within the community during that time," Buffalo Police Chief Pat Budke said.

Though Ulrich had been unhappy with his health care, "there's also, within that history, nothing to indicate that we would've been in the situation that we are at today," Budke said.

In a news conference Thursday, he said that while authorities were aware of past threats by Ulrich, there had been nothing in recent months that would have prompted them to have taken action "to try to circumvent or prevent what happened Tuesday morning."

"If we are going to push blame, I would ask that people push blame where blame is due and that's on a suspect that decided to go into a Buffalo clinic to victimize people that are truly trying to help their communities every day when they go to work," Deringer said.

Medical assistant killed in the attack

All five victims of the shooting were Allina Health employees, the company said.

Overbay was a medical assistant at the facility and had worked for the company since 2018, Allina said. "The loss of Lindsay is traumatic for all who knew and loved her. Our entire Allina Health family extends our deepest sympathies to her family, friends and co-workers," Allina said in a statement.

On Thursday, without naming Overbay, Lutes described the deceased victim as a "mother, a wife, a daughter, a sister" who was lost to "senseless gun violence."

The three victims who are currently hospitalized were all out of critical condition as of Thursday morning, according to a statement from North Memorial Health Hospital. At that time, one patient was in fair condition and two were in good condition, the hospital said. The fourth person was released on Tuesday.

As investigators looked into what happened, the city -- a community of about 16,000 people roughly a 40-mile drive northwest of Minneapolis that Deringer described as tight-knit -- was left to process the bloody incident at a place of care.

Officials for the clinic said the shooting was traumatic.

"Our hearts were broken," Allina Health said in a statement. "The Wright County Sheriff's Office is leading the ongoing investigation, and we are assisting in any way we can. Right now, our focus is on supporting our staff, their families, and our patients."

"As caretakers of victims of gunshots and other violent injuries, nurses and healthcare workers are acutely aware that violence could easily come to the doors of their workplace too," the Minnesota Nurses Association said. "Seeing other workers become victims shakes any hospital worker to their core."

Mayor Teri Lachermeier said that officials would be making phone calls to ensure that the mental health of everyone involved is being cared for and that "we're taking care of those people who are in need of our help."

Deringer pointed to the ongoing Covid-19 pandemic, saying health care workers have been celebrated "probably like no other time in our nation's history."

"They've been on the front line for over a year now, with the pandemic. They know every day when they come to work, they're putting their own personal safety at risk," Deringer said. "None of them ever expected to find the circumstances that they were faced with on Tuesday morning at 10:54 a.m."