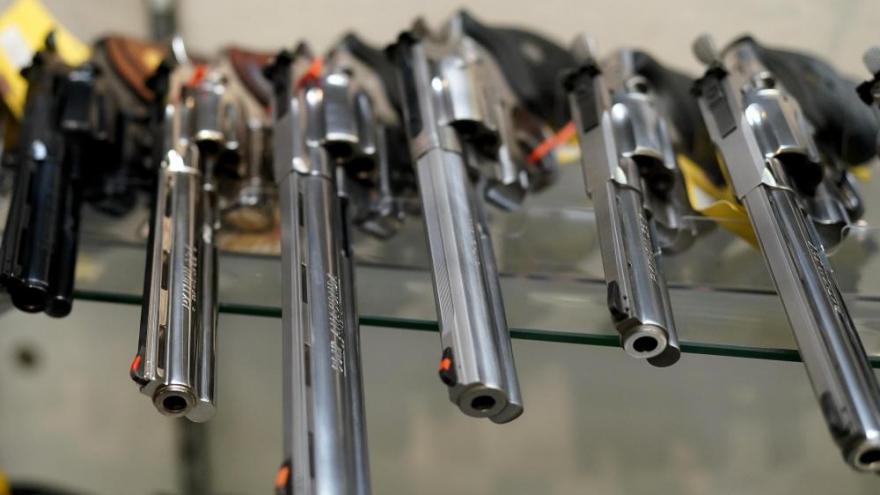 The Supreme Court on Monday announced it would take up a New York case that could give gun owners more freedom. A display of guns for sale is seen at Coliseum Gun Traders Ltd. in Uniondale, New York on September 25, 2020.

(CNN) -- As Americans have been shaken by recent mass shootings and national leaders have renewed calls for firearms reform, the Supreme Court on Monday announced it would take up a New York case that could give gun owners more freedom.

The court said it would decide when states may prevent people from carrying a concealed weapon outside the home for self-defense. This would be the first major Second Amendment ruling in more than a decade.

Conservative justices' interest in expanding Second Amendment protection has been building for years. But they lacked sufficient votes -- at least five of the nine justices -- to follow through on that interest.

This may be the first of several instances that the reconstituted court, with a 6-3 conservative-liberal majority, shows its muscle. Other similarly contentious issues touching on right-wing passions are headed toward the justices, for example, related to abortion rights and racial affirmative action in higher education.

Yet there are additional factors that likely persuaded the justices to agree to hear the New York dispute they accepted on Monday. (The case -- New York State Rifle & Pistol Association v. Corlett -- will be argued in the Supreme Court session that begins next October.) This new controversy tests a New York state law that requires applicants for a license to carry a concealed handgun in public to show they have "proper cause," that is, a special need for self-protection.

Lower federal courts have increasingly divided on the how to interpret the reach of the 2008 Supreme Court ruling that first declared an individual right to firearms, rather than one related to organized state militia. That case, District of Columbia v. Heller, involved gun possession at home for self-defense, and judges have split on when people should be allowed to carry guns outside the home.

Further, Monday's petition was brought by lawyer Paul Clement, a respected former US solicitor general under President George W. Bush who has been at the forefront of challenges to gun regulations for years.

Clement shepherded a separate New York case in 2020 that became moot after the justices had agreed to hear it. The Supreme Court majority ended up dismissing the controversy because New York lifted its ban on transporting guns to firing ranges or second homes outside the city.

Thomas has voiced particular frustration at the high court's avoidance of Second Amendment cases over the years.

"If a lower court treated another right so cavalierly, I have little doubt that this Court would intervene," Thomas wrote in 2018. "But as evidenced by our continued inaction in this area, the 2nd Amendment is a disfavored right in this Court."

Yet, even with such frustration, the four conservatives who wanted to revisit the 2008 Heller case rejected a series of appeals from firearms advocates last summer.

That's because it takes four votes to accept a case but five for a majority ruling. Sources told CNN last summer that the justices on the right did not believe they could count on a fifth vote from Chief Justice John Roberts, a conservative who has voted with justices on the left in certain contentious cases.

Roberts was in the majority for the justices 5-4 milestone ruling in Heller, which established individual gun rights. But the chief justice's signals during internal deliberations on firearms restrictions, sources told CNN, convinced his conservative brethren he would not likely cast a critical fifth vote to overturn gun regulations.

In mid-June, the court rejected several challenges to state laws limiting the availability of guns and when they can be carried in public.

Barrett's firearms record as a judge on the Chicago-based US appellate court appears more in line with Thomas and the other conservatives. A former law clerk to the late Justice Antonin Scalia, who wrote the Heller landmark, Barrett has warned against treating "the Second Amendment as a second-class right."

In his petition, their lawyer Clement urged the justices to clarify when government may prohibit law-abiding citizens from carrying handguns outside the home for self-defense.

Clement said several regional US appeals courts have used the 2008 ruling on handguns in the home to uphold strict permitting regimes, while others have ruled that Heller's principles demand more lenient permitting for eligible citizens.

"This conflict is ... is not going away," Clement argued in his written filings, "and this case presents an ideal opportunity to resolve it. The decision below (in the New York dispute) is also manifestly wrong. In District of Columbia v. Heller, this Court made clear that the "core lawful purpose" of the Second Amendment is 'self-defense.' The need to defend oneself is hardly limited to the home; that is why the framers enshrined a right not only to 'keep' arms, but also to 'bear' them."

The Second Amendment dictates: "A well regulated Militia, being necessary to the security of a free State, the right of the people to keep and bear Arms, shall not be infringed." Until the ruling in the 2008 Heller case, federal judges generally regarded the Second Amendment as covering state militia, such as National Guards, rather than shielding individual rights.

Scalia, joined by four other conservatives, altered that view based on their interpretation that the 18th century Framers of the amendment understood the right to bear arms to cover private citizens.

Yet, as he crafted an opinion the majority would sign, Scalia added caveats.

"Like most rights, the right secured by the Second Amendment is not unlimited," he wrote, adding that tradition showed that "the right was not a right to keep and carry any weapon whatsoever in any manner whatsoever and for whatever purpose."

Scalia suggested some prohibitions on carrying concealed weapons could be upheld, as well as longstanding bans on the possession of firearms by felons and the mentally ill and laws forbidding firearms in schools and government buildings.

Lower court judges have clashed in their interpretations of how far such exceptions go.

But no court, New York Attorney General Letitia James said as she urged the justices not to intervene in the new case, has upheld "a blanket prohibition on ordinary, law-abiding persons carrying firearms outside the home."

She also contended the appellate court's decision affirming New York's longstanding licensing law was correct. "The law is consistent with the historical scope of the Second Amendment and directly advances New York's compelling interests in public safety and crime prevention," she said.

Clement countered that the strict licensing laws essentially amount to prohibitions and insisted more fundamentally that judges are divided over the extent to which the right to bear arms even applies beyond the home.

The greatest consensus among lower courts, he argued, is that they need guidance from the Supreme Court.

And echoing a phrase from newest Barrett, Clement added: "Until this Court reinforces its precedents, lower courts will continue to treat the right to bear arms as a second-class right."