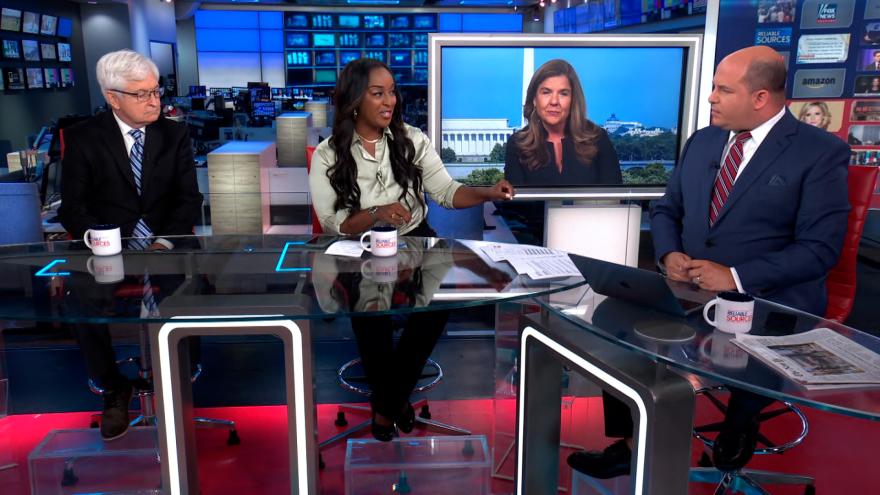 (CNN) -- The attorney general of the state of Ohio couldn't match the job of a local reporter who confirmed the case of a 10-year-old rape victim who traveled from Ohio to Indiana to receive an abortion, CNN analyst Bill Carter said on "Reliable Sources" Sunday.

"There is not a d@!$ scintilla of evidence" AG Dave Yost said in an interview with the USA Today Network Ohio bureau last Tuesday, just one day before the story was confirmed.

In an era of partisan media bias, local reporters are demonstrating the "real journalism skills," such as sifting through court files and speaking to law enforcement, needed to uncover the truth. The journalist, Bethany Bruner from the Columbus Dispatch, was the only reporter in the courtroom the day the rape suspect was arraigned.

Bruner found the court case on the county clerk's website, and in the courtroom, police confirmed the suspect had confessed and that the young victim had gone to Indiana for an abortion, Nicole Carroll, president of Gannett's News Division and editor in chief of USA Today said.

Earlier this month, the Indianapolis Starquoted Dr. Caitlin Bernard, an Indianapolis obstetrician-gynecologist, who said a 10-year-old rape victim was pregnant. And because Ohio has outlawed abortion after six weeks, the girl was brought to Indiana to end the pregnancy.

Some right-wing media personalities flatly portrayed the story as a hoax — until Bruner found that a suspect had been arrested and confessed to the crime.

The series of events underscores the importance of local news, Carroll said.

CNN political analyst Natasha Alfred said the case is a clear example of the effects of partisan media behavior, which has led many Americans to expect their news source of choice to confirm what they already believe.

"What was terrifying is that people went on television and they cast doubt on the story without even making the effort to find out the facts," Alfred said.

Abortion is a medical matter, but when doctors share stories with reporters, the accounts are secondhand and details can be hard to confirm. Patient privacy is also paramount, and many rape victims don't want to subject themselves to the media glare.

The Indiana attorney general was hit with a cease and desist order Friday for the allegedly "false and defamatory" statements he made about the doctor who performed the abortion on the 10-year-old. AG Todd Rokita said authorities are investigating Bernard for potential failure to report the abortion and child abuse, even though documents show she had reported the case.

It can be challenging for healthcare providers to speak out in this media landscape as well.

Fox's Jesse Watters posted Bernard's face on his show, suggesting she may have been part of a coverup.

"(Healthcare workers) were very scared that they could be the next physician with their picture on national news, being threatened by an attorney general," Dr. Tracey Wilkinson, who wrote a guest essay for the New York Times that was intended to be co-written with Bernard, said. "And that is very chilling."

Wilkinson said she'd like to see media coverage focus on the broader landscape of abortion access. She's a pediatrician, not an abortion provider, but is still nervous practicing medicine in Indiana.

"Unfortunately, it's not uncommon, which is where focusing on this one story is the problem," Wilkinson said. "I wish the focus had been not just one patient, but on the many, many patients that struggle to access abortion every single day, long before the Supreme Court hearing decision happened."