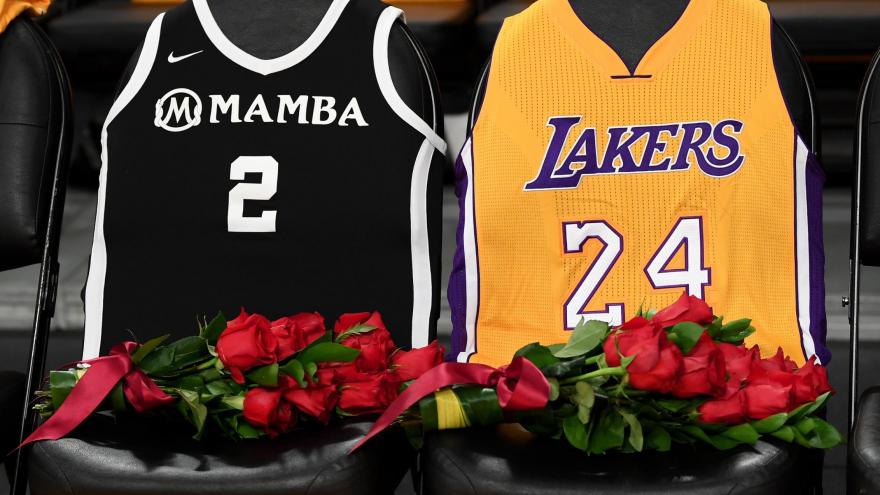 (CNN) -- When thousands of fans pour into Staples Center on Friday night for the first Los Angeles Lakers game since Kobe Bryant, one of his daughters and seven others died in a helicopter crash, they will see several tributes to the late NBA legend.

One will be two floor seats with roses on the chairs and jerseys representing Bryant and daughter Gianna, who was an emerging basketball sensation before she was killed.

Other photos of the Staples Center showed seats draped with a yellow T-shirt with either a purple and white No. 8 or No. 24. Bryant wore both numbers playing for the team and the Lakers retired both at the end of his career.

Hours before the game, hundreds of fans were gathering outside the arena, many stopping to sign big white boards with tributes to the five-time NBA champion. A few days ago, there were three; now there are at least 10 boards.

Others paused to drop off mementos at a massive memorial for the nine victims of last Sunday's helicopter crash near Calabasas.

The Lakers tweeted an image of a logo — a circle with the initials KB inside — on the court, just outside the playing area. The circle and letters are in black and the KB is outlined in gold. There is a white star on the K.

On the tweet, the Lakers wrote: "The House That Kobe Built."

In another tweet, the Lakers posted a photo of a No. 28 jersey, currently worn by point guard Quinn Cook, with the logo on the right shoulder.

This will be the Lakers' first game since Bryant died in a helicopter crash Sunday that killed everyone on board, including his daughter Gianna.

The Lakers coach Frank Vogel said Thursday that his team was focusing on getting ready for game ahead of what is likely to be an emotional evening on Friday.

"We're concentrating on the work," he said. "There's therapy in the work. Our whole belief since I got here is that we're just going to put our heads down, roll our sleeves up and grind, and do the job."

The team will make several other undisclosed tributes to the basketball star during the game, which is set to tipoff at 10:30 p.m. ET.