The squirrels 'splooting' all over New York City are just fine, officials say 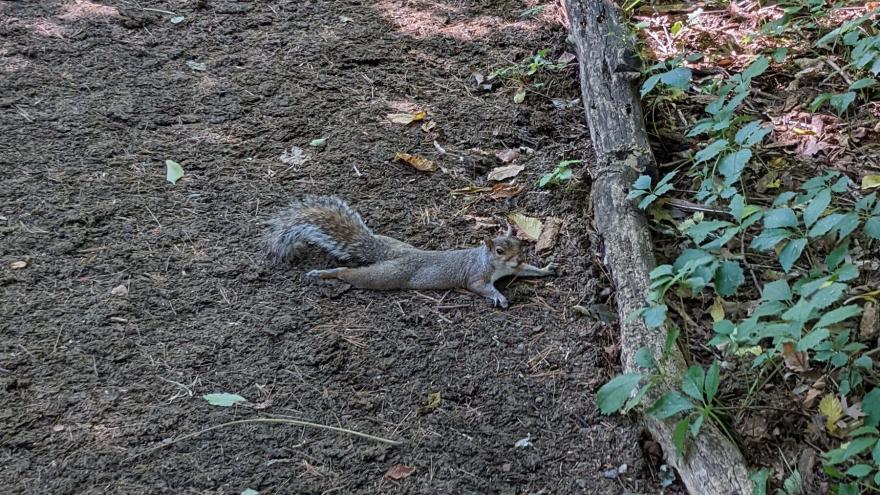 The squirrels 'splooting', meaning squirrel splayed on its belly, all over New York City are just fine, officials say. A photo of a squirrel "splooting," a behavior the animals use to cool off during hot weather.

(CNN) -- If you see a squirrel splayed on its belly, you might be worried for the critter's welfare. But don't worry: It's just "splooting," as officials say -- and it's perfectly healthy.

The term splooting exploded on the internet shortly after the New York City Department of Parks and Recreation posted about the behavior on Twitter.

"If you see a squirrel lying down like this, don't worry; it's just fine," wrote the department on Twitter alongside an image of a squirrel stretching out its limbs. "On hot days, squirrels keep cool by splooting (stretching out) on cool surfaces to reduce body heat. It is sometimes referred to as heat dumping."

Charlotte Devitz, a biologist and PhD student studying squirrel behavior at the University of Minnesota, told CNN that she first noticed squirrels splooting while she was researching squirrels for her master's degree.

"At the time I wasn't really familiar with the term. We just called it 'flop' behavior," she said. "I thought it was super cute. For a long time I tried to find published articles on what this behavior was, but I didn't have a lot of success."

Devitz says that splooting seems more common among larger, hairier squirrel species, like grey squirrels and fox squirrels. This dovetails with the scientific explanation for why squirrels sploot: It helps them cope with the heat, according to Devitz.

The more scientific name for splooting is "heat dumping," Devitz said. "The squirrel is putting as much of their body surface as possible in contact with a cooler surface, frequently on concrete or pavement that's been in the shade."

"We've had quite record-breaking heat this summer, so this behavior has been very, very prominent," she said.

Splooting is a "nice way for them to thermoregulate," especially because squirrels don't lose much body heat by sweating, Devitz said. The behavior, she said, is "also seen in other mammals. It's just gained a lot of visibility because a lot of people see it and become worried when they see squirrels on their belly."

Splooting may be especially common in cities like New York because of the way urban areas trap heat, Devitz says.

"It's quite possible there's a higher incidence of this type of behavior in squirrels that are in urban areas, just because they're more in need of ways to cool down," she said.

"With climate change," Devitz said, "overall temperatures are rising. We're seeing more of these heat spikes, more drought. I think it's quite possible that this behavior will be more and more prominent and more and more necessary for the squirrel."

Devitz notes that the cooling benefits of splooting are balanced by the possible risks squirrels face from predators. The prone pose "puts them in a somewhat vulnerable position" where they may be endangered by predators, she said.