The spike in gun violence continues, with 2021 on pace to be the worst year in decades 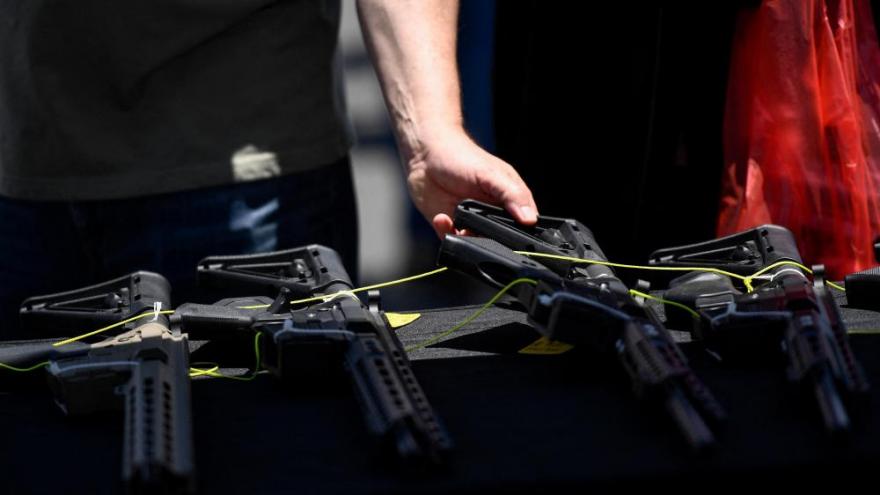 A customer examines a California-compliant AR-15 style rifle displayed for sale at a vendor booth at a gun show in Costa Mesa, California on June 5. So far, 2021 is on pace to be the worst year for gun violence in decades, surpassing even the high levels last year.

(CNN) -- So far, 2021 is on pace to be the worst year for gun violence in decades, surpassing even the high levels last year.

CNN and GVA define a mass shooting as an incident with four or more people killed or wounded by gunfire -- excluding the shooter.

The rapid rise in gun violence, however, might be slowing down. Richard Rosenfeld, a criminology professor at the University of Missouri--St. Louis and his colleagues found that in the first quarter of 2021, the number of homicides was 23% higher than in 2020. In the second quarter that number went down to 10%.

Rosenfeld told CNN that many factors could be playing a role in the rise in gun violence, including the pandemic as well as the racial strife spurred by the murder of George Floyd last year, and the effect both have had on policing across the US.

"(I)mmediately after George Floyd was murdered and widespread protests broke out across the country," Rosenfeld said, "that's what we saw in a number of cities -- a very, very large uptick" in homicides.

Rosenfeld said that the pattern is similar to what happened in the wake of the shooting of Michael Brown in 2014 by a police officer in Ferguson, Missouri.

"What we're seeing now is exactly what we saw (seven years) after the Ferguson incident and protests emerged across the country," said Rosenfeld. "We saw a sizable uptick in homicide in the big cities, and that uptick persisted -- depending upon the city -- for a year, sometimes a little more than a year."

As gun violence continues to increase, so too have gun sales and ammunition shortages. Meanwhile, Biden's executive orders focused on expanding regulation on certain types of firearms continue to run through the rule-making process.

Last year, Americans bought a record number of 23 million firearms -- up 65% from 2019, according to Small Arms Analytics (SAAF), a consulting firm based in Greenville, South Carolina. The National Shooting Sports Foundation estimates that among those purchasing guns in 2020, 8.4 million of them were new gun owners.

At the beginning of 2021, gun sales continued to spike, with 2.2 million firearms sold in January, according to SAAF. While gun purchases began to decrease in most of the preceding months compared to 2020 levels, the number of purchases remains higher than previous years.

In August, the year-over-year sale of firearms was down 25% compared to the previous year. However, the number of sales is still far outpacing those "of any year except for 2020," according to SAAF Chief Economist Jurgen Brauer.

Whether over manufacturing disruptions due to Covid-19, the influx of new gun owners, panic purchasing, the increase of hunters or a myriad of other factors, ammunition has been in short supply since 2020. Even police departments have issued warnings for ammo to be reserved.

While Congressional legislation on gun control is nowhere in sight and the issue of gun violence has largely fallen out of the political zeitgeist, Biden's executive actions continue to run through the federal rule-making process.

The public comment period for the ATF's proposed rule, changing the definition of a "firearm" to include unfinished firearms -- ghost guns -- ended on August 19.

The ATF also proposed a rule in June that would significantly regulate pistols that use certain stabilizing braces. The comment period for the proposed rule ended on September 8. The agency is currently reviewing the comments for both proposed rules before writing the final draft of the rule.

While these proposals are sure to encounter significant challenges in the courts, Biden faces other speed bumps on the road to fulfilling his gun control aspirations.

On September 9, the administration removed its choice to lead the ATF, David Chipman, after the candidate faced extremely shaky confirmation prospects in the Senate among members of the GOP, some moderate Democrats and independent Maine Sen. Angus King.