The skeleton of the world's biggest Triceratops goes on sale 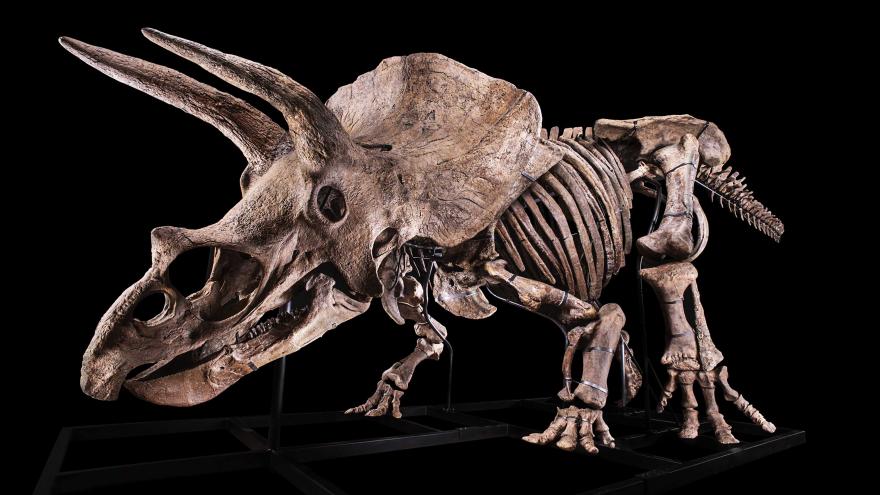 (CNN) -- The skeleton of a 66-million-year-old giant Triceratops fossil could soon belong to a lucky dinosaur enthusiast -- that is, if they have an estimated 1.2 million euros ($1.4 million) to spare.

The specimen, dubbed Big John, has a skull 2.62 meters (8 feet 7 inches) long and 2 meters(6 feet 7 inches)wide, while his two largest horns are 1.1 meters (3 feet 7 inches)long and more than 30 centimeters (11.8 inches) wide at their base, able to withstand 16 tons of pressure, according to auctioneers Binoche et Giquello.

The dinosaur lived in Laramidia, an island continent which stretched from present day Alaska to Mexico, and perished in an ancient flood plain currently known as the Hell Creek formation in South Dakota, where he was discovered by geologist Walter W. Stein Bill in May 2014. The dinosaur was excavated a year later, and later restored in Italy, the company said in a statement.

The creature's remains were preserved in mud, and the skeleton is more than 60% complete and with a 75% complete skull. However, Big John does bear the wounds of a difficult life, with a laceration in his collar from an altercation with a smaller triceratops, which the auctioneers said was due to territorial defense or courtship of a mate.

With three horns, a parrot-like beak and a "frill" that could span nearly 1 meter used to protect the neck or attract a mate, the Triceratops skull is one of the largest and "most striking" of any land animal, according to the UK's Natural History Museum.

At 8 meters, Big John is the biggest Triceratops specimen ever found, the auctioneers said.

The creatures roamed the Earth during the Late Cretaceous period, some 68-66 million years ago in what is now the modern day USA.

This is not the first time a dinosaur skeleton has gone on sale.

The sale of one of the world's most complete Tyrannosaurus rex skeletons smashed auction estimateslast year, when it sold for $31.8 million, setting a new world record for any dinosaur skeleton or fossil ever sold at auction.

However, such sales have raised concerns from paleontologists in the past. In September last year, the Society of Vertebrate Paleontology (SVP), which represents more than 2,000 professionals and students, wrote to Christie's auction house about Tyrannosaurus rex skeleton Stan going under the hammer.

The SVP said: "Fossil specimens that are sold into private hands are potentially lost to science." The organization added: "Even if made accessible to scientists, information contained within privately owned specimens and future access cannot be guaranteed, and therefore verification of scientific claims (the essence of scientific progress) cannot be performed."