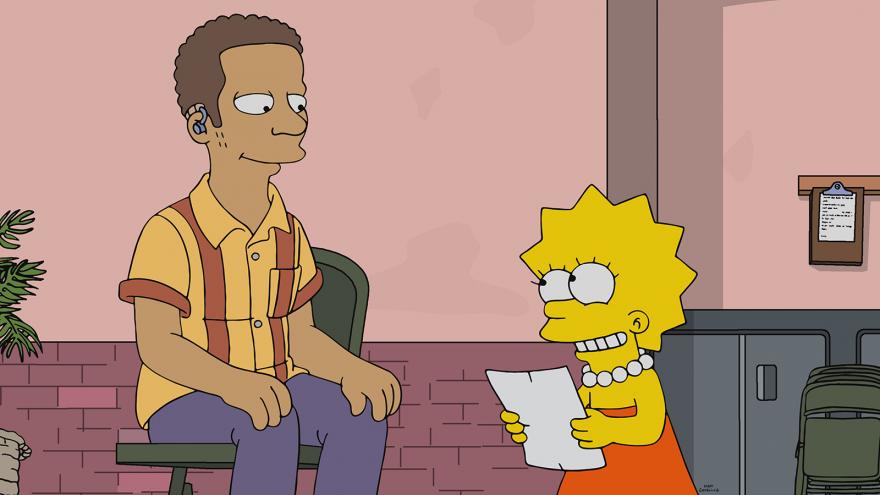 (CNN) -- "The Simpsons" will feature a deaf actor on Sunday for the first time in its 33-year history.

Even though the characters in the show have only four fingers, they'll use American Sign Language in the groundbreaking episode. And no, the episode was not written after "CODA," the movie about the hearing daughter of two deaf parents, won best picture at the Oscars last month.

"It's very hard to do a 'first' after 722 episodes. But I couldn't be more excited about this one," executive producer Al Jean said.

The episode is titled "The Sound of Bleeding Gums." It centers on Lisa Simpson, who finds out that her role model and favorite musician, the late saxophonist Bleeding Gums Murphy, has a son who's deaf and needs a cochlear implant. Lisa gets a little too carried away trying to help the son, Monk Murphy.

The episode's storyline is loosely based on the life of Loni Steele Sosthand, its main writer.

"Loni pitched making the son of Bleeding Gums Murphy a man who was born deaf and could never hear his father's music," Jean told CNN.

Sosthand told CNN that the show's producers consulted two ASL specialists regarding the signs that characters make in the episode. The sign language specialists reviewed animatics -- rough versions of the show's visuals -- to make sure that despite the characters' missing fingers, the meaning of the words was conveyed correctly.

Sosthand said the episode was personal for her and a labor of love. Her brother, Eli, is hearing impaired in a family that loves jazz music.

"Having a brother, who is just a year older, who was born deaf, really shaped who I am as a person. So it is a story not just close to my heart, but to my identity," she said.

"There are many autobiographical themes in the episode regarding the tension between a love of music and loved ones who are deaf -- themes also present in "CODA," but very much from my own life," she added.

Deaf actor John Autry II, whose credits include "Glee" and "No Ordinary Family," plays Monk. In a statement, he called the role "life-changing" for him.

"It's about hard of hearing and hearing characters coming together," he said. "It's a part of history."

The episode will also feature three kids -- Ian Mayorga, Kaylee Arellano and Hazel Lopez -- from No Limits, a nonprofit devoted to deaf children. Watching them record "Happy Talk," a song from the musical "South Pacific" and featured at the end of the episode, was emotional for Sosthand.

The historic episode comes two weeks after "CODA's" big moment at the Academy Awards. CODA stands for Child of Deaf Adults, and the film is about the struggles of a hearing daughter who wants to be a musician instead of joining her deaf parents' fishing business.

The idea for the show was in the works long before the movie, said Jean, the "Simpsons" showrunner.

"Some of it is based on events that occurred many years ago," he said. "Of course, we are very happy for CODA's success."

Jean is looking forward to sharing Sunday's episode with viewers and said he smiles every time he thinks about it.

"I'm a sucker for a happy ending," he said, "though it's not quite the one you expect."