The shooting had barely stopped, but this rabbi needed everyone to know terrorism wouldn't take them down 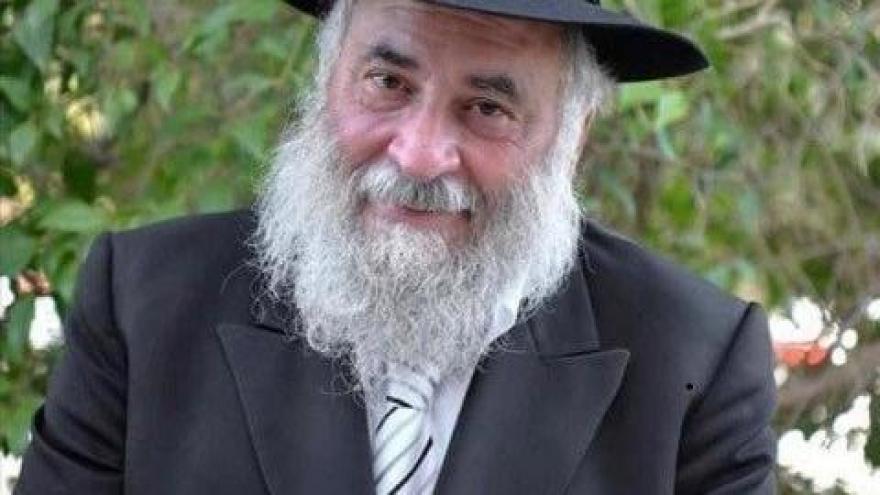 Rabbi Yisroel Goldstein, a victim of the shooting at the Chabad of Poway Synagogue

(CNN) -- Moments after a gunman opened fire in Rabbi Yisroel Goldstein's synagogue, as his friend lay dying in the lobby, he wrapped his arm and bleeding fingers in a prayer shawl, stood on a chair and spoke to his congregation.

"We are a Jewish nation that will stand tall. We will not let anyone or anything take us down. Terrorism like this will not take us down," the rabbi recalled saying, speaking to reporters a day after the shooting at Congregation Chabad.

As he recovered from surgery in the hospital, one of his index fingers blown off by the gunman's rifle, he again had a message he needed to share.

Goldstein, 57, tried to comfort the grieving and wounded even as he struggled to make sense of what happened at the synagogue he had started more than 30 years ago.

"We're not going to be intimidated or deterred. Terror will not win," he told CNN's Brian Stelter by phone Sunday from the hospital. "And as Americans, we can't and won't cower in the face of this senseless hate of what's called anti-Semitism."

"A little bit of light pushes away a lot of darkness. We need a lot of light now," he said. "And this coming Saturday, I personally feel, I want to appeal to all the Jewish people to make an effort to attend synagogue. We need to fill up those rooms, not run away from synagogue but on the contrary, let's fill up the synagogues.

After he was discharged from the hospital, Goldstein thought again of offering words of guidance to his congregation, and to anyone else who was listening.

'The most heart-wrenching sight I could have seen'

Goldstein's congregants clapped as he walked slowly up to the synagogue to address reporters after he was released from the hospital.

Both of his hands were heavily bandaged. One arm was in a sling.

"We love you rabbi," some of them said. "We're so sorry this happened to our synagogue."

When Goldstein was 24 years old, his teacher sent him from Brooklyn to start a synagogue in Poway, California, 22 miles north of San Diego. It was vacant land, the promise of a welcoming and sacred space.

Today, a community center houses the synagogue, a preschool and an organization for special needs children.

"My wife and I, our whole life is about, what can we do for the community. For us to have this happen to us in 2019 is unfathomable," he told CNN earlier in the day.

Speaking to the reporters gathered outside the synagogue, Goldstein recalled how a pop of gunfire interrupted the peace of the last day of Passover, one of holiest days of the year.

He and the congregation were getting ready for a memorial service, he said.

The rabbi said he heard a loud bang as he walked toward the banquet hall to wash his hands.

At first, he thought Lori Kaye, a longtime member who helped the congregation secure the loan for the building, had fallen in the lobby. Maybe a table had tipped over, he thought.

But then the rabbi turned around and saw a terrible sight, he said with emotion in his voice.

The rabbi said he froze. He wondered, where did the noise come from? What happened to Lori?

More shots rang out, Goldstein said, and he lifted his hands up in front of him, managing to shield himself with his fingers.

He rushed into the banquet hall, toward the children who were playing there, including his 4-year-old granddaughter. Bleeding, he screamed, "Get out, get out!"

Then the gunman stopped firing. Police say it's still unclear why, but it's possible the gun malfunctioned; the rabbi said he believes it jammed.

An armed off-duty Border Patrol agent, who had recently started worshiping at the synagogue after discovering his Jewish roots, chased after the shooter, the rabbi said.

"After the shooter left, this terrorist left, I turn around to assess the situation. And I walk into the lobby and see Lori laying on the floor unconscious," he said, stricken with grief.

Kaye's husband tried to give her CPR and passed out next to her. The couple's daughter screamed for her parents.

"This is the most heart-wrenching sight I could have seen," Goldstein said.

The rabbi said he felt like he was frozen in time.

"I grabbed a prayer shawl, wrapped my arm and my fingers with it, that was just hanging, dangling. I'm bleeding all over the place. My congregation was gathered outside here. And I said 'I gotta do something.'"

So he climbed onto the chair and began to speak.

Goldstein said he prayed and cried in the hours after the shooting.

"I pray for the healing during this time, for the pain and grief, and I ask the world to do something to add more light to combat evil darkness," he said.

The rabbi, who is charged with helping his congregation cope with their struggles, seemed to struggle to find a reason why his life was spared.

He was "centimeters away from being shot point blank," he said.

"I have lived through this horror for a reason," he said. "God didn't want me to die yesterday. God wants me to continue on being his emissary and to be a partner."

Goldstein said he has heeded the words of the rabbi and teacher he learned from when he was growing up in Brooklyn.

Quoting his teacher, he encouraged people to carry out random acts of kindness, "to tilt the scale."

"There's so much darkness now in the world, but you and I have the ability to change," he said.

"I will never forget yesterday. My missing finger will forever scar me physically, but it's going to remind me how vulnerable we are, and also how heroic each one of us can be."