The Second Amendment is not about guns -- it's about anti-Blackness, a new book argues 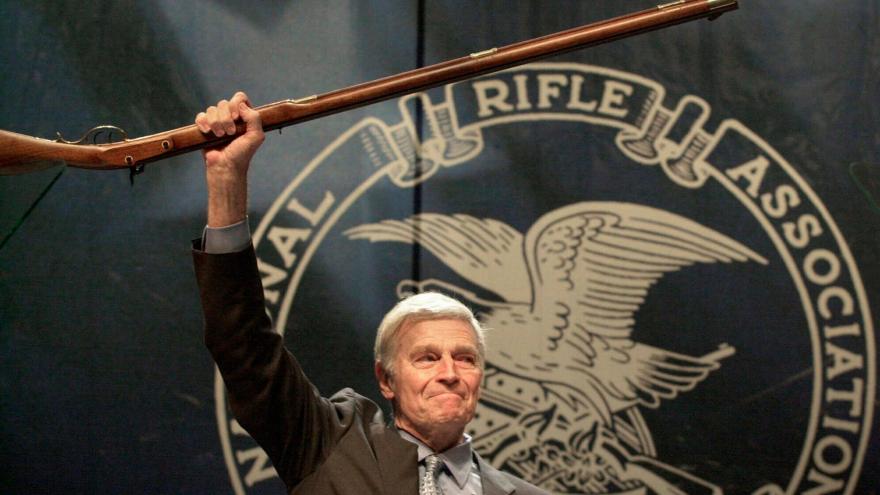 NRA president Charlton Heston holds up a musket at the group's 129th annual conference in May 2000 in Charlotte, North Carolina.

(CNN) -- One of Charlton Heston's greatest performances came not in a Hollywood film but on a convention stage where he electrified a crowd of gun-rights enthusiasts.

Heston was president of the National Rifle Association in May 2000 when he spoke at the group's national gathering in Charlotte. The actor described gun owners as patriots and said owning a gun was "something that gives the most common man the most uncommon of freedoms."

As the crowd cheered, Heston then raised a replica of a Revolutionary War-era flintlock rifle and delivered a warning in his thundering baritone to anyone who would try to take his guns away: "From my cold, dead hands!"

It was a stirring moment because Heston dramatized the belief that an individual's right to own guns is enshrined in the Second Amendment. The amendment declares that a "well-regulated Militia" is necessary for the security of a free state," and that "the right of the people to keep and bear Arms, shall not be infringed." Gun rights supporters say the Founding Fathers created the amendment so that citizens could protect their homes from tyrannical governments abroad and at home.

But while that interpretation may provide great political theater, it's sloppy history, according to a prominent scholar in a provocative new book. In "The Second: Race and Guns in a Fatally Unequal America," Carol Anderson argues that the Second Amendment is not about guns -- it's about anti-Blackness. She says it "was designed and has consistently been constructed to keep African-Americans powerless and vulnerable."

Anderson cites legislative debates from the Founding Fathers and a range of historical records to make some bold points. She says some early lawmakers who supported the Second Amendment were more worried about armed Blacks than British redcoats. She says that even after the Civil War ended, many Southern states banned Black citizens from owning weapons.

And that famous line about a "well-regulated militia?" Well, that was inserted primarily to deal with potential slave revolts -- not to repel a foreign army, she says.

Anderson's book is a fast-moving narrative with plenty of startling statements. She contends that the Second Amendment has never been applied equally to Black citizens. As evidence she cites the 2016 shooting death of Philando Castile, a Black man who was shot to death by a suburban Minneapolis police officer during a traffic stop despite having a license to carry a gun.

Some historians say the fear of slave revolts wasn't the primary reason for the creation of the Second Amendment. Instead, they cite other factors, such as the desire to keep the nation's military in check, because the Founding Fathers were leery of a professional army that could turn on its own citizens.

Anderson's book will add to that discussion, and it arrives at a time when the gun debate is as heated as ever. Mass shootings are now commonplace, and the Supreme Court has announced it will reexamine the scope of the Second Amendment in a new case that some say "could lay waste to many of the nation's laws."

It's not the first time Anderson, chair of the African American Studies department at Emory University, has used the past to illuminate the present. She is the author of "One Vote, No Vote: How Voter Suppression is Destroying Our Democracy," and "White Rage: The Unspoken Truth About Our Racial Divide," which won the National Book Critics Circle Award for criticism.

Anderson spoke recently to CNN. Her answers were edited for brevity and clarity.

I've been told that the Second Amendment was about an individual's right to self-defense and to protect against a tyrannical government. But you say it's also "a bribe placed on Black bodies." What does that mean?

The crafting of the Constitution was of primary concern for folks like James Madison because the Articles of Confederation were not working. And when they went to the Constitutional Convention, the Southern delegates made it really clear that they weren't going to sign off on any kind of Constitution to strengthen the United States of America unless they could get the clear extension on the Atlantic slave trade, the Three-Fifths Clause so they could get more representation than they were due in Congress, and the Fugitive Slave Clause. Those were the bribes. That was the sign-off for the South to sign off on the Constitution.

One of the things that many previous historians have not linked up was the role of the militia in putting down slave revolts, in buttressing slave patrols and keeping enslaved Black people, and free Blacks, under the boot of White supremacy.

Why haven't more historians made this link you talk about?

It's because of several things. The emphasis on the Second Amendment has been crafted as a well-regulated militia in terms of (opposing) a tyrannical government or stopping a foreign invasion, and the individual right to bear arms. That's the way it's been cast in the legal debates. That's driven our historical debates. We've got a weird bifurcation in the scholarship between the history of slavery and the history of the Second Amendment. What I'm doing is saying these things are all happening at the same time. Let's see what's going on. And what actually drew me into this was the killing of Philando Castile.

How did Castile's shooting spark this?

Here was a Black man who was pulled over by police, who followed NRA guidelines in letting the police officer know that he had a license to carry a weapon. And that led to Philando Castile being shot dead. And then the NRA went virtually silent with what I call "non-statement statements" [A NRA spokeswoman eventually called Castile's death a "terrible tragedy that could have been avoided" after the group was criticized for its silence on the shooting.] And then journalists were saying, "Don't Black people have Second Amendment rights?" And I went, "That is a great question." And I went hunting. That was the genesis of this book.

There have been a lot of stories about gun ownership surging among Black people during the pandemic. And maybe you've heard about the growth of some Black militia groups, like one named the "Not F**king Around Coalition." As more Black people embrace the Second Amendment, will they discover that it applies equally to them?

Let's look at it this way. The insurrection that happened at the [US] Capitol, if those have been Black folk... [Anderson lets the question linger without finishing the sentence]. Yeah. Up in Michigan, when the White folks were hollering in the face of security forces, do you think it would have been business as usual if they had been Black?

We have a dual system here. And one of the things that courses through our history is anti-Blackness and that fear of Black people. You heard it in the Derek Chauvin trial, where Chauvin was like [she mimics a body camera video of Chauvin justifying his treatment of George Floyd] well, you know, "He was a sizable fellow." It is the couple out in St. Louis who pulled their guns on Black Lives Matter protesters who were not on their property. It is the way that Dylann Roof was taken alive after killing nine Black people.

What would you say to people who argue the reason the Second Amendment was so important in the 18th and 19th centuries was not so much race but security? If you were a farmer isolated on the frontier, you needed guns to hunt, to protect crops from predators and defend your family.

I would say that access to guns was not blocked for many Whites. One of the first laws passed by Congress, the Uniform Militia Act, required all White men between a certain age range to be part of the militia and own a gun. For me, the Second Amendment really isn't about guns. It is about anti-Blackness. It's not about guns and the access to guns to fend off bears -- what [former Supreme Court] Justice Anthony Kennedy talked about in the Heller decision when they were examining the roots of the Second Amendment. But what we see, too, during the same period is that Black people were denied access to weapons because they were Black. And it wasn't like they didn't have the fend-off threats.

When you heard the Supreme Court will take up another Second Amendment case, what were your first thoughts?

Is that we're going to be in the same traditional loop of, is there an individual right to bear arms or is this about a well-regulated militia? Does the state have the right to control access to arms? And we're not going to deal with the reality that anti-Blackness is really foundational to understanding the Second Amendment. I look at it this way. After Sandy Hook, nothing happened. How could that be? That could be because of this underlying fear that if there are real gun safety laws then Whites will be left defenseless against these Black people.

You probably heard that the Texas legislature recently approved a bill that would allow residents to carry handguns in public without getting a license. If this standard interpretation of the Second Amendment continues, what will this country look like in five to 10 years?

A slaughterhouse. How many mass shootings have we already had? And with the growing diversity of Texas, I'm not surprised.

I read a story that says the US has a gun violence death rate that is nearly 100 times higher than the United Kingdom's. If a visitor from the UK or some other country came here and asked, why is there is so much gun violence in the US and why do so many people have guns, what would you tell them?

Think about the way we depict the "Dirty Harry" movies, right? Or remember that scene in "Raiders of the Lost Ark" where there's a swordsman who is displaying all kinds of incredible swordsmanship in front of Harrison Ford and Ford just pulled out a gun and shoots him. This nation has a history of violence, and in that history, the gun has been used to deal with fear and guilt, and the fear of retribution. That history helps define where we are now.

You've written about White rage and the recent campaign to suppress voting among Black people. And you've written powerfully about how racism is so adaptable and durable. How do you still have hope for this country?

What I also know about this history is that we've always had a large number of people who have fought to make this nation better. It is what we saw in 2020 -- in the midst of a pandemic -- that massive Black voter turnout saying we will not live under an authoritarian regime like Donald Trump's. That was significant.

And of course, we're now dealing with the White rage backlash to that as all of these states are proposing or implementing these new Jim Crow voting regulations. But people aren't sitting down accepting subjugation. That's where the hope is.