The search of the Surfside rubble won't stop until every person is found, official says 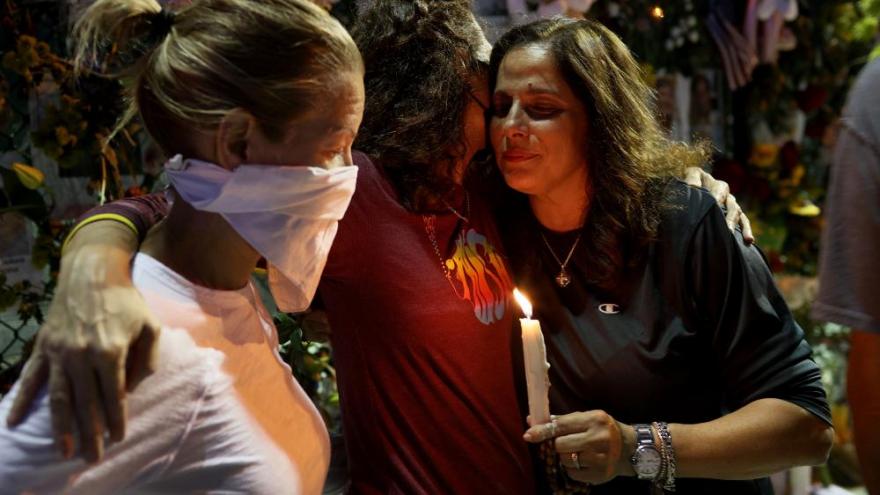 Michelle D'Antuono, Dana Kulvin, and Soraya Batista hug as they visit the memorial that has pictures of some of the victims from the partially collapsed 12-story Champlain Towers South condo building.

(CNN) -- After more than three weeks of searching, crews at the site of a condo collapse in Surfside, Florida, have made great progress -- but the intensity of their work isn't over yet, an official said.

"On the original collapse site we are almost at the bottom," Miami-Dade Police spokesperson Alvaro Zabaleta told CNN. "Does that mean we are almost done with the search? No. Until we clear the entire site and find no more human remains we are not done."

"We are almost there," Zabaleta added.

Since part of the building collapsed in the middle of the night on June 24, crews have recovered 97 bodies from the rubble, identifying 92 victims and notifying 92 families, according to a Thursday news release from the Miami-Dade Mayor's Office.

Moving forward, the county says it will only be reporting the number of victims who have been identified, "out of respect for the families who are still waiting and to ensure we are reporting the most accurate possible numbers."

With more than 22 million pounds of concrete and debris pulled from the site, according to Miami-Dade County, the scene differs greatly from the up to 16 feet of rubble that crews faced I the immediate aftermath.

But the pain the community and victims' families feel remains unchanged.

Flowers, letters, and photos are still being added to the Wall of Hope, a memorial to those who were inside on the gates of the building's tennis court.

"It's almost like a mourning process or a shiva process that goes on and on and on, but yet you didn't have the funeral," Soriya Cohen told CNN affiliate WLPG, as she waited for rescuers to find her husband. "I'm not even 100% sure he is going to be found because they looked in his apartment and they only found his brother."

The site becomes a place of gathering and mourning

The tragedy has affected victims from multiple Latin American countries, including Colombia, Venezuela, Uruguay and Paraguay.

Surfside -- a small, eclectic town of about 6,000 people -- is also home to a large population of Orthodox Jews. Following the collapse when families were reuniting, it was common to hear a mix of conversations in Hebrew, Spanish, English and Portuguese.

The diverse community came together, attempting to grasp for strength in faith. Synagogues and churches opened their arms for emergency prayer services after the collapse. Vigils were held for the missing, and many prayed, sobbed and hugged with the tower's ruins visible in the background.

"It is obvious that this has become more than a collapsed building site. It's a holy site," Surfside Mayor Charles Burkett said earlier this week.

Frantic 911 calls from the first moments of the collapse

Meanwhile, more details have emerged about the immediate moments of the collapse.

The 911 calls during the first moments reveal chaos and confusion among residents and witnesses as the building came down.

"It seems like something underground, everything exploded," one caller told dispatchers, adding that it seemed like an earthquake.

Another caller, who told dispatchers they were in a parking garage, begged for help.

"I know the police are here already. Can somebody help me get out please?" the caller pleaded. "I was able to escape, but I'm outside in the parking lot. If the building comes down, it will come down on my head."

One caller told dispatchers a sister lived in the building, but was confused as to what happened and how people would get rescued.

"I don't know if something happened to it, but half of the building's not there anymore," the caller said. "There's two people, they are, they're alive but it, they can't get out because there's no building on the other side of their apartment."