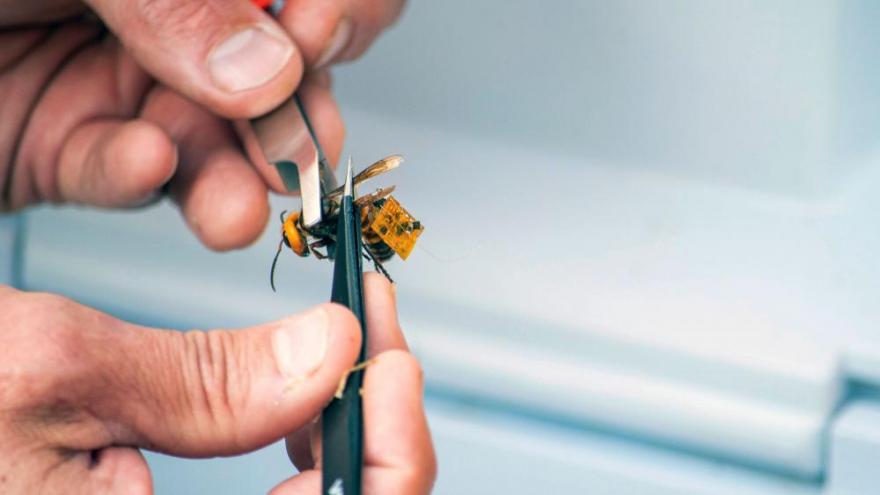 Scientists in Washington state captured a live Asian giant hornet and attempted to tag it with a tracking device so it would lead them to its nest.

(CNN) -- Agriculture officials in Washington state are working to track down and destroy a nest of Asian giant hornets -- more menacingly known as murder hornets -- after several were found recently near the US border with Canada.

There have been six credible sightings of the large invasive hornets in the last week near Blaine, Washington, said Sven Spichiger, an entomologist with the Washington State Department of Agriculture (WSDA).

"We believe, of course, we're dealing with a nest and we will be watching that particular area pretty close," Spichiger told reporters on Friday. "We do hope to have this nest located within a couple of weeks, at the latest, and be talking to you about how we successfully eradicated a nest in the coming weeks."

An entomologist was able to net a live hornet on Wednesday, which was the first live capture of an Asian giant hornet in the United States, WSDA spokeswoman Karla Salp told CNN.

Scientists attempted to attach a tiny tracking device to the hornet in hopes that it would lead them back to its nest, Spichiger said.

Unfortunately, the glue didn't dry fast enough, and the tracker slid off and got glue on the hornet's wings -- making it unable to fly.

He said they had practice new methods of attaching the tags, so they'll be ready when they catch more live hornets.

"We have peppered the area with 30 live traps," Spichiger said. "We're probably going to snag one if not more of them, and we'll be able to give this another try."

They've also put out beehives in the area as bait and are testing a new hive exclusion device that allow the bees to leave freely but traps the larger hornets.

Asian giant hornets are the world's largest species of hornet and can grow up to two inches long, according to the WSDA. They don't typically attack humans or pets, but they will if threatened. Their stingers are longer than that of a honeybee and their venom is more toxic.

Just a few insects can attack and destroy a honeybee hive in just a few hours. They enter what's known as a "slaughter phase" where they decapitate and kill all the bees in a hive and take it over.

Spichiger said the Asian giant hornets are a threat to bees, as well as native wasps and yellow jackets, which are important pollinators. One homeowner was able to get a photo of a hornet attacking a paper wasp nest in the eaves of his roof.

Fifteen of the hornets have been found in Washington since they were first discovered in the state in 2019.

Officials are urging anyone who sees an Asian giant hornet to resist the urge to kill it. Instead, they'd like people to let them know when they saw it and what direction it was flying to help them narrow down the location of the nest.

"There's a couple of extremely wooded areas surrounding this neighborhood and it may be a very daunting task to find the exact location," Spichiger said.