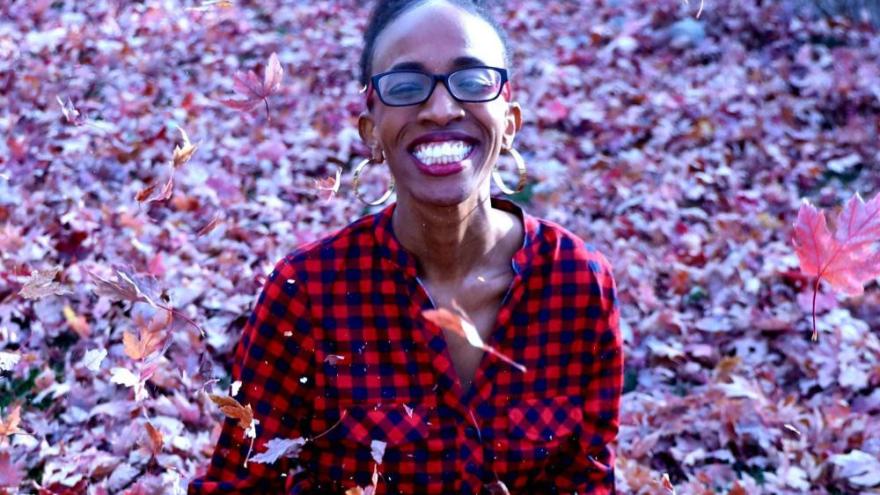 Irene Gakwa was last seen by her family during a video call on February 24 and was reported missing in late March. She was 32 at the time.

But she's not a physician making house calls. She's part of a team of women in Gillette, Wyoming, who are devoting much of their time looking for clues in the case of a missing woman they have never met.

Irene Gakwa was last seen by her family during a video call on February 24 and was reported missing in late March. She was 32 at the time. The Kenyan immigrant lived in Gillette with her boyfriend, Nathan Hightman, who is considered a person of interest in her disappearance. He's separately charged with five felonies for allegedly transferring money from her bank account, changing her online banking password, maxing out her credit card and deleting her email account after she vanished.

Wearing T-shirts with the words, "Where's Irene?" and "Team Irene," the women have logged hundreds of miles in their cars, scouring the vast high plains of Campbell County for anything that might help solve the mystery.

Last weekend, their search included about two dozen people, 10 horses and ATVs donated by local residents to help them explore the area from a higher vantage point.

A big focus of their search is a 55-gallon metal drum that Gillette police say may be connected to the case.

"We believe that barrel is a key part of the investigation," Koester said.

The drum 'is an item of interest,' police say

In a May statement, Gillette police said they are "requesting information regarding the possibility of a 55-gallon metal drum, which may have been burned and/or abandoned within the county."

Police have declined to say why they're seeking details about the drum or what role it may have played in Gakwa's disappearance.

But Gakwa's oldest brother, Kennedy Wainaina, said Gillette police told the family that a neighbor reported seeing what appeared to be a fire burning in a drum in Hightman's backyard between late February and March.

In a statement to CNN, Dan Stroup, the lead detective in the case, declined to share additional details on the drum or Wainaina's assertion.

"I am not able to provide any comment on the barrel other than it is an item of interest that we would like to examine as part of this investigation," he said.

CNN has left messages via text and email with two neighbors of Hightman's but has not received a response. CNN also reached out to Hightman for comment but has not heard back.

Koester and others are now combing the area for the drum, although their search is complicated by the fact that northeastern Wyoming is full of oil and natural gas fields, and by default, oil drums. Many of them are on private property that can't be accessed without the owners' permission.

Investigators have said they're following various leads in Gakwa's disappearance, including a cryptic one "indicating that Irene may have been taken to a rural area, mine site or oil and gas location ... in a passenger vehicle or crossover SUV," according to a statement released in April.

Gillette police say they are seeking information on a gray or silver-colored Subaru Crosstrek with Idaho license plates that may have trespassed on private property, possibly in a rural area, between February 24 and March 20.

The car is registered to Hightman, Stroup told CNN. He declined to provide additional details.

"This is still a very active investigation," Stroup said. "Please rest assured our team is working diligently to resolve this case."

A group of women in Gillette lead frequent searches

Koester and her search co-organizer, Heidi Kennedy, are on a mission to find out what happened to Gakwa.

Born and raised in Kenya, Gakwa moved to Idaho in May 2019, hoping to launch a career in health care. A petite woman, she is just over 5 feet tall and weighs about 90 pounds.

She moved to Gillette in the summer of 2021, but the local volunteers involved in the search did not know her. "She's a member of our community," Kennedy said. "We have to keep looking."

Gakwa's two brothers live in a suburb of Boise, Idaho, while her parents are in Kenya. So Koester and Kennedy have assumed leadership of local, grassroots efforts to find answers.

Their efforts have become a lifeline for a family that's trying to remain hopeful, yet fearing the worst.

"These women, I have no words to explain how they've helped our family, " Wainaina said. "They have become our family in Gillette, they are our feet on the ground. They've kept us updated on everything happening with the searches. We have tried to give them money to pay for some of the expenses in the search, but they've said no."

Koester and Kennedy have galvanized a group of mostly local women for Saturday searches around the Gillette area several times a month. Sometimes, a dozen people show up. Other days, about two dozen. Wainaina and other members of the Kenyan community in greater Boise sometimes make the 12-hour drive to join them.

In recent weeks, the searchers have rummaged through trash bags, peered into garbage containers and trudged through drainage tunnels.

"Sometimes I worry that the one thing we overlook is what will have answers," Koester said.

They have vowed to turn over anything suspicious to the Gillette Police Department.

They're also focusing attention on Hightman

Hightman, 39, has pleaded not guilty to the financial charges and is scheduled to go on trial in December.

He is considered a person of interest in her disappearance and has "not made himself available to detectives looking to resolve questions that exist in the investigation," Gillette police said in a statement.

'We believe he has information pertaining to the disappearance of Irene, but he has elected not to provide that information to law enforcement at this time," Stroup said.

Hightman told investigators he last saw Gakwa in late February, when she came home one night, packed her clothing in two plastic bags and left in a dark-colored SUV, according to the affidavit of probable cause. He told police he hadn't heard from her since.

CNN has made repeated attempts to reach Hightman via phone, text and email, but he has not responded.

Koester and other neighbors have gathered outside Hightman's house, holding signs and chanting, "Nate, where's Irene?"

Last week, Hightman filed a stalking protection order against Koester, accusing her of threatening him, sharing his personal information in the videos and barraging him with unsolicited texts and phone calls.

In his petition, filed in Campbell County Circuit Court, he said Koester drove past his home while shouting his name and has posted his schedule online to incite people against him.

Koester denied the allegations, saying Hightman is trying to silence her. She said she sent him several text messages in July, imploring him to help them find Gakwa.

"I don't care about your criminal charges ..." Koester wrote in one text she shared with CNN. "However Irene is a different story ... she is just missing. Please tell me where to search."

Hightman did not respond to the messages, Koester said.

Meanwhile, Kennedy and Koester say they'll continue rallying the group of mostly Gillette-area women to keep up the search.

As mothers to daughters themselves, they've promised Gakwa's family that they'll keep looking until she's found or there's a resolution in her case.

"We just want her found. We want to bring closure for her family, however long that takes -- I'm hoping it's not going to take long," Kennedy said. "It could be one of us, our mothers, children. We have to try to find her or get them answers."

Kennedy and Koester have started a group message with Gakwa's family in Idaho and Kenya to keep them updated on developments. After months of looking, there's not much new to report. But they say they're not giving up yet.

Some days, while running errands, the women will take a country-road detour instead of a busy street, trying to cram in a quick search. Their first few searches were a chaotic "hot mess," Koester said, but they've since learned to be more organized and focused. Their next search is on September 24.

Koester gives the searchers a bag that includes medicine in case of contact with bugs or plants they're allergic to -- and knives to cut through any tangled items. She keeps bandages handy for unexpected bruises in rough terrain.

The organizers don't reveal the search locations beforehand to avoid any preemptive movement of evidence. They use an app to keep track of their searches so they don't go over the same area twice.

"I'm not a criminal, but I try to think like one," Koester said. "If I wanted to hide something, where would I put it?"