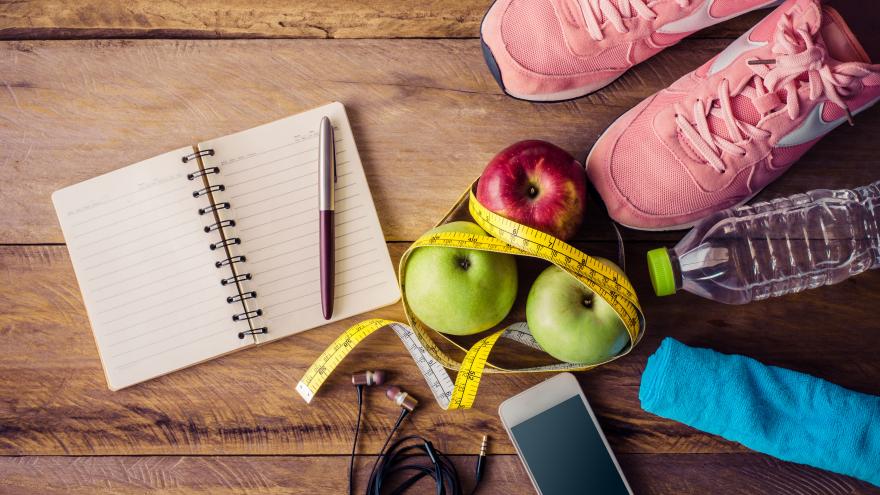 (CNN) -- Next year will be a crucial year for Erika Kirgios as she works to complete her doctorate, publish academic papers and try to land a faculty job at a university.

Not surprisingly, one of her New Year's resolutions is to focus on her career.

In order to find some delight in what could be long nights working alone, she is applying her research in the science of behavior change to pair meticulous work -- writing research articles -- with a decadent temptation -- in her case, a particular candle and cup of tea.

"I'm really going to focus on writing," Kirgios said. "I only light my favorite candle and drink my favorite tea when I'm writing because I need to make sure that I have the external motivations to get started.

The doctoral student at University of Pennsylvania's Wharton School has an advantage -- her research focuses on ways we can ensure successful behavioral change.

The good news is that her lab has found a litany of ways science can make your resolution stick this year. Here's how to proceed.

Kirgios' method for increasing her likelihood of a successful resolution is known as "temptation bundling," according to Katy Milkman, professor of operations, information and decisions at The Wharton School of the University of Pennsylvania.

She is also the author of the upcoming book "How to Change: The Science of Getting from Where You Are to Where You Want to Be."

Kirgios and Milkman tested temptation bundling in a study published this year of more than 6,000 members of 24 Hour Fitness gyms around the United States. One group was given a free audiobook and encouragement to listen to it while working out; a second group was given the free audiobook without the extra nudge; and a third group didn't receive the book.

Those who consciously bundled the temptation of the free audiobook with exercising were 10% to 14% more likely to have a weekly workout than those who didn't have a book.

That same concept can work in other situations.

Create an incentive: As the mother of a 4-year-old, Milkman, the Wharton professor, is thinking about setting a resolution to stay off her phone and be more present with her family during dinner.

One way she could accomplish that is by having her husband make a donation to a charity she hates every time she slips up and responds to a buzz on her phone during dinner.

One online tool, StickK, enables you to put real money on the line to help you stick to your commitments.

Milkman declined to name which loathed charity her husband might pick to send 10 bucks whenever she slips her phone out at the table. But use your imagination, and brainstorm how you can up the ante financially to encourage positive behavior in yourself or a friend.

Create a plan: For goal setting, you can follow the WOOP framework, which stands for Wish, Outcome, Obstacles and Plan. That means beginning with a wish and imagining a positive outcome that could emerge from achieving that goal. Then you identify any obstacles hindering you, before devising a plan to navigate around them.

Piggybacking: It's similar to temptation bundling, and refers to stacking an activity you'd like to start after a routine habit. Many people brush their teeth every day, but fewer people floss. So British scientists designed a study in which one group of people was told to floss before brushing, and another after brushing.

Eight months later, those who trained to floss after brushing had a stronger habit than the other group.

Researchers from Stockholm University and Linköping University in Sweden noticed that resolvers with "approach" goals were 12% more likely to succeed than those with goals centered around avoiding something.

So consider phrasing your resolution, "I want to start cycling," rather than, for instance, "I want to quit eating ice cream."

Mulligan or cheat day: Slipups happen. So factor them in. Rather than trying to meditate every day, your goal could be to meditate five out of seven days per week.

That's one way to avoid what behavior change researchers call the Abstinence Violation Effect, in which you say "screw it" after missing a day of routine and let it slide even more. So use your slips as an opportunity to learn.

"Don't let a slip become a fall," said John Norcross, distinguished professor and chair of psychology at the University of Scranton in Pennsylvania and author of the book "Changeology: 5 Steps to Realizing Your Goals and Resolutions."

Find a partner or a mentor: Besides focusing on writing papers and job searching, Kirgios also has a resolution to do yoga for 15 minutes every evening with her mother.

"That way, we can be each other's commitment device," she said. "I have the added benefit of helping my mom achieve her goals, too, and of sharing some daily quality time."

Hang out too much on Twitter or Facebook? Announce your resolutions on social media, so your community can help hold you accountable, too.

"There's hundreds of studies in the health psychology literature suggesting in fact that social support does in fact make a difference," Norcross said.

And people don't fail at resolutions as much as we think they do. About 40% to 44% of New Year's resolutions are successful, as measured six months later when researchers check back in with resolvers, according to a 1988 study published in the Journal of Substance Abuse.

On the one hand, that feels like a pretty decent track record. On the other hand, it still means the majority of New Year's resolutions fail by the Fourth of July.

It brings up a key question: Should we even set resolutions?

That faith comes from studying what she calls the "fresh start" effect, which she observed in a 2014 study. She and colleagues observed that gym visits, commitments to and Google searches for terms such as "diet" all increase around particular landmarks in time.

These new "mental accounting periods" could be the start of a new semester, a birthday or a holiday.

"I love that there's moments throughout our lives when we sort of stand back and assess what we could do better and I think that's how we grow," she said.

And if you worry about setting a resolution this year because it might not work, there's virtue in trying anyways, to find out what the exercise could teach you.

"One of the key things I feel like I've learned in the last decade of studying this is that goal failure is the norm," Milkman said. "The whole ball game is figuring out how we recover from failure, keep trying and getting better."