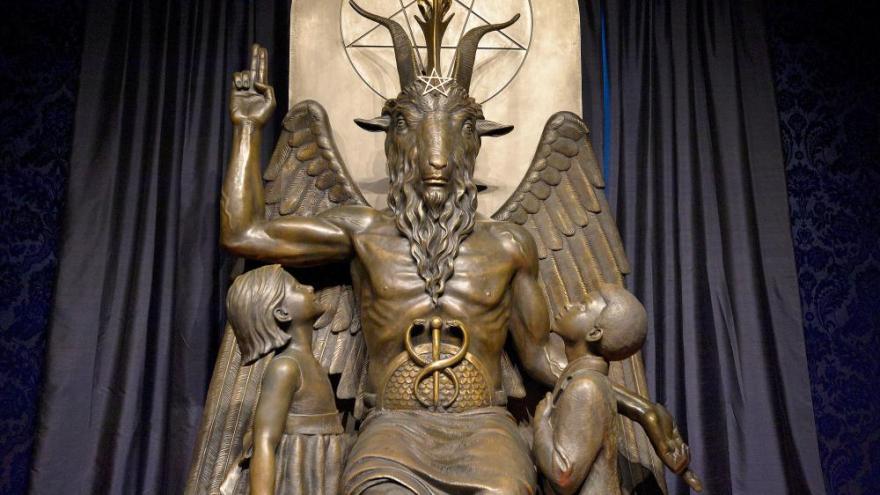 The Baphomet statue is seen at the Satanic Temple in Salem, Massachusetts, in 2019.

The organization, which fights for a separation between religion and pubic affairs, will sift through submissions from 2020 graduates and award two winners $500 in scholarship money.

Interested applicants are asked to submit a creative response in the form of an essay, poem, work of art or film answering one of two questions.

One asks what applicants have done to promote the temple's tenets and mission. The other asks for a description of a teacher who "crushed your spirit, undermined your self-confidence, and made you hate every minute you were forced to be in school."

The scholarship application period opened Monday. Malcolm Jarry, the organization's co-founder, told CNN on Wednesday that 50 applications had been received.

Jarry said the idea came about when a high school student emailed him to ask for a letter of recommendation for a religious scholarship that was being offered at her school.

"I was disappointed that she did not receive the scholarship and saw that moment as an opportunity to offer our own scholarship that reflects our values," he said.

"In addition to promoting our values by honoring those who engage in pro-social rugged individualism, the scholarship allows students a rare opportunity to be critical of an institution that only rewards sycophantic adulation," Jarry said.

The group, headquartered in Salem, Massachusetts, says its mission is "to encourage benevolence and empathy among all people." Members believe Satan is a "literary construct," not an actual being.

The Satanic Temple's website says the group advocates the "pursuit of knowledge," but believes people confuse learning and schooling. "Students are often expected to praise their schools in spite of the fact that many students endure unconscionable abuse at the hands of faculty, administration, and their peers," Jarry said.

"It is common to hear a successful person talk about a teacher who inspired them, but they never acknowledge that after 13 years of schooling they were quite fortunate if they came across just one."

The Satanic Temple has used symbols of Satan to draw attention to what it sees as the hypocrisy of Christian symbols on government property. For years, it petitioned to have a massive Baphomet statue -- a goat-headed symbol linked to Satan -- in the Oklahoma state Capitol, which was home to a Ten Commandments statue.

The scholarship is open until August 31. Winners will be announced on the temple's website September 15.