The robots are coming for your job, too 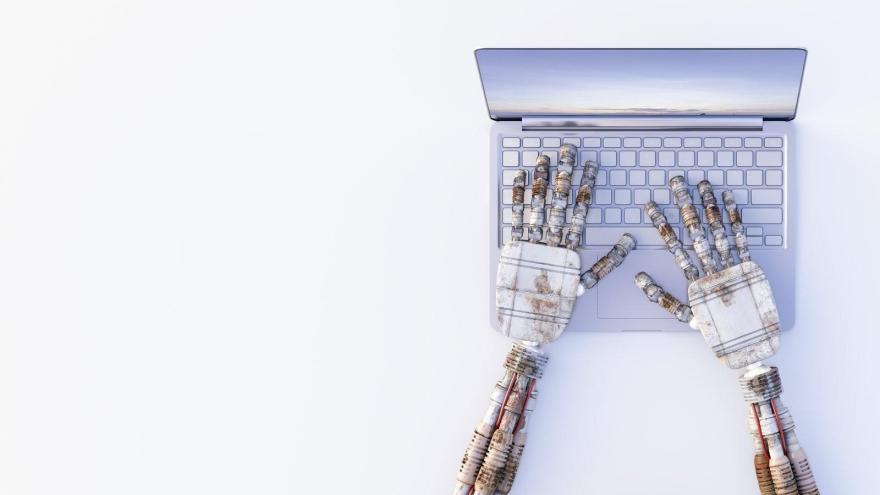 The robots. They're coming for your jobs. All of you.

Long the prediction of futurists and philosophers, the lived reality of technology replacing human work has been a constant feature since the cotton gin, the assembly line and, more recently, the computer.

What is very much up for debate in the imaginations of economists and Hollywood producers is whether the future will look like "The Terminator," with self-aware Schwarzenegger bots on the hunt, or "The Jetsons," with obedient robo-maids leaving us humans very little work and plenty of time for leisure and family. The most chilling future in film may be that in Disney's "Wall-E," where people are all too fat to stand, too busy staring at screens to talk to each other and too distracted to realize that the machines have taken over.

We're deep into what-ifs with those representations, but the conversation about robots and work is increasingly paired with the debate over how to address growing income inequality -- a key issue in the 2020 Democratic presidential primary.

The workplace is changing. How should Americans deal with it?

"There's no simple answer," said Stuart Russell, a computer scientist at UC Berkeley, an adjunct professor of neurological surgery at UC San Francisco and the author of a forthcoming book, "Human Compatible: Artificial Intelligence and the Problem of Control." "But in the long run nearly all current jobs will go away, so we need fairly radical policy changes to prepare for a very different future economy. "

In his book, Russell writes, "One rapidly emerging picture is that of an economy where far fewer people work because work is unnecessary."

That's either a very frightening or a tantalizing prospect, depending very much on whether and how much you (and/or society) think people ought to have to work and how society is going to put a price on human labor.

MIT Technology Review tried to track all the different reports on the effect that automation will have on the workforce. There are a lot of them. And they suggest anywhere from moderate displacement to a total workforce overhaul with varying degrees of alarm.

One of the reports, by the McKinsey Global Institute, includes a review of how susceptible to automation different jobs might be and finds that hundreds of millions of people worldwide will have to find new jobs or learn new skills. Learning new skills can be more difficult than it sounds, as CNN has found at car plants, such as the one that closed in Lordstown, Ohio.

Almost everyone who has thought seriously about this has said that more automation is likely to lead to more inequality.

It is indisputable that businesses have gotten more and more productive but workers' wages have not kept pace.

"Our analysis shows that most job growth in the United States and other advanced economies will be in occupations currently at the high end of the wage distribution," according to McKinsey. "Some occupations that are currently low wage, such as nursing assistants and teaching assistants, will also increase, while a wide range of middle-income occupations will have the largest employment declines."

"The likely challenge for the future lies in coping with rising inequality and ensuring sufficient (re-)training especially for low qualified workers," according to a report from the Organization for Economic Cooperation and Development.

One Democratic presidential candidate -- Andrew Yang, the insurgent nonpolitician -- has built his campaign around solving this problem. Yang blames the automation of jobs more than outsourcing to China for the decline of American manufacturing and draws a direct line between that shrinking manufacturing sector and the rise of Donald Trump.

"We need to wake people up," Yang recently told The Atlantic. "This is the reality of why Donald Trump is our President today, because we already blasted away millions of American jobs and people feel like they have lost a path forward."

If automation takes the jobs, should all people get a government paycheck?

Yang's answer to the problem is to give everyone in the US, regardless of need, an income -- he calls it a "freedom dividend" -- of $1,000 per month. It would address inequality, both economic and racial, he argues, and let people pursue work that adds value to the community.

It's not a new idea. Congress and President Richard Nixon nearly passed just such a proposal in the early 1970s as part of the war on poverty. But now, after decades of the GOP distancing itself from social programs, the idea of a universal basic income seems about as sci-fi as the new "Terminator" movie (yes, they're making another one) that's coming out this year.

He specifically points to truck driving as a profession that is key to the US economy today but could and may be fully automated in the very near future. Automating trucking will help the environment, save money and help productivity, he says. But it won't help truck drivers.

On the other hand, truck driving, while honorable work, might not be many people's life's ambition. In this way, robots would be taking jobs that humans might not want unless they had to do them, which they currently do.

"When you accept these circumstances, that we're going to be competing against technologies that have a marginal cost of near zero, then quickly you have to say OK, then, how are we going to start valuing our time? What does a 21st century economy look like in a way that serves our interests and not the capital efficiency machine?" he says. And that's how he, and a lot of liberal economists and capitalists like Elon Musk, arrive at the idea of a basic income.

Yang argued at a CNN town hall this year that it's not enough for people to organize as workers in unions to protect jobs.

"I don't think we have the time to remake the workforce in that way," he said. "We should start distributing value directly to Americans."

Creating a population that can subsist on a basic income, without work, would end up reshaping how society works altogether.

"For some, UBI represents a version of paradise. For others, it represents an admission of failure -- an assertion that most people will have nothing of economic value to contribute to society," writes Russell. "They can be fed and housed -- mostly by machines -- but otherwise left to their own devices."

Yang is focused more on the immediate threat he says automation poses to American jobs. And politicians aren't talking about it honestly because they are too focused on being optimistic.

What to do with our time?

Not everyone thinks society would fall apart, and there's actually been a lot of serious concern about what people will do when productivity increases to a point where they don't have to work as much.

In an important paper in 1930, the economist John Maynard Keynes wrote that humans would have to grapple with their leisure in the generations to come.

"To those who sweat for their daily bread leisure is a longed-for sweet -- until they get it," he wrote, later adding that "man will be faced with his real, his permanent problem -- how to use his freedom from pressing economic cares, how to occupy the leisure, which science and compound interest will have won for him, to live wisely and agreeably and well."

Rather than grappling with the problem of leisure, automation can often lead to unforeseen problems. The cotton gin made it so slaves in the American South did not have to remove seeds from cotton, but it also led to an explosion of slavery as cotton became more easily produced.

And while it makes life easier on individual workers, managing the transition from one type of economy to the next (farmer to manufacturer, to information specialist and now beyond) has been a key long-term reality for the American worker.

Is the pace of change different this time?

No one has thought more about this than labor unions. AFL-CIO Secretary-Treasurer Liz Shuler agrees with Yang that automation is one of the biggest challenges we're facing as a country and it's not getting the attention it deserves. But she's not yet worried about dystopia.

"The scare tactics are a little extreme," she said in an interview, arguing that reports of tens of millions of American jobs lost by 2030 are probably overstated.

"Every time a technological shift has taken place in this country there have been those doomsday scenarios," she said in an interview.

It was already an issue in the 1950s, Shuler pointed out. "You have (then-United Auto Workers President) Walter Reuther testifying before Congress talking about how automation was going to change work and people were making these wild predictions that if you brought robots into auto plants that there would be massive unemployment," she said.

Reuther's testimony is really interesting to read, by the way. Check it out. "The revolutionary change produced by automation is its tendency to displace the worker entirely from the direct operation of the machine," he said. He argued that unions weren't opposed to automation but that they wanted more help from companies and from the government for workers dealing with a changing workplace.

Yang counters that argument by noting that automation has sped up, making it harder for workers, employers and the government to adjust. "Unlike with previous waves of automation, this time new jobs will not appear quickly enough in large enough numbers to make up for it," he said on his website.

Somewhere in the middle is where we'll end up

Shuler said American workers need to have the conversation about the future of work more urgently today.

"We all have a choice to make," she said. "Do we want technology to benefit working people, and our country, as a result, does better? Or do we want to follow a path of this dark, dystopian view that work is going to go away and people are going to have nothing to do and we're just going to be essentially working at the whims of a bunch of robots?"

Somewhere in the middle, she argued, is where we'll end up.

"We're going to work alongside technology as it evolves. New work is going to emerge. We want to make sure working people can transition fairly and justly and responsibly and we can only do that if working people have a seat at the table."

Shuler has an interest in workers and their rights today, but Russell writes that long-term, as automation of work becomes more tangible, the country will have to change its entire outlook on work and what we teach children and people to strive for.

"We need a radical rethinking of our educational system and our scientific enterprise to focus more attention on the human rather than the physical world," he writes. "It sounds odd to say that happiness should be an engineering discipline, but that seems to be the inevitable conclusion. "

In other words: We will have to figure out how to be happy with the robots and the automation, because they are coming.