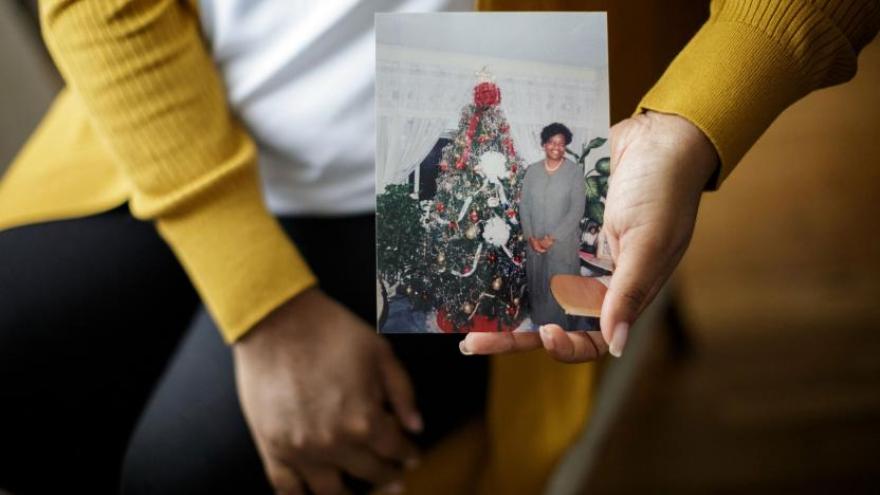 At her home in Westbury, New York, Nykiah Morgan holds a photo of her mother, Dorothy Morgan, last month.

(CNN) -- Days before the nation marks 20 years since the September 11 terror attacks, New York officials say the remains of two more victims have been identified through DNA testing.

Dorothy Morgan, of Hempstead, New York, and a man whose name is being withheld at his family's request were the 1,646th person and 1,647th person to be identified as victims of the attacks on the World Trade Center in New York, the office of the city's chief medical examiner said Tuesday.

They were identified through DNA analysis of previously unidentified remains recovered from the World Trade Center site. The attack there claimed 2,753 lives; more than 220 other people were killed in Washington, DC, and outside of Shanksville, Pennsylvania.

These were the first identifications of World Trade Center victims since October 2019. The remains of more than 1,100 victims -- about 40% of those who died there -- are yet to be identified, the medical examiner's office said.

"Twenty years ago, we made a promise to the families of World Trade Center victims to do whatever it takes for as long as it takes to identify their loved ones, and with these two new identifications, we continue to fulfill that sacred obligation," city Chief Medical Examiner Dr. Barbara A. Sampson said.

Recent use of next-generation sequencing technology -- more sensitive than previous techniques -- has aided identifications and "promises to result in more," the office said in a news release.

Dorothy Morgan, 47, worked as an insurance broker in the North Tower.

Her daughter, Nykiah Morgan, told CNN's Anderson Cooper on Thursday that "it's been an emotional roller coaster" realizing her mother was identified.

"My mom was beautiful. My memory that pops up in my head was watching my mom get ready for work in the mornings," she said. "She was just an amazing woman. Everyone she came into contact with just loved her."

It took Nykiah years to accept her mother's death, she didn't want to believe it when she saw the towers fall. She told herself her mother was out there.

"Maybe (she) had amnesia, and was released from the hospital. I had a whole story in my head and she was out there living life, happy," Nykiah said.

She held a celebratory service for her mother months after the attacks, but it did not seem real to her.

Now that she knows her mother's remains have been identified, she's struggling to deal with that realization.

"What's making me deal with it is having to go through the process of obtaining the remains, which I have not begun that process because I feel like that is what makes it real," she said.

Nykiah admitted she's never visited Ground Zero and Saturday when she reads her mother's name will be her first time at the site.

For a long time September 11 didn't exist to her.

"September 11 on my calendar didn't exist. It was September 10, September 12," she said. "If it was a work day, I stayed home. I didn't answer phones, didn't watch television at all, nothing. September 11 did not exist for me for many years."

"We continue to push the science out of necessity to make more identifications," said Mark Desire, assistant director of the office's forensic biology department. "The commitment today is as strong as it was in 2001."