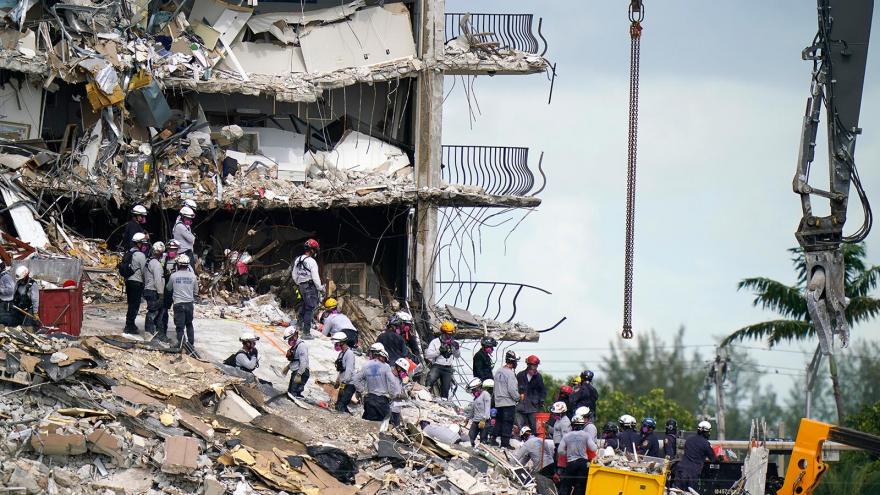 (CNN) -- Search and rescue efforts at the partially collapsed South Florida condo will temporarily pause as officials prepare for the demolition of the building's remaining units, officials said Saturday.

The search and rescue operation paused at 4 p.m., Miami-Dade County Mayor Daniella Levine Cava said at a news conference Saturday evening. Officials are waiting on instructions from the engineers who are inspecting the site and will resume search and rescue when they are cleared to do so.

Levine Cava did not provide a timeline for the planned demolition, but officials said earlier a crew could demolish the remaining units of Champlain Towers South as soon as Sunday, ahead of the approaching Tropical Storm Elsa. Otherwise, Elsa's winds, which might reach the area early next week, could topple the structure unsafely, officials said.

"So it has been determined ... as the process is underway that we need to put a temporary pause," Levine Cava said. "And we are continuing to receive updates about the condition of the standing structure and we will begin the search and rescue once again on any sections of the pile that are safe to access as soon as we are cleared."

Nearly 55 of the 136 units of the Champlain Towers South, in Surfside just north of Miami Beach, pancaked to the ground in the early hours of June 24. The number of confirmed deaths remains at 24, Levine Cava said, and 121 people are unaccounted for.

While the demolition will temporarily halt search and rescue operations in the rubble of the already-collapsed portions, searchers could resume work without fear of the standing portion coming down on them Surfside Mayor Charles Burkett said at an earlier news conference.

"I think as early as tomorrow (Sunday)" the standing portions could be demolished, Burkett said.

Officials' previous thinking about the timeline -- that it couldn't be done before Elsa arrived -- changed after they spoke late Friday with a demolition expert who indicated it could be done sooner, Levine Cava said.

"We're still very hopeful that we can do the demolition before the storm," she said Saturday evening. "We are proceeding as quickly as we possibly can."

The forecast track for Elsa is uncertain, but even if it's centered well west of Surfside as currently predicted, its windy outer bands could hit Surfside and southeastern Florida by Tuesday, forecasters say.

Levine Cava on Friday signed an order allowing crews to demolish the remaining structure -- but at the time said it could be weeks before the demolition could happen.

Demolition plans still were being made, but they would aim to take the standing portions straight down with charges, Miami-Dade County Fire Chief Alan Cominsky said Saturday morning.

The demolition would have "a very narrow footprint" so evacuations in the area are not planned, besides temporarily moving the rescuers from the rubble, Levine Cava said. Already-searched areas of the rubble would be covered before the demolition, Cominsky said.

Controlled Demolition Inc. would be in charge of the demolition, and has done large demolitions in the past, Levine Cava said.

Search and rescue operations continued Saturday at the site, where teams have been scouring concrete rubble up to 16 feet deep.

Late Friday, a county attorney said in a court filing that the remaining portion of the building is not structurally sound and is behaving in ways that indicate it may fall down.

Search and rescue crews were under "immediate threat" due to the building's instability and Tropical Storm Elsa, which currently is in Caribbean, said David Murray, the attorney for Miami-Dade County.

Murray's court filing said a collapse of the remaining structure would "cause the release of hazardous household materials, particulate matter, and will pose fire risk."

"An uncontrolled collapse of the structure -- which is surrounded by residential property, and which is currently being worked and secured by hundreds of fire rescue personnel, police officers, and other government employees -- poses significant risk to human life and property," Murray wrote in the filing.

A 7-year-old girl who died in the collapse was the daughter of a member of the Miami Department of Fire and Rescue, officials said Friday.

The girl's father did not find her body, officials said, adding that other team members alerted him Thursday night.

A relative, Nicole Mejias, identified the girl as Stella Cattarossi, who Mejias said was found dead in the rubble with her mother, Graciela Cattarossi.

Mejias said five of her family members were in the building when it collapsed, and three others remain unaccounted for: Stella's grandparents Gino and Graciela Cattarossi -- whom Stella and her mother lived with -- and her aunt, Andrea Cattarossi. Mejias said Andrea was visiting from Argentina, where she has three sons.

"We just miss them so much already," Mejias told CNN. "We wish this tragedy didn't happen and will always remember them."

Capt. Ignatius Carroll, a spokesperson for Florida Task Force 2, told CNN in an interview Saturday that it was "very difficult" finding the girl, since she was the child of one of their "brother firefighters." But it gave the girl's family "peace of mind," he said.

"And that's the goal that we have with everybody that's out there on that pile, trying to do their best in this continued search effort to reunite families with their loved ones," Carroll said.

Officials Friday released the names of three people who died in the collapse. Bonnie Epstein, 56; Claudio Bonnefoy, 85 and Maria Obias-Bonnefoy, 69 were recovered over the past two days.

Max Friedman, a former member of the condo association, told CNN Friday that board resignations -- largely over how to find the $15 million that was needed to fix the building's many structural issues -- held up the much-needed repairs.

"I would never quit a board -- I think that's terrible," said Friedman, who was a member from 2011 until 2016 and lives in Manhattan. When asked about the general sentiment among residents, he said, "there was confusion" and he personally felt the resignations of board members were "inappropriate."

As the investigation continues into what led to the partial collapse, public scrutiny has turned to the condo board and its response to a 2018 report citing "major structural damage."

"We know that answers will take time as part of a comprehensive investigation and we will continue to work with city, state, local, and federal officials in their rescue efforts, and to understand the causes of this tragedy," the board said Friday in a statement.

Still, Friedman was careful to note that he didn't think the board could have possibly known that the building was in immediate danger.

"The township didn't tell us," said Friedman, referring to Prieto, who was Surfside's building official at the time.

Friedman described Champlain Towers South as a tight-knit community of residents from all over the world. He said one of the residents he was close with is among the confirmed dead, and other friends are unaccounted for.

"Every civil engineer from here to the moon is now drawing conclusions," Friedman said. "Eventually, it'll be determined what caused this."