The real problem for Robert Kraft is the video, not the charges, experts say 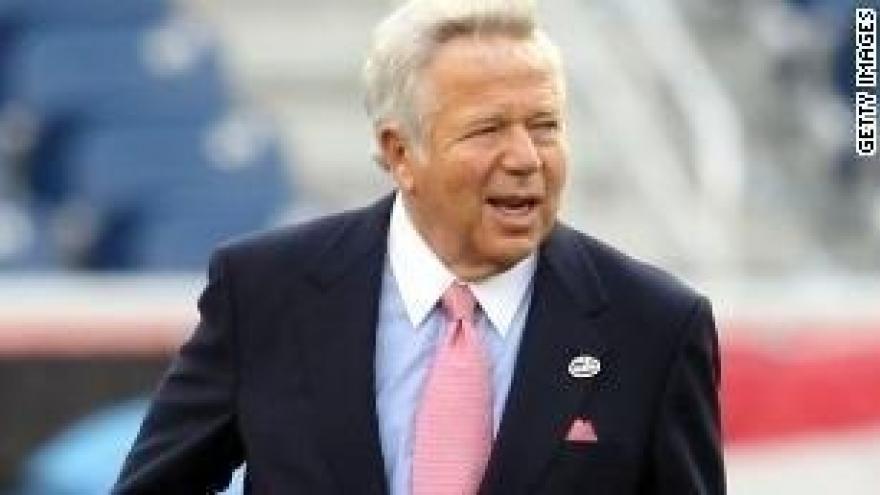 Robert Kraft is trying to block the release of purported video evidence in his prostitution solicitation case, underscoring what experts consider the real threat

(CNN) -- Consider the options: One year in jail, community service, or a potential life sentence on the internet if an embarrassing video of you goes public.

New England Patriots owner Robert Kraft is trying to avoid all these scenarios since being charged with two misdemeanor counts of soliciting prostitution.

Authorities say Kraft was recorded on surveillance footage paying for and receiving sex acts at a day spa in Jupiter, Florida. Kraft pleaded not guilty to the charges and a spokesman denied that he engaged "in any illegal activity."

Kraft is arguably the case's most high-profile defendant, generating speculation over the possible consequences the 77-year-old billionaire could face if the allegations prove true.

Lawyers say jail seems unlikely for a first-time offender of Kraft's stature. Already, Florida prosecutors offered to drop misdemeanor charges against him in exchange for fines, community service and an admission that he would be found guilty if he went to trial. But a source familiar with the case told CNN that Kraft will not accept the deal.

Meanwhile, Kraft and other defendants are trying to prevent the footage from being released, underscoring what experts consider the real threat to his livelihood.

"It's really all about reputation, and when it comes to reputation it's all about the video," said Rich Matta, the CEO of ReputationDefender, which specializes in online reputation management.

It's one thing to hear or read about allegations of criminal activity, said Antonio Williams, an associate professor at Indiana University's School of Public Health who specializes in brand management in sports.

But seeing is believing, he said. If the footage shows what prosecutors and police claim it shows, it will be difficult for Kraft to deny engaging in illegal activity, and even harder for the NFL to minimize his alleged behavior when weighing possible sanctions, Williams said.

Matta surmised that Kraft's wealth and reputation will likely shield him from life-altering consequences, no matter the case's outcome. But the humiliation of such an alleged video in the public domain is no small matter for a public figure like Kraft, Matta said.

"This is mostly just about personal embarrassment," Matta said. "It's already been a big embarrassment for him. The video's release or a leak of the video would just make it worse."

Where the situation stands with the tapes

So far, the footage has not been released, and Kraft and other defendants want to keep it that way.

Kraft waited four weeks to speak about the matter. When he did, he apologized for hurting those who "rightfully hold me to a higher standard," including family, friends, co-workers and fans.

Before the apology, Kraft and 14 of the other men charged filed a motion seeking to prevent the videos and other evidence from being released. The request for a protective order said the evidence is part of an ongoing investigation and should not be disclosed.

A complaint filed February 25 alleges that the footage was illegally obtained in violation of the plaintiffs' right to privacy.

The complaint -- filed on behalf of plaintiffs who are described as people arrested in the case and spa patrons who were not arrested but may appear in the footage -- says releasing the footage would cause "irreparable harm and further public humiliation, shame, ridicule."

Because the footage was obtained through a warrant, it's likely to be upheld as legal, said CNN legal analyst Mark O'Mara, an attorney based in Florida.

In the motion filed last week, lawyers for Kraft and the other plaintiffs echoed this notion, saying the evidence was confidential and exempt from disclosure because none of it had been produced in discovery.

Also, if Kraft's lawyers don't have the footage, they can't give it to the NFL if the league asks for it, O'Mara said.

On Thursday, Kraft's attorneys filed a motion in Palm Beach County court to keep the video out of a trial, saying it was illegally obtained.

How do you punish a billionaire?

Even if Kraft is absolved of wrongdoing, the videos could become subject to a public record request after the case is over, O'Mara said.

What happens then depends on what they show, he said.

Regardless of what happens to the footage, the NFL is likely to open an investigation under its personal conduct policy, said lawyer Marissa Pollick, a lecturer in sport management at the University of Michigan School of Kinesiology.

The policy applies to "everyone who is part of the league," including owners, Pollick pointed out. In fact, it warns that owners "have traditionally been held to a higher standard and will be subject to more significant discipline" when violations occur.

The policy also says criminal charges are not necessary for the league to conduct its own investigation, Pollick said.

Given the nature of the allegations and the pressure the league is under to crack down on bad behavior, "I would think the NFL would not want to be perceived as rendering special treatment" to Kraft by forgoing an investigation, Pollick said.

But sport management experts and journalists said it's hard to predict what kind of consequences one of the most powerful men in American football might face, especially since the circumstances of his case are so unique.

Among the last owners to face serious disciplinary action for detrimental conduct was Jim Irsay of the Indianapolis Colts. After pleading guilty to driving while intoxicated in 2014, he was suspended for six season games and fined $500,000.

Former Carolina Panthers owner Jerry Richardson sold the team he founded amid allegations of workplace sexual harassment in 2018. He was never criminally charged and an NFL investigation resulted in a $2.75 million fine.

The most serious practical consequence, it seems, is that Kraft could lose the team, but there's no precedent for that, said Diana Moskovitz, a senior editor for sports website Deadspin. Or, the league could dock him draft picks, but that would punish the team just as much as him, she said.

"For better or worse, he has such immense wealth and power it's really hard to punish him," she said. "He'll still probably own the team. He'll still have Tom Brady as his quarterback. Bill Belichick still gets to be his coach."

The hit to Kraft's public stature could be as bad as it gets, "and I don't discount that," Moskovitz said. But short of new allegations showing a pattern of criminal activity, she's skeptical that his current case will have a lasting impact.

"As long as he owns the New England Patriots -- especially if they keep winning -- he may have to dial down his profile for a little, but he'll probably do what other famous people have done: You go away for a while and you wait for people to forget."