The proxy fight between Trump and Pence continues with Arizona rallies 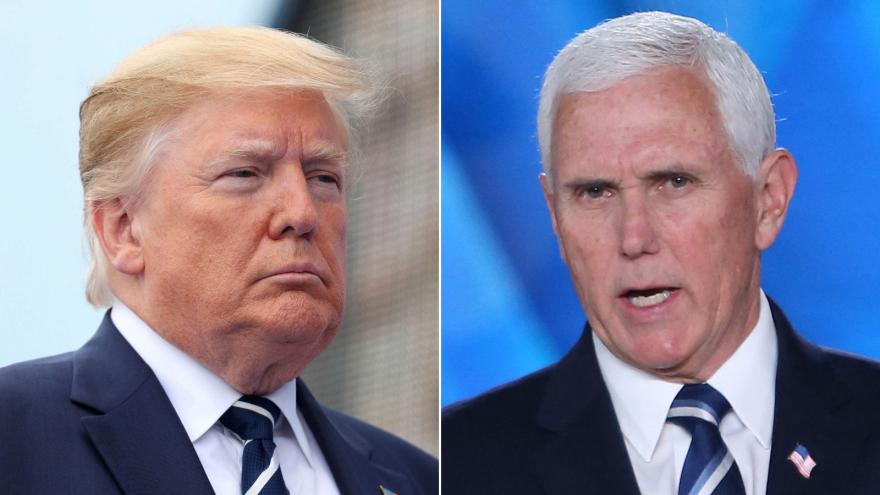 (CNN) -- Former President Donald Trump and former vice president Mike Pence held dueling events Friday in Arizona, turning the state's upcoming Republican primary for governor into a proxy fight between the two former allies as they inch toward what could be a 2024 showdown.

The Arizona race is the latest test of Republican voters' priorities, as they decide between a candidate who has built her campaign around Trump's election lies and one who more closely reflects Pence's desire to steer the GOP's focus away from relitigating 2020 and toward conservative policies.

Pence attended two events Friday with Karrin Taylor Robson, the former Arizona Board of Regents member who has become the GOP establishment favorite in the governor's race and is endorsed by term-limited Republican Gov. Doug Ducey.

Pence, Robson and Ducey visited a Peoria business that manufactures tactical equipment for law enforcement on Friday morning, and later planned to attend a border security briefing at the National Border Patrol Council's office in Tucson.

In Peoria, Pence made no mention of Trump's planned visit to Arizona hours later, or of the revelations of the House committee investigating January 6, 2021 -- when Pence's refusal to try to thwart voters' will as Congress counted electoral votes resulted in Trump turning on him.

But he did take a thinly veiled swipe at Lake for centering her campaign on Trump's 2020 resentments, saying that "there are those who want to make this election about the past."

"When you get out and vote for Karrin Taylor Robson, you can send a deafening message that will be heard all across America that the Republican Party is the party of the future," Pence said.

Trump, meanwhile, campaigned with a slate of candidates who have parroted his lies about widespread fraud in the 2020 election -- led by Kari Lake, a former local television news anchor who Ducey said Sunday on CNN's "State of the Union" is "misleading voters with no evidence."

Also part of that Trump ticket are Senate candidate Blake Masters, who is seeking to take on Democratic Sen. Mark Kelly in a race that is crucial in the battle for control of the Senate, as well as secretary of state contender Mark Finchem and attorney general hopeful Abe Hamadeh.

"President Trump taught us how to fight, and I took a few notes," Lake said at Trump's rally in Prescott Valley on Friday night. She referred to Trump as "Superman."

Trump ticked through his usual criticisms of President Joe Biden and revisited the grudges he holds against some Arizona figures who rejected his lies about the 2020 election.

He attacked Rusty Bowers, the Arizona state House speaker and a state Senate candidate who detailed to the House January 6 committee Trump's efforts to pressure him to say the 2020 election was fraudulent.

The former President called Bowers "a RINO coward who participated against the Republican Party" in the committee's hearing, and he endorsed Bowers' opponent.

The question in Arizona's upcoming primary is whether Trump and his slate of candidates will emerge as a new dominant force in what's become one of the most important presidential swing states, or whether the state's GOP establishment can fight back. The stakes are high, with Arizona's races for statewide office among the most closely watched on the 2022 midterm map.

Trump only made a brief mention of the Supreme Court's decision overturning Roe v. Wade, underscoring the different approaches of the former President and Pence, who has focused in recent weeks on the next steps that Republicans who oppose abortion should take in statehouses across the country.

Ducey said in an interview that Pence "brings the imprimatur of a true conservative to this race."

"He's an exceptional leader," Ducey said. "He's been an invaluable partner to me and my team. When he served as governor of Indiana, he was a great colleague and collaborator with other governors. And as Vice President, he continue[d] to be. So when Mike Pence speaks out on this race, it brings all of that and more."

The winner of the Republican primary for governor is likely to face Secretary of State Katie Hobbs, who is widely seen as the frontrunner in the Democratic primary.

If Lake wins the August 2 primary, she would join Pennsylvania's Doug Mastriano on the list of GOP gubernatorial nominees in swing states who have embraced lies and conspiracy theories about the 2020 election.

If those election deniers win in November's midterm elections, they would be poised to control their states' election machinery or influence its legal process in the 2024 presidential race.

Arizona is the second gubernatorial primary in which Pence has made a move aimed at limiting Trump's influence.

In Georgia, Pence rallied on the eve of the May primary with Gov. Brian Kemp, a Republican who easily defeated the Trump-endorsed former Sen. David Perdue in a contest that revolved around Trump's pledge to punish Kemp for refuting the former President's lies about fraud in a state Biden won by 11,779 votes.

Biden defeated Trump in Arizona by 10,457 votes, a reality Trump has also rejected. His lies about fraud led Republicans who control the state Senate to commission a partisan review of the 2020 results in Maricopa County, the home of Phoenix.

That review -- conducted by a firm with no experience auditing elections -- cast doubt on some mail-in ballots, due to what elections experts pointed out were the reviewers' misunderstandings about how the process works. But it did not find any substantial change in the state's vote totals.

Pence in recent weeks has attempted to steer the Republican Party away from Trump's obsession with the 2020 election and toward the conservative policies that Pence was known for advocating as a congressman and Indiana governor, before he joined Trump's ticket in 2016.

In a speech Wednesday night at the Florence Baptist Temple in Florence, South Carolina -- one of the first states to vote in the GOP's presidential nominating process -- Pence focused on the path for abortion opponents after the Supreme Court reversed Roe v. Wade.

He used his remarks to deliver a blueprint of sorts to his fellow Republicans to strengthen abortion restrictions and further limit the federal government's involvement in the issue. He said Republicans need to back policies that would make adoption easier and less expensive, and urged the party to push for state laws banning abortion.

"As we gather tonight, we must recognize that we've only come to the end of the beginning. Standing here in the first days of a post-Roe America, we must resolve that we will not rest, we will not relent until the sanctity of life is restored in the law of every state in the nation," Pence said.

Trump, meanwhile, remains focused on feuds with state officials over the legitimacy of the 2020 election.

Following a Wisconsin Supreme Court ruling that declared mail-in ballot drop boxes illegal in future elections, state Assembly Speaker Robin Vox, a Republican who hired a former state Supreme Court justice who had already embraced Trump's lies about election fraud to search for evidence to support those claims, said that Trump called him last week to urge him to decertify the state's 2020 results.

"He would like us to do something different in Wisconsin. I explained it's not allowed under the constitution. He has a different opinion," Vos told CNN affiliate WISN.