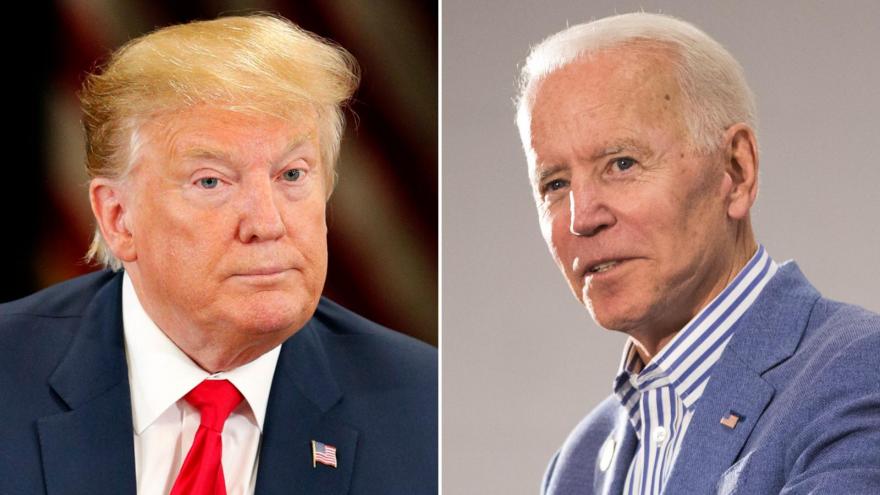 (CNN) -- The campaign rallies are a distant memory. The final chapter of the primary calendar is awash in uncertainty. The summer political conventions are in doubt.

Yet it would be a mistake to think the 2020 presidential race is on hold. In fact, it's unfolding right before our eyes.

For President Donald Trump, the power and the perils of incumbency are on full display as he seeks to steer the nation through a never-before-seen moment in modern America. He's cast himself as a wartime president, even as he sends conflicting signals on whether his bigger priority is ending the pandemic or restarting the US economy, both of which will now undoubtedly influence his re-election.

"It's hard not to be happy with the job we're doing, that I can tell you," Trump said Wednesday in the White House briefing room, where he stands before dinnertime most every night to deliver a rosy assessment of the crisis that seldom mentions the rising US death toll, overwhelmed hospitals and cries for help from doctors, nurses and local leaders.

Seven months before Election Day, the President is working overtime to build a glowing narrative about his administration's coronavirus response.

His rally-like rhetoric from the White House may be paying dividends -- for now, at least -- as a new CNN Poll of Polls on Friday showed more Americans view Trump's handling of the crisis through a positive light. The average of five national surveys released this week shows that his approval rating on handling coronavirus is 52%, while his disapproval stands at 45%. His overall approval rating average is higher than at any point of his presidency.

It's an open question whether those early reviews represent more of a rallying effect, which presidents often experience during times of national emergency, or if the support will endure after the true scope of the deadly outbreak is fully known.

Joe Biden and his advisers are racing to compete with Trump's megaphone and his often self-congratulatory version of events, which routinely clash with the truth. The Biden team is working to adapt to the new realities of a campaign playing out in a nation under quarantine, isolation and fear.

Speaking from his home in Delaware, where aides built a basement television studio, Biden took pains not to overtly politicize the coronavirus spread. He even said he would welcome a strong approval rating for Trump, if it pushed the White House to provide needed assistance to cities and states.

"I hope that he's so strong that he's up way above that, because we need the help now," Biden said. "We need help now."

The urgent empathy in Biden's voice underscored the uncertainty and fragility of this moment. While he has remained largely above the political fray, his campaign has pushed back aggressively against Trump as his outside allies have launched a multi-million dollar ad campaign highlighting how the White House downplayed the crisis for weeks.

The primary campaign may be frozen in time, with several states postponing elections until June and Bernie Sanders staying in the race, even though Biden has built a nearly insurmountable lead in delegates. But the general election has already begun, a contest that is remarkably more complicated in the wake of the coronavirus pandemic.

'This campaign can't be on hold'

The events of the coming weeks could shape the race for months to come, several Democratic strategists say, arguing the party cannot afford to cede this moment to Trump or allow Republicans to derisively define Biden while he is striving to put the crisis above politics.

"This campaign can't be on hold," said Robby Mook, who ran Hillary Clinton's race against Trump in 2016. "This is the campaign."

Facing the biggest challenge of his presidency, Trump had been missing something he relishes: an enemy to vilify. Now, he's taken to blaming China for inflicting pain on the world and has returned to lashing out at the media to portray himself as a victim to his supporters.

To Mook, it's a familiar pattern that he saw slowly unfold four years ago.

"People see 2016 as this crazy fluke, which it was in many ways," Mook said. "But that's missing the bigger point that Trump has a way of owning what we're talking about and grinding in a set of doubts about his opponent. He projects his greatest weaknesses on his opponent -- and I see that happening again."

Matt Rhoades, the campaign manager for Mitt Romney's race against Barack Obama in 2012, said the power of incumbency was one of the strongest tools in Trump's arsenal. While sitting presidents may own the problems that took place during their term, he said, they also have an unparalleled ability to control the conversation.

"This is why it's so difficult to beat an incumbent president. Never underestimate the reach, the power and the strength of a Rose Garden strategy," said Rhoades, who also worked on President George W. Bush's reelection campaign in 2004. "I'd rather own the problem and be in charge and take action to fix it than be the person on the sidelines screaming fire."

The Biden team is steadily preparing to wage a battle for which there is no playbook, with a former vice president not accustomed to being on the sidelines of power after spending nearly a half-century in the Senate or the White House.

"I'm chomping at the bit," Biden said. "I wish I were still in the Senate, you know, being able to impact some of these things, but I am where I am and I hope to be the nominee of the Democratic Party and I hope I'm able to get my message across as we go forward."

But it remains to be seen how successful he will be in projecting that message.

His aides have rushed to adapt to the rapidly-changing environment, installing the television studio, launching a podcast and increasing his visibility -- all from his Delaware basement as he, like much of America, is working from home.

A campaign once thought to be waged over the future of health care, economic fairness and America's place in the world is now revolving around something else: The administration's response to coronavirus and the economic collapse. How the nation recovers by November will be a key metric for voters.

In the president's mind, a robust economy was always his best ticket to winning a second term. Fears of a recession are now driving his push to accelerate the opening of businesses across the country by Easter, despite protests from health experts, many leading Republicans and nearly all Democrats about the wisdom of doing so.

"I don't think it's going to end up being such a rough patch, especially if we can open -- the sooner the better," Trump said Wednesday. "It's going to open up like a rocket ship."

That, of course, remains to be seen.

While presidential campaigns often do not end on the same issues in which they began -- in 2008, for example, a campaign driven by opposition to the Iraq war ended on the economic crash -- it's almost certain the coronavirus outbreak will be a central issue in the 2020 race.

But for the next seven months, this race has little precedent in American history.

Although the country is enduring a moment of national challenge and sacrifice, Trump has done very little to inspire the unity that emerged in the aftermath of the terrorist attacks on September 11, 2001, when Democrats and Republicans initially rallied together in common purpose.

"Nothing really quite equals what we're dealing with here," said Douglas Brinkley, a CNN presidential historian and professor at Rice University. "The public health crisis and health care in general are going to be a flagship issue of 2020."

How prepared the Trump administration was for the coronavirus outbreak, he said, is almost certain to be a central issue in the campaign, along with its competence and readiness for other types of calamities.

One of the biggest unknown factors, he said, is whether traditional campaigning will resume by summer or fall or if the candidates will turn to alternatives. A century ago, a handful of presidents relied on "front-porch campaigns," where they declined to do big rallies and won by simply staying close to the White House.

In this modern-day contest, Brinkley said, perhaps it would become a virtual front-porch campaign.

"They will seem to be everywhere, but they may be on your television set or phone," Brinkley said. "You may never see them in person or experience one of their rallies."

For now, the campaign is not playing out in critical battleground states across the country, but rather with Trump at his post in the White House briefing room and Biden settling into his television studio in the basement of his home, about 120 miles away in Delaware.

This story has been updated with additional poll data.